On January 31, I noticed a huge sun dog just as the sun was beginning to set behind our house.  It was brutally cold that day, and there was too much snow to run out into the field and get a full picture of the phenomena, but this was the most circular sun dog I'd ever seen.

What is a sun dog?  Wikipedia explains:

Sun dogs are commonly caused by the refraction and scattering of light from plate-shaped hexagonal ice crystals either suspended in high and cold cirrus or cirrostratus clouds, or drifting in freezing moist air at low levels as diamond dust.

That's right, we have diamond dust here in Wisconsin.  We are very fortunate.  And it truly is beautiful.

When I was a kid and Dad would see sun dogs, he would always say we were in for a big change in the weather; look out, another snowstorm is on the way.  Well, I have carried on his tradition, and when I saw this massive sun dog, I told Carl we'd better get the shovels front and center.

This has been one snowy winter so far.

Most of the snow has been of the light variety, almost like the fluffy flakes seen in Hollywood Christmas movies, wafting down in lazy circles, seemingly in slow motion at times, landing without a sound.

I was curious about how 'snow' is made in movies, so here's a video explaining the process:


Well, that was interesting, but the video didn't mention how they clean up the paper, did they?  I think I'd rather shovel real snow.


The snow in yesterday's video was nice and calm.  However, we had sleet last week Friday which fell like a hard summer rainfall, similar to hail, only tiny, round pellets with no wind to drive them, and dropping straight down out of the sky.  The pellets hit the tin outhouse roof, bounced a little and then rolled off like minuscule marbles, forming a circular ring on the ground. 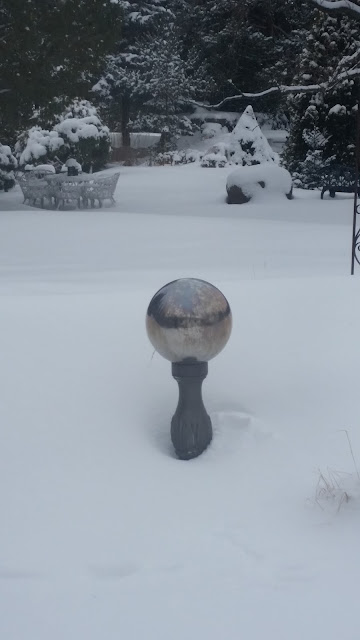 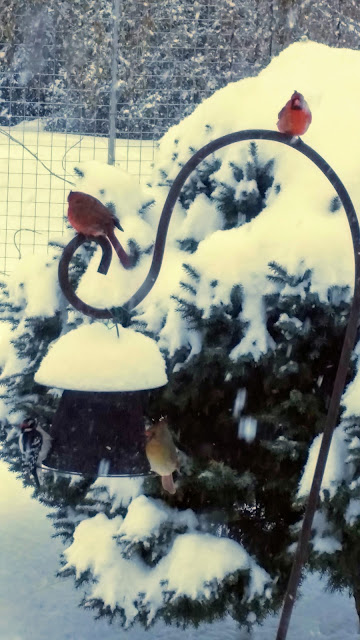 The bird feeders have been a constant flurry of activity, too.  My cellphone doesn't take the greatest photos, but we have a flock of cardinals here who have been brightening up the yard with their brilliance, along with chickadees, blue jays, sparrows,woodpeckers and many others. 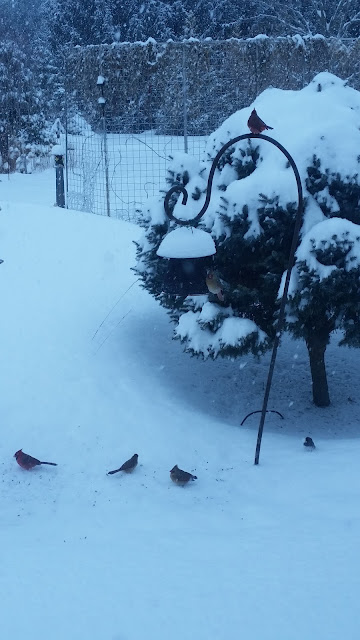 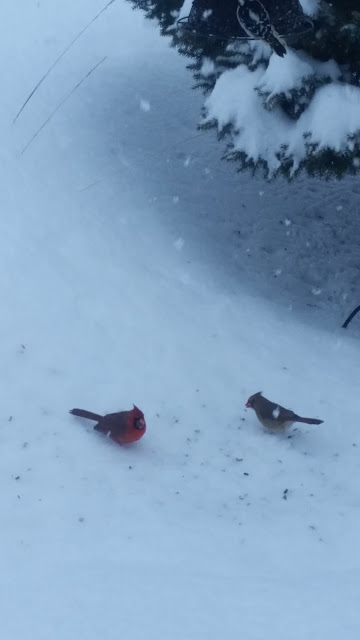 When Mom came to live here in February 2016, we brought her bird feeder with us so she could see her beloved cardinals.  I went from one bird feeder of my own, to two, and now, this year added a third one.

My original bird feeder was glass and had bird images and flowers embossed in the surface, but last March something (probably a raccoon) knocked the feeder off the pole and the glass tube broke in several pieces.  Carl decided to replace the glass with wire mesh and the birds love it. 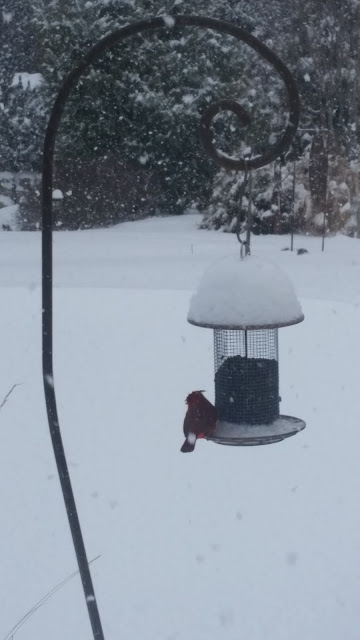 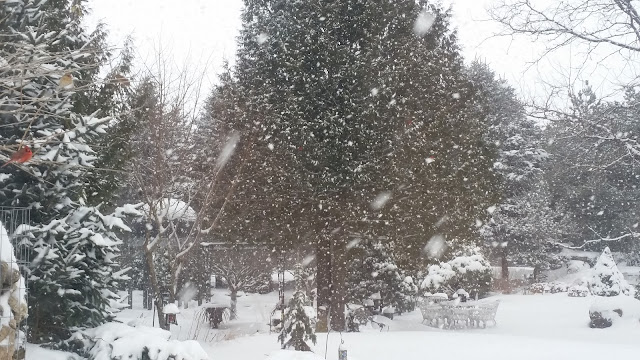 The backyard snowbanks are getting higher and higher and I have to shovel my way out to the feeders at least every other day to keep them filled.

Mom's feeder was a Droll Yankee Flipper, the kind that will spin when a squirrel climbs onto the perch, but the flipper part wore out, so now it's just a feeder.   Though it's hard to see from here, I hung a wire waste basket over the top of the feeder to ward off hawks who are also attracted to the bird feeders for prey.  The birds seem to like having the extra seating available while waiting for their turn at the buffet, too. 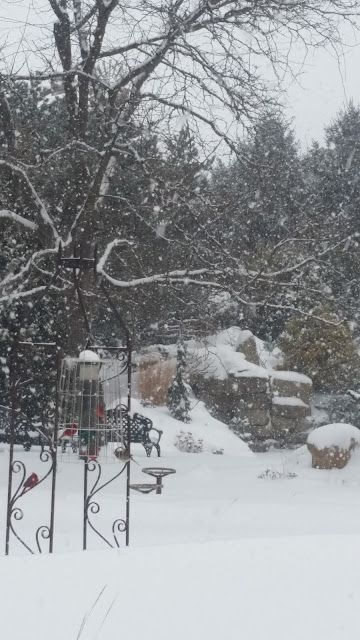 Last month, Carl welded up a garden ornament for me.  It was made from some old nails that had been part of a homemade garden drag we'd built when we first put our lawn in.  The wooden parts of the drag had rotted almost entirely away, but the nails remained.  While cleaning up in the yard, I was going to toss the whole thing into the trash, but Carl disagreed with me.

Strenuously.
I admit, I was angry about his wish to hang on to the junk, but also have to admit he made something beautiful out of nothing once again.  Sadly, we don't see eye-to-eye on the junk around here.  I realize he's capable of making something out of just about everything, but man, oh man, he's got a LOT of everything. 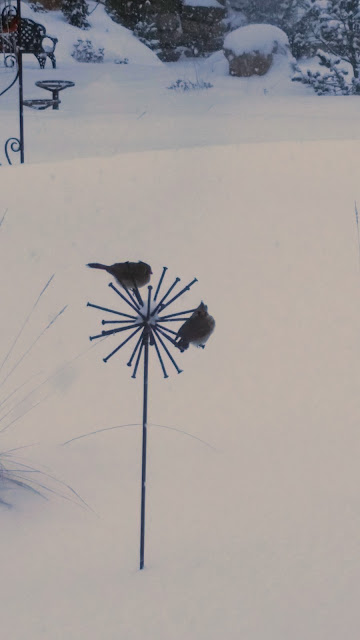 The birds really like the 'Nail Allium' though, so I'll stop kabitzing.  For now.

I hear another snowstorm is headed our way, beginning tonight and into Tuesday.  This storm already has a name, 'Snowstorm Destiny'.

When the storm is given a name, we're supposed to pay attention.  I'm not sure what this one will do beyond heavy snowfall and high winds, but one thing is for certain, we know what our destiny will be once again.

It's time to stock up on gasoline for the tractor. 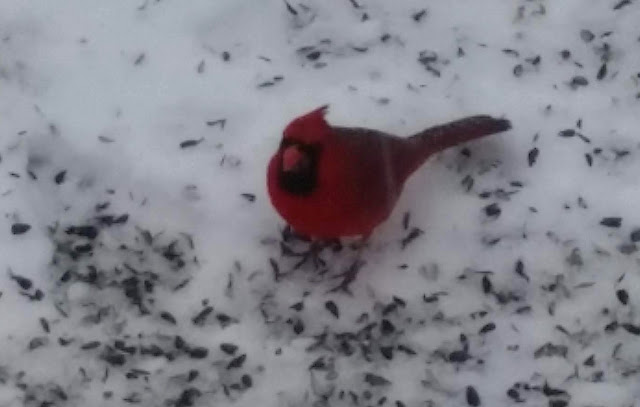 Yes, it appears this will be a snowy February. Our forecast is for 6-9, and yours is for 10-12, right? And then several more snowstorms over the next couple of weeks... Personally, I'd rather have the snow than the polar vortex. We have a snowblower so that helps. I love your nail Allium! So creative! Nice hubby!

I love your nail Allium. Carl is a pretty clever guy, you should hang onto him. I miss the pretty bright red cardinals we used to get at our feeders back east, loved seeing your photos of them. I'd forgotten about your tufa outhouse, the photo of it from the summer was a joy to see.

It's a good thing that Audrey is around to make sure that everything is ship shape! What would you do without her to supervise? Carl is so talented and has great vision for what to do with stuff. He could retire from his job, make yard art, and sell it at garden shows. The nail allium is beautiful as are your cardinals. (Envious of them but not your snow.)

I would totally love to adorn my garden with some of those nail Allium ornaments! I see an online business in Carl's future.