Christmas has come and gone already.  I was probably more unprepared than ever this year, which is an understatement.  I didn't get the tree up until two days before Christmas which is really too bad.  I like to have things decorated much earlier so we can enjoy the season beforehand, but time just got away from me. We had a white pine out in the Back Eight that had developed a double leader, so one night just before dark Carl and I cut off the smaller of the two trunks for our tree this year.   Not a perfect tree by any means, but the price was right.  Free.  And the best part is, the tree we sawed it off of will now grow stronger and straighter.

Though I wasn't ready for the holidays indoors, I did a lot of decorating outdoors.  Just because I wasn't prepared this season, doesn't mean other folks weren't.  I wanted to show you our little town's display for Christmas.  We were driving through town one Sunday evening during the first snowfall of December.  With the snow coming down, the scenes reminded me of my favorite holiday movie, "It's a Wonderful Life".  Our farm is a few miles away from this little city of just over three thousand people.  When we 'go to town' to buy groceries or gasoline, go to church or the doctor, this is the town we are headed for.

The city has an area set up for residents to honor their lost loved ones by decorating a memorial tree. 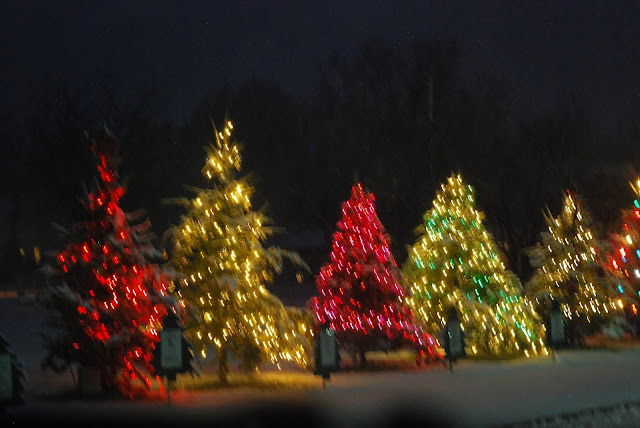 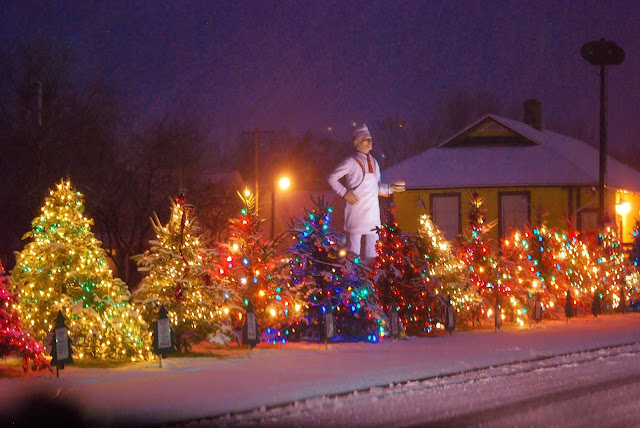 This is Seymour, Wisconsin, Home of the Hamburger, by the way, and the big fella standing in the midst of the gorgeous trees is none other than Hamburger Charlie.   Every year the town celebrates 'Burger Fest' with a giant parade and other fun events, Joel even was able to take a ride in a hot air balloon one year. 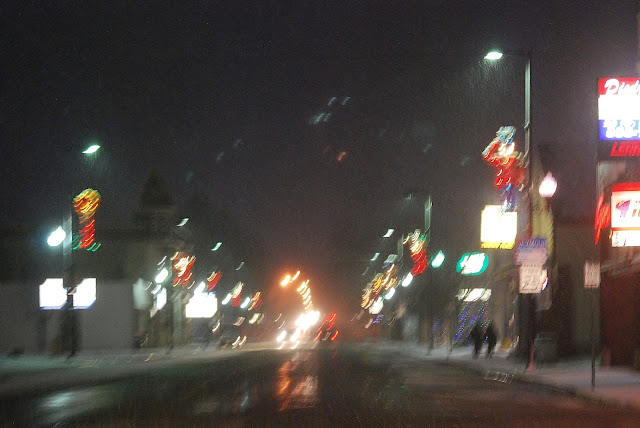 Blurry pictures, I know, but this is Main Street on a snowy December night. 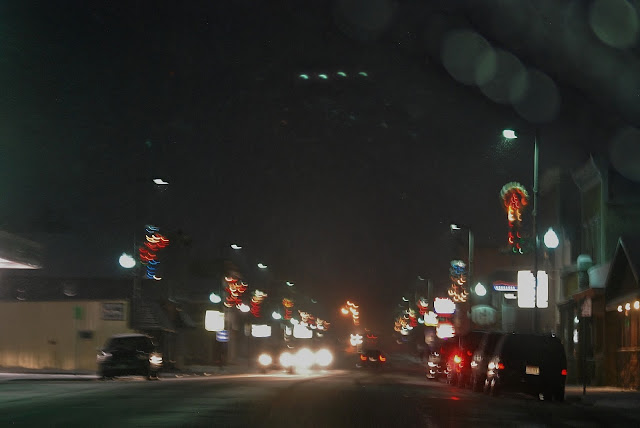 There is one grocery store in town, a post office, two schools, and an almost equal number of churches, gas stations and taverns.  This is a typical small town in our area, and though I do not like cities of any size, this one is my favorite.  Once upon a time in my childhood, there was even a movie theater; I'll never forget watching 'Gone With the Wind' in the red velvet seats. 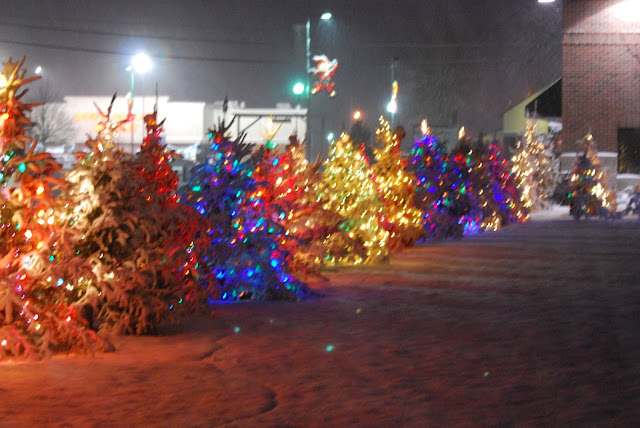 Meanwhile, back at the farm, here's some of our holiday decorations:

I realize poor Ernie looks a little goofy this year.  Apparently a very large bird laid an egg in the nest of pine boughs.

I hope everyone had a very Merry Christmas!  We certainly did.  Happy New Year, too!! 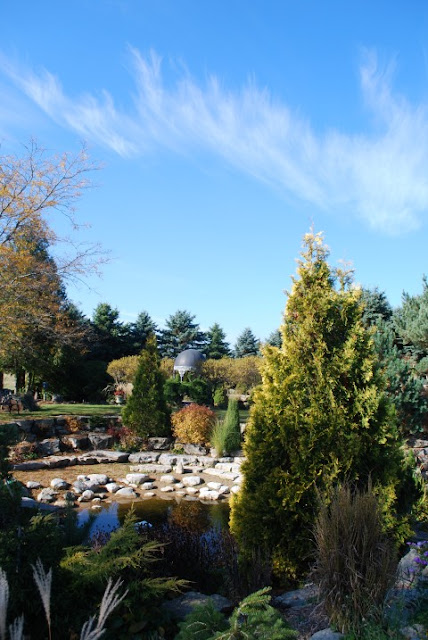 And then there was Mom.  The Elusive Lucille fell ill in November with a very bad cold.  The week before she had been here helping me in the garden.  I was able to surreptitiously snap some photos of her from a great distance without her knowledge while Joel was kayaking in the Quarry one day.  Mom thought I was taking pictures of him, and I was, but I had ulterior motives, too. 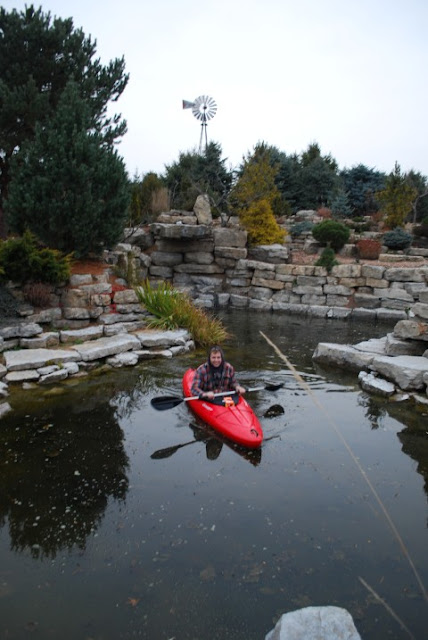 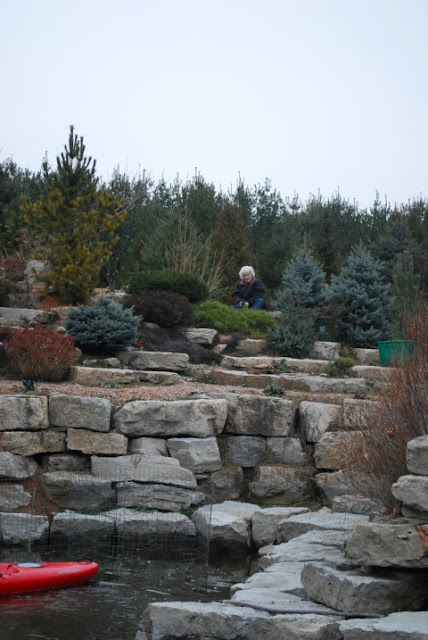 If Mom knew the camera was aimed at her, she would have fled the area like usual.

A few days later, Mom was coughing and sounded terrible.  And she fell a few times, too.  Mom is stubborn and never wants to 'bother' me with 'silly' stuff, like falling down and feeling weak.  I threw a fit when I found out and insisted she go to the doctor.  She resisted, I insisted, and I hauled her in.  The doctor didn't mess around and put her on medication right away which is a good thing since her cough was deep in the lungs.  Thankfully we caught it before pneumonia set in.

I took her home and did a little cooking for her, not much, but insisted again that she at least try to eat something.  She was not thrilled with my domineering ways, but she gave in and dutifully nibbled at her food.  She put her foot down when I said I was going to stay with her until she felt better.  My mother is a very private person and enjoys solitude and doesn't want to be a 'burden' to me.  I live less than a quarter mile away so she often says she has an assisted living lifestyle, which is true, but it doesn't make me worry any less.  One fall and she could be in serious trouble and I wouldn't know until the next time I checked on her, which could easily be hours on end if it happened at night.

So, what I did was go up and check on her several times a day and night for a few days.  I didn't want to wake her up at night, so I took a five gallon pail and placed it on the lawn under her bedroom window.  I stepped up on the pail and aimed my flashlight beam onto her bedroom ceiling, illuminating her room.  From my precarious perch I could tell if she was safely in her bed.  And she was.  I would hover there for a few minutes and then sit on the pail, listening for awhile.  After I was sure she was ok, I'd walk back home again in the dark only to repeat the process in a few hours.  I wasn't getting much sleep this way, but I was getting a lot of exercise.

I'd been nagging her about getting one of those alert buttons she could wear around her neck at all times, but she'd always frowned on the idea in the past, so we never bought one.  It wouldn't do much good if she wouldn't wear it.  However, this time Mom agreed that maybe she should have one especially when she had fallen a few times and wasn't sure how long she'd been lying on the floor.  (Gosh, that scared me.)

I went ahead and ordered a 'Freedom Alert' button that we could program to call family members in succession instead of an outside company.   Mom seemed happy to know she wouldn't be 'bothering a stranger' when she needs help, but it still bugs her that she is supposedly bothering me.  Joel and I helped her with the learning process and showed her how it works and we run weekly drills so she doesn't forget how to operate the alarm.

There is only one thing that completely confused Mom about the alarm.  When the unit is activated, it dials my cellphone first.  After I pick up the phone, the recording says, "This is an Emergency.  Please press 5 to stay on the line.  If you do not press 5, this call will be terminated and we will call the next number on the list.  Please press 5 now."

The alarm unit asks for the person being called to push 5 in case it would reach an answering machine or a small child.  If no one at the first number pushes 5, the unit disconnects and dials the next number on the list and so on and so forth.   The alarm keeps calling the programmed numbers until it reaches someone.  The fifth number can be programmed to dial 911 if you want it to.

It took us many, many drills to reassure Mom that she did not need to do anything when the voice on the alarm told her to Press 5.  She was desperately looking for a 5 to push on her pendant, but of course, there isn't one.

"All you have to do is push your blue button, Mom.  The voice is asking me to push 5, not you.  You just wait and when you get a connection to me or Carl or Joel, you'll know because we will talk to you through your pendant."

I told her I was going to leave and she should push her alarm button in exactly five minutes.  She did as I asked, and it worked fine.  Then I told her I wasn't going to answer it and demonstrated how it went to Carl and Joel's phones next.

After two weeks she has been feeling much better which is amazing.  She had been so sick, so fast that I feared the worst, but yet made almost as quick of a recovery.  Though I know she is 92 years old, it is hard to reconcile myself to the fact I could lose her since her personality hasn't changed very much over the years.  She has her days when it's hard to remember some things, but don't we all?  She is very quick-witted and never depressed.

The alarm button/pendant has been permanently attached to her; she's been very good about it.  She set it off accidentally last Friday when I was about sixty miles from home and my heart was racing.  My cellphone rang and when I answered, I could hear her TV in the background and nothing else.  I said, "Mom!  Are you OK?  Mom, can you hear me?  What happened?!"

"I can hear you...who is this?  Where is this voice coming from?"

"Mom, it's me, Karen.  Are you OK? I'm talking to you through your alarm around your neck."

"Don't hang up, Mom.  (There is a button on the back she can push to hang up, but I didn't tell her about that because I didn't want to confuse her more.)  Are you sure you're ok?"

"Yes, I'm fine, I must have leaned into the cupboard reaching for a dish.  I'm sorry to bother you."

"You didn't bother me, never worry about that!"

We chatted for awhile and I told her how to push the button to hang up.  I think she's got the hang of it now.

She's seemingly back to normal again.  Housecleaning was her order of business this past weekend, with vacuuming, dusting and floor scrubbing on her hands and knees.  I volunteered to help, but she refused my offer.

"I've got it under control," she said.  "I'm sure you have plenty of your own cleaning to do."

(That's an understatement if there ever was one, oh, my poor, neglected abode.)

"Ok, Mom, just don't forget to push your button when you need me, ok?"

"Don't worry so much.  You'll get gray hair.  We all have to die sometime."