Well, where have I been?  I haven't had time to post anything or visit my blogging friends; most of the time we haven't had time to even sit down and eat.   Hard to believe I haven't posted since May; time is just flying by.  So much has happened this summer and it will take me many posts to catch up on all the activity.  I uploaded hundreds of pictures from my camera tonight.  Obviously they won't all fit in one post, so I'll have to spread this out over time.

The major event of the summer is over, Joel and Abby's wedding on June 27.  It was a beautiful day and everything went perfectly.  They have not received their photos from the photographer yet, so I will wait until I have my copies to share.  I have a few of my own in the meantime:

There will be LOTS more photos to come on the wedding as soon as possible.

We had another wedding in July, one week after Joel and Abby were married.  Friend Ann's daughter Jessie was married here at the garden. We were lucky and had another beautiful day.

I want to write separate posts for each wedding just as soon as time allows and I have all the photos.

Along with all the wedding fun, we've had visitors galore here again this year.  Bus trips, conifer conventions, our annual booyah party and people calling from the 'Our Wisconsin' magazine article from 2014.  A rough estimate this year is approximately 400+ people have come to see us here in our rocky paradise.  Since May the visitors have been constant.  We have one more garden club touring August 24, and then things will quiet down some, at least with scheduled visits.  We do have two more weddings in September and October, though.  It is really nice to have people come to visit; sometimes we get so jaded with the work that we forget to look at the garden.

And it's good to leave the garden sometimes, too.  I had a doctor's appointment today for a thyroid check and we were gone for a few hours.  When we came home it was near sunset and we slowed down on the road to appreciate the light.

I always tell people they can't miss us, it's the little white house with the brown roof and flowers. 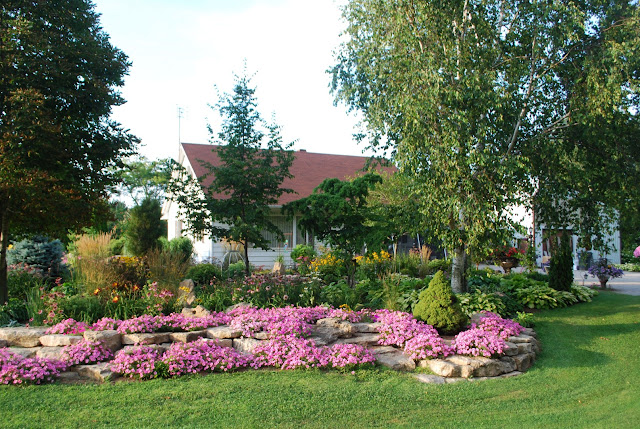 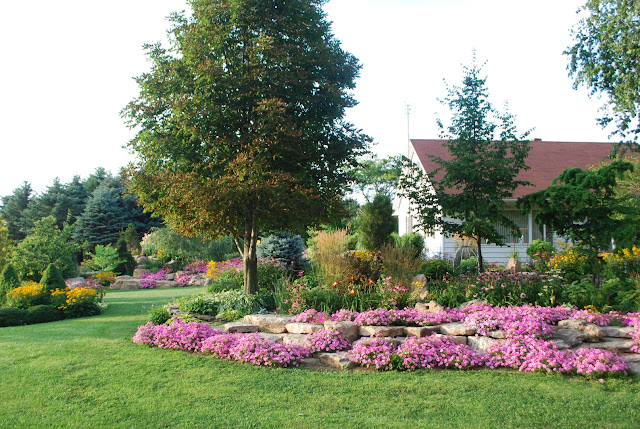 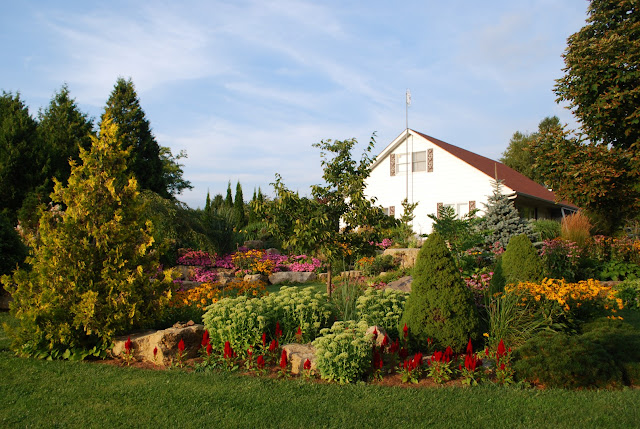 My color scheme hasn't varied much the last few years, but the Supertunia Vista Bubblegum petunias put on such a show that I can't resist them.

So, in a nutshell, that's what's been going on around here since May.  There's lots more to talk about, but it is after 2AM.  This ol' gal definitely needs some sleep.