The end of September is nearly here and it is high time I update the progress and lack of progress on the remodel. 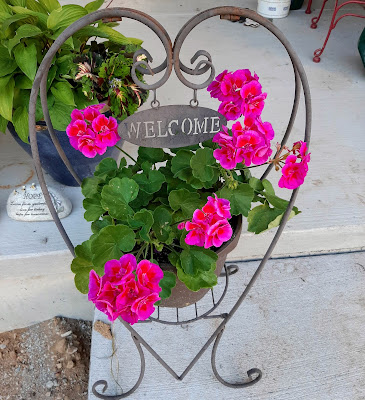 Since it has been over a year since we started this adventure, we're sort of shame-faced we're not further along, but with us, every project takes more time than we originally thought it would.  Add Covid to the mix, and well, everything gets delayed.

Anyway, picking up where I left off in April 2020, we needed to have carpeting installed on the upstairs staircase. 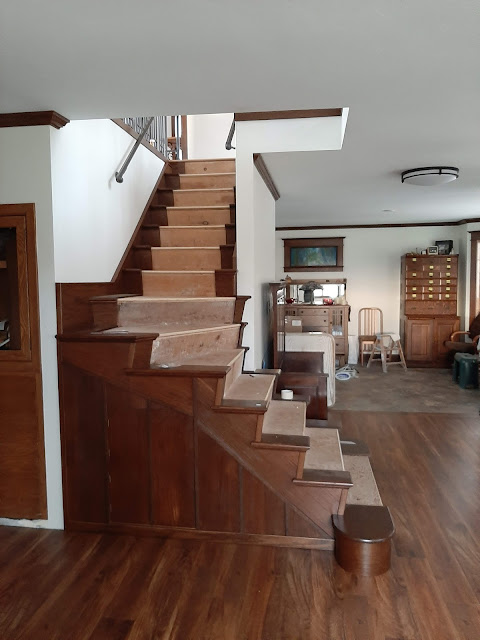 Carl had fought with rearranging the entire staircase in October 2019.  This is the only area of the house to be carpeted as every professional advised us wood steps would be beautiful, but also slippery and therefore dangerous.  Since I've already demonstrated my ability to descend staircases on my derriere more times than I care to count, yes, please, bring on the carpeting. 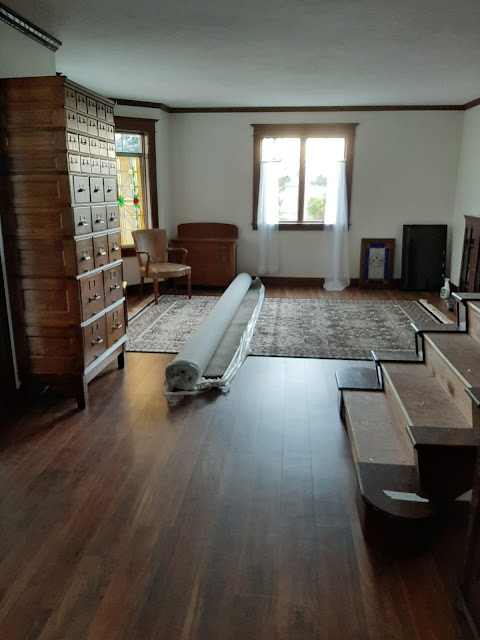 I was able to order the carpeting right from home using our sample number and the carpet installer went to pick it up so we didn't have to leave the house at all. 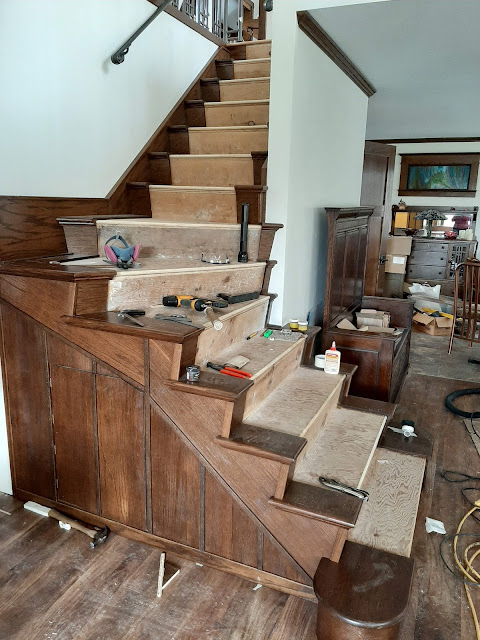 Before the carpet could be installed, Carl had to figure out how to cover the formerly plastered wall with hardwood and add the step caps to the outside of each step. 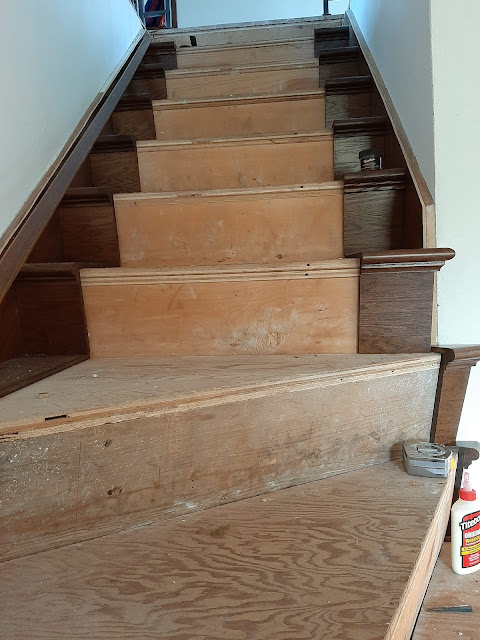 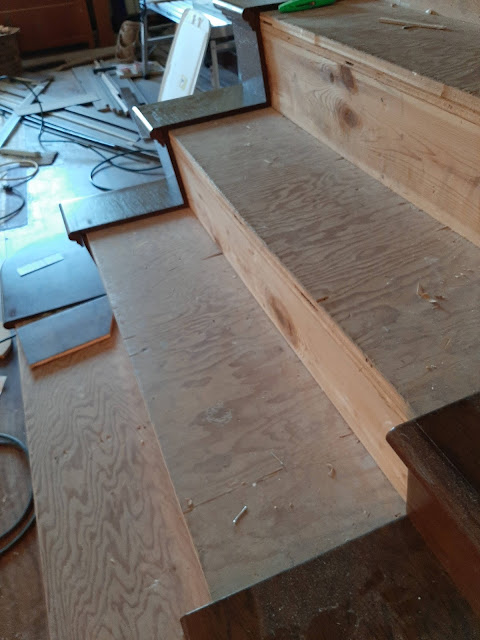 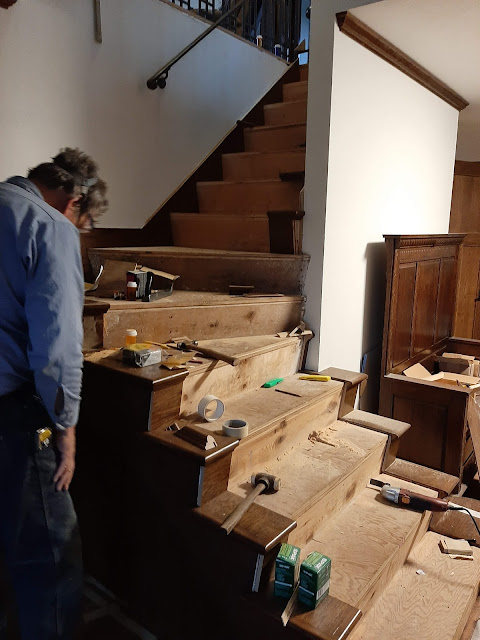 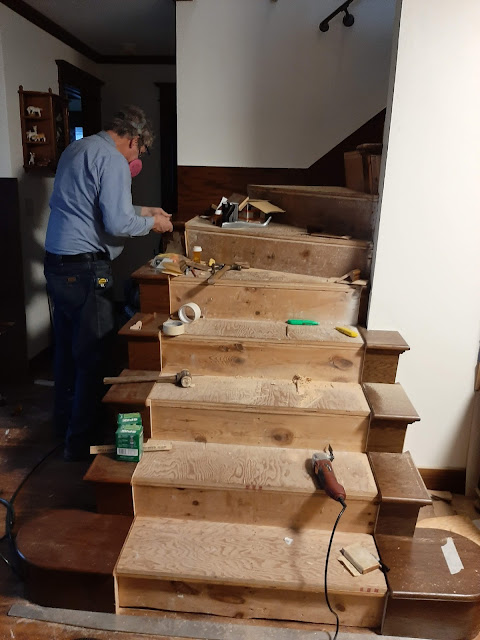 The carpet installer came in late April and we vacated the house while he worked here alone for the sake of social distancing.  When we came back home, though, we noticed a problem with the installation due to height differences between the riser and the additional wood trim, so the installer had to come back at a later date to do parts of the job over. 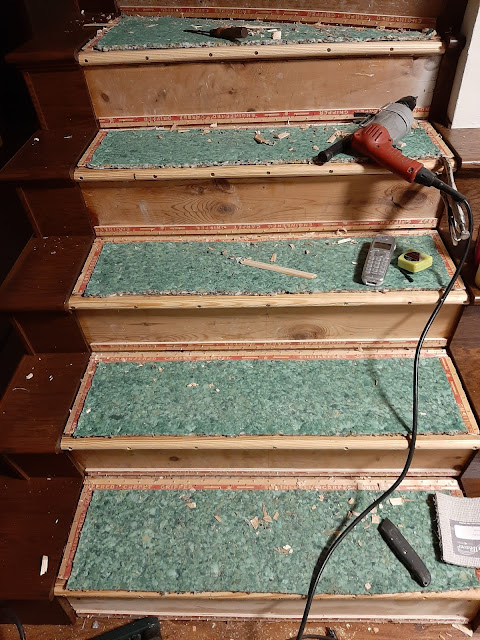 Finally, by May 4, the stair carpet was done. 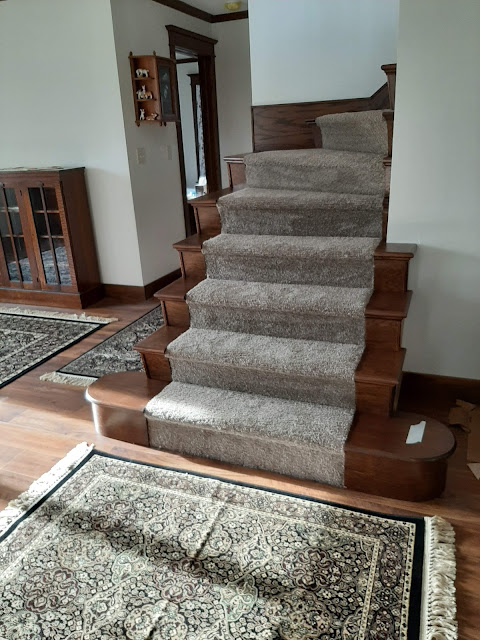 By May 12, Carl was working on the staircase railings.  He had some complicated math to work out, so we put up a temporary handrail for the time being. 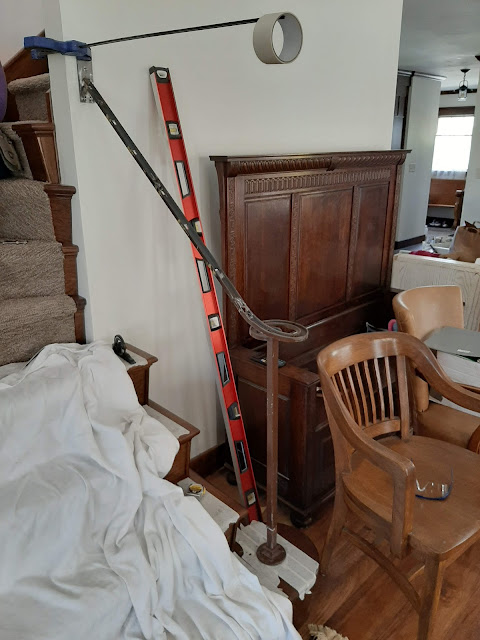 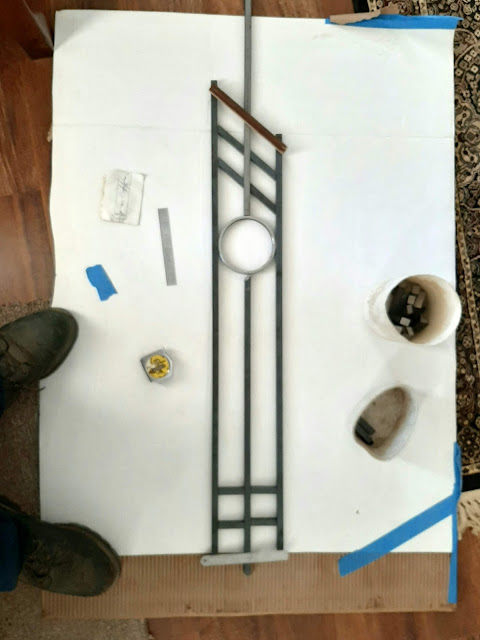 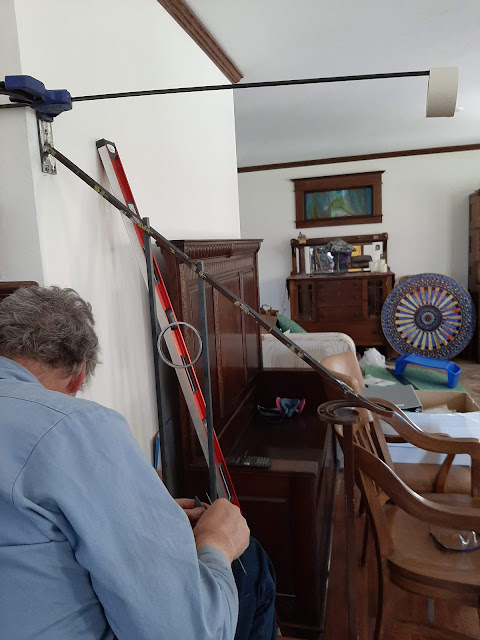 With Spring springing up all over the yard, we decided to put a halt to the indoor work and focus on the front garden landscaping.  Everything in the front yard had been torn out prior to the remodel, so it was dismal coming home to a big mess in the front yard.  And besides, the gardens themselves had been neglected for almost a year, and Mother Nature takes back her domain in no time when the gardener is a slacker.  Oh the weeds! 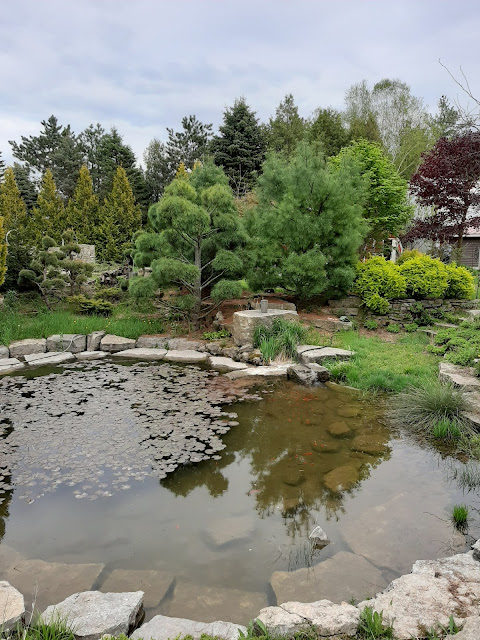 The Quarry Pond was at a nice level in early May, but the landscaping was full of weeds.  I really didn't know where to start, but decided it was high time to downsize a few more areas.

The Quarry Bypass Trail with the split-rail zig-zag fence was something I really hated to part with, but I had no time to weed the area any longer, so I took out the fence and relocated the hostas to a shadier area near the Formal Garden stone wall.  Now that the plants are gone, I merely have to mow the area. 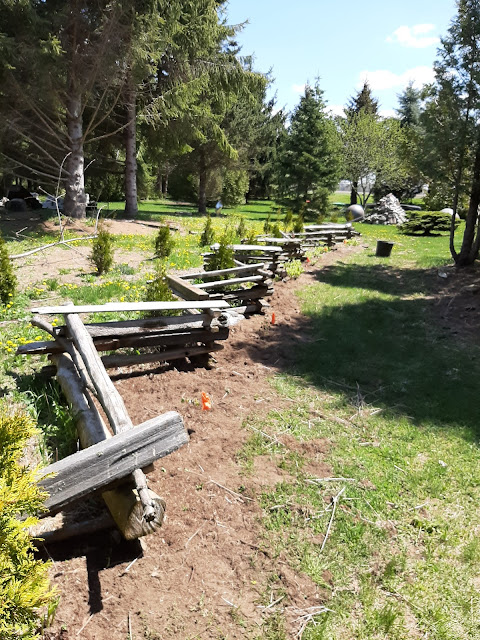 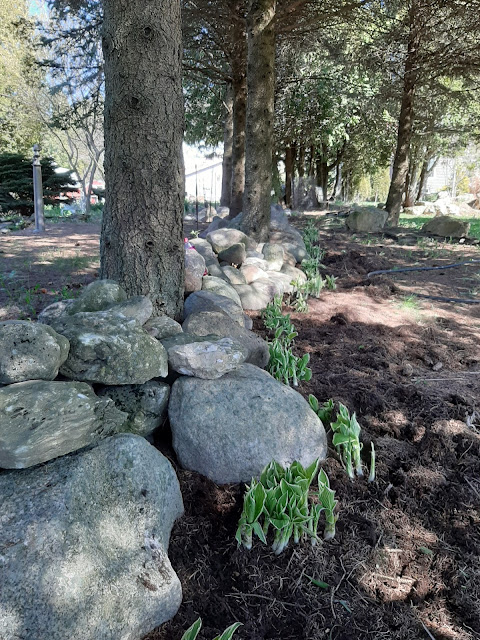 The hostas are much happier in the shade again.

Joel and Abby had been waiting to plant their lawn since they moved in to their new home in December of 2018.  Carl and I went up to help Joel rake up stones and plant grass seed May 23. 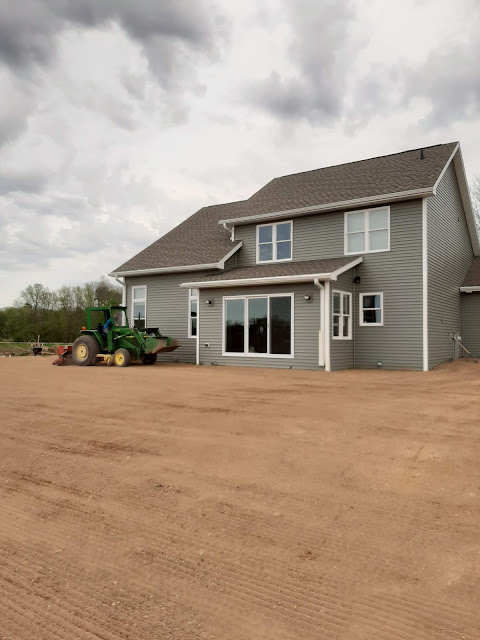 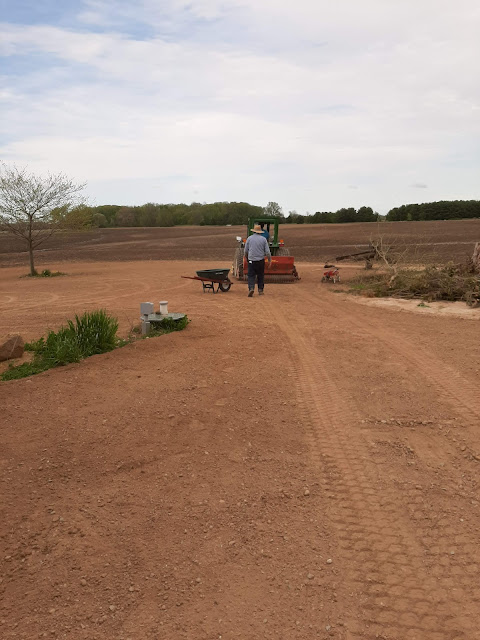 The next day, Sunday, May 24, Joel and I took two of our tractors and joined a neighborhood tractor parade of approximately 30 other tractor enthusiasts, going 20 miles around the area to drive by some neighbors who have been struggling with their health. 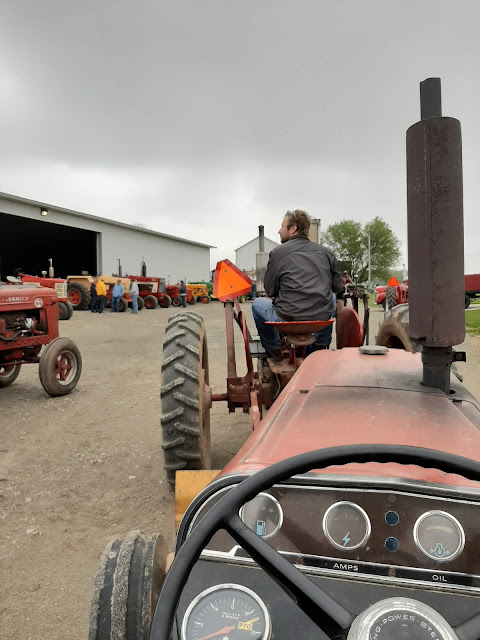 Joel is parked in front of me and I followed him the entire route. 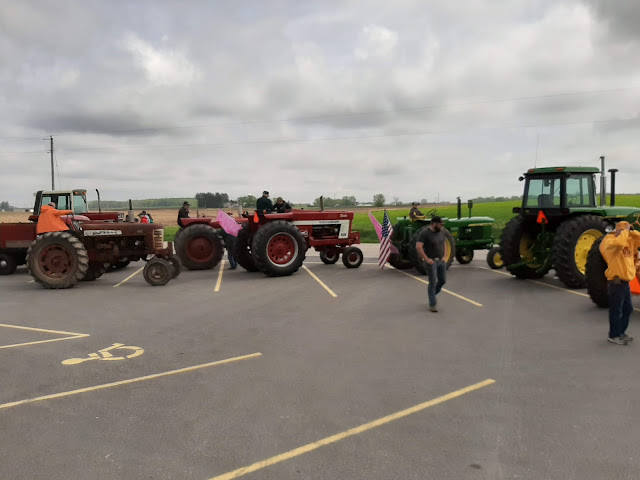 Everyone took a break at noon for a lunch at a local golf course where we ate outside.  I never thought I'd drive my dad's 1972 tractor and Joel's 1954 so far from home, but it was fun and worth it to see the smiles on the faces of the people waiting for us on their front lawns.  There's a feeling I can't explain when you see that many old tractors all together going down the road, it never fails to choke me up.  Joel and I left home with our tractors (top speed of about 18 mph) at 9AM, drove the 20-something miles and arrived back home at 3PM.

We all need a break from stress and worry during these times, and what could be better than a few hours driving across the countryside on an antique tractor waving to happy people? 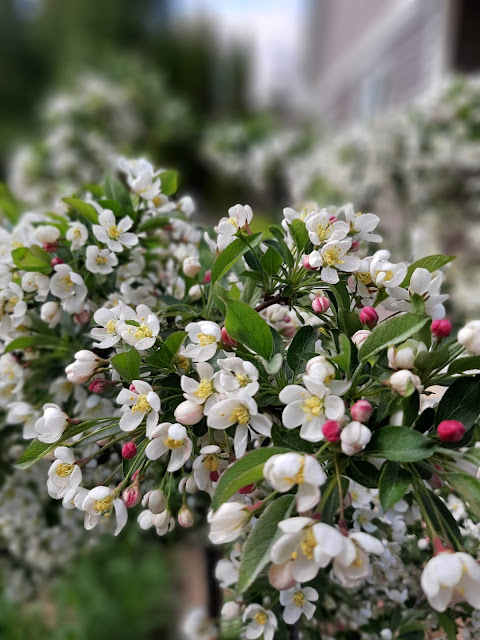 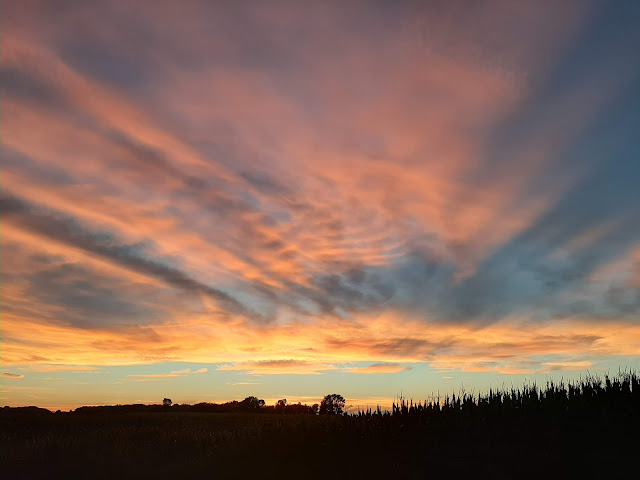 Summer is over and fall is upon us once again.  This year has been challenging in so many ways, but we're still here.

The hut remodel is still dragging on, we are getting down to the smaller details now, but there is still a lot to be done before the snow flies.  I've been absent from blogging due to lacking time to write as much as I'd like.  We've got the ongoing construction here and sadly, the demolition of my late mom's house at the moment, so it seems all we do is work, but I guess it keeps us out of trouble.  :-) 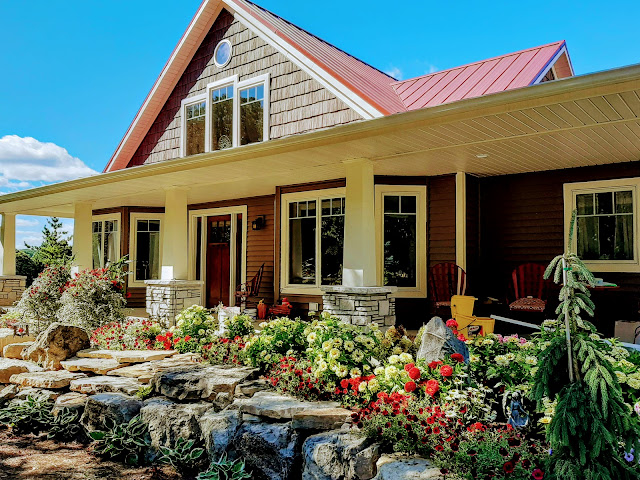