Hard to believe we're already entering the third week of May.  I don't know where the time has gone.  So far, this spring has been very dry.  We've been exceedingly lucky that we haven't had any severe weather like other parts of the country had earlier in the month, though.

We were fortunate to have one half inch of rain on Monday which helped quite a bit.  The farmers around us are nearly all done planting their crops; it certainly was bizarre seeing dust rise as they worked land in May. 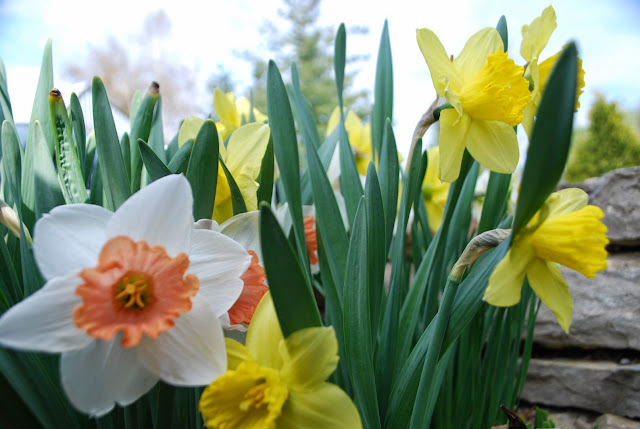 Work here has been, like always in the spring and summer, hectic.  We're trying to get a lot of things done all at once for upcoming garden walks and weddings.  The calendar is full of dates for when people will be visiting; I just hope I remembered to write them all down. 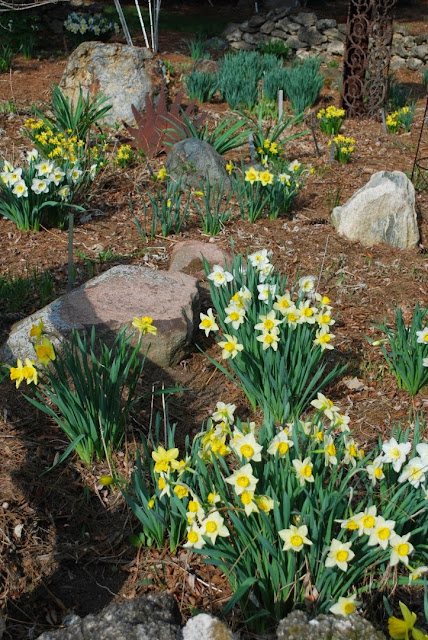 The daffodils are getting long in the tooth already and the hostas are starting to pop out of the ground at a rapid rate.  I've been weeding as fast as I can.  I had to lock the hens in their run for the summer; they've been a big help catching bugs and scratching around, but the hostas are just too tempting to resist.  Some cultivars must be extra tasty because the chickens had certain varieties pecked right down to the ground. Any time I put mulch down, they have to see what is under it and mulch goes flying everywhere.  Sorry, Girls, it's time to give this ol' gardener a break. 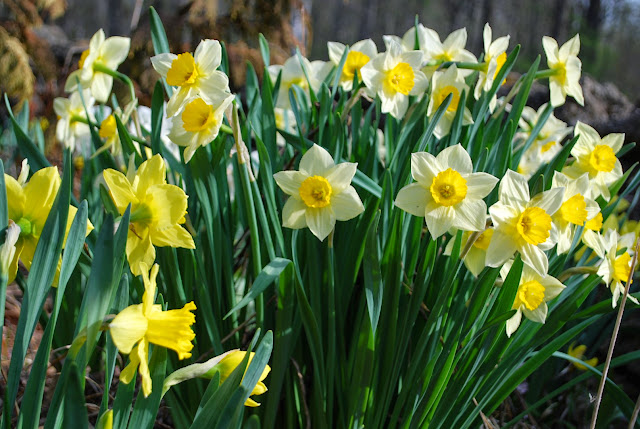 I've been working in the greenhouse part of the day, getting my pots planted up and making cuttings of annuals I want to propagate.  Last night the temperature dropped to near freezing, so we had to make sure everything was covered in the greenhouse, too.  I haven't planted any annuals out in the garden yet, around here the last frost date is June 1. 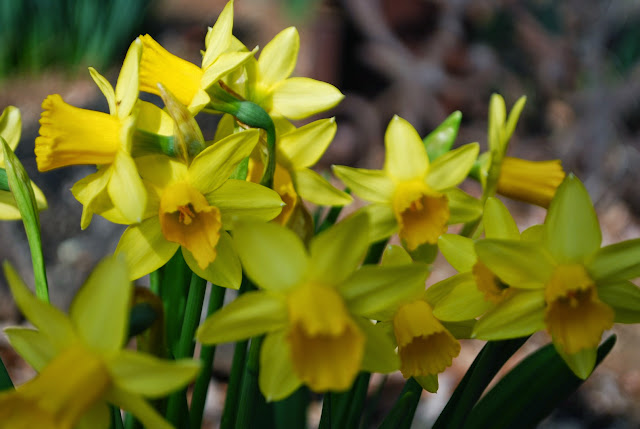 Grass is growing, weeds are sprouting, trees need pruning, everything happens all at once in the spring, doesn't it?  Sometimes it is completely overwhelming!

We generally try to pick the worst problem first and deal with it, but this year, that is proving to be a difficult task.  Since we had no snow cover to speak of last winter, we had alot of plant damage along with a lot of frost heaves-- we've had rock formations shifted substantially and everything will need work. 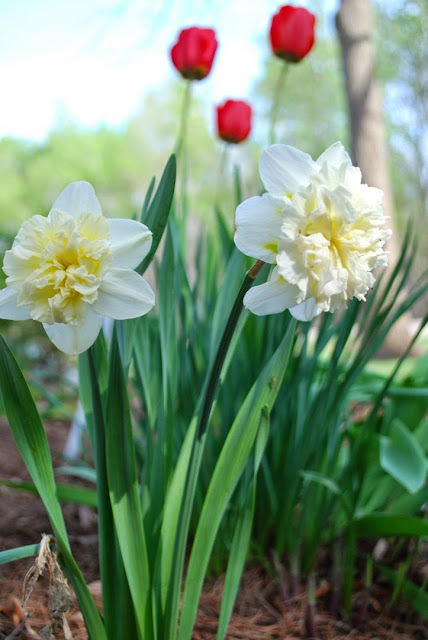 I was walking through the hosta bed the other day and came across the above sight, 'Golden Shadows' dogwood in early leaf against a black rock looks like little butterflies, doesn't it? The trilliums are almost done blooming, too.  I wish spring flowers lasted longer. 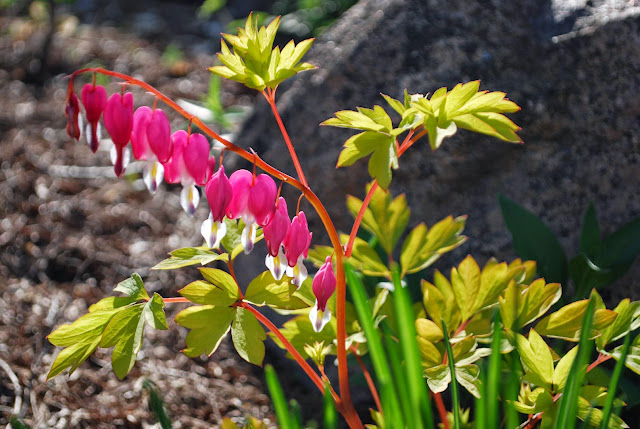 I was glad to see 'Gold Heart' dicentra pulled through the winter.  There were many plants that did not. 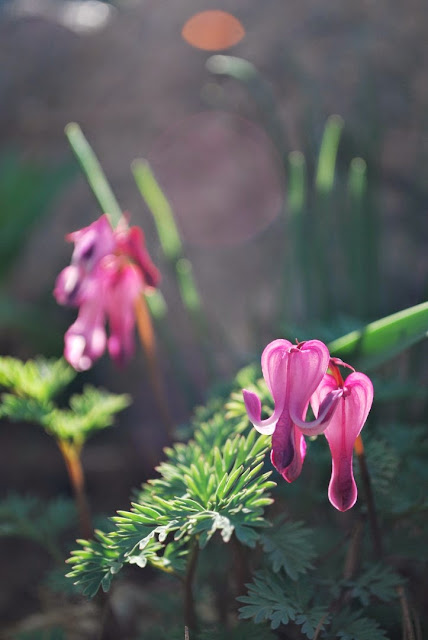 I'm not sure if this is 'King of Hearts' or 'Luxuriant' dicentra, but by any name, it's still pretty. 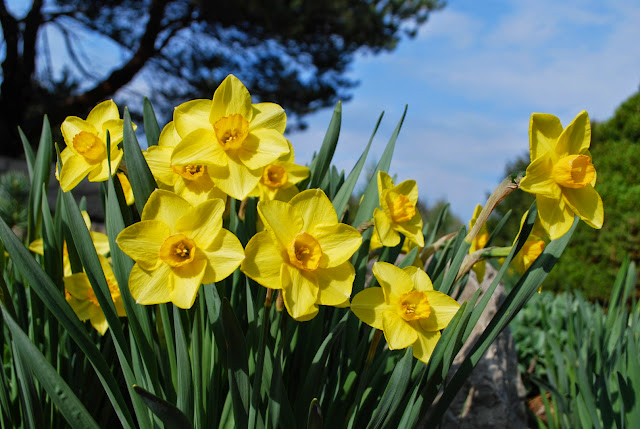 I haven't been feeling fantastic this spring; I think it's mostly related to thyroid (again!) and stress.  I don't sleep well, which then leads to keeping later hours than I should which I know is not good for me.  But what's the point of tossing and turning in bed if I can't sleep?  Might as well cut out the middle man. (I am working on keeping on schedule, I am.) 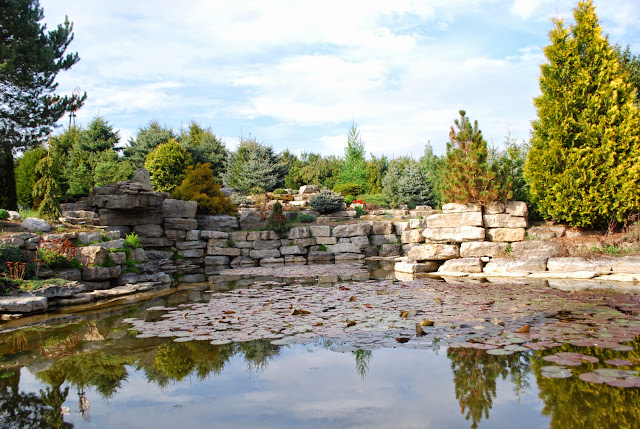 Here's the Quarry (while it still has some water in it) with early water lilies.  I see one is in bud already, it seems too early, but I guess it's just me.  Mother Nature is right on time. 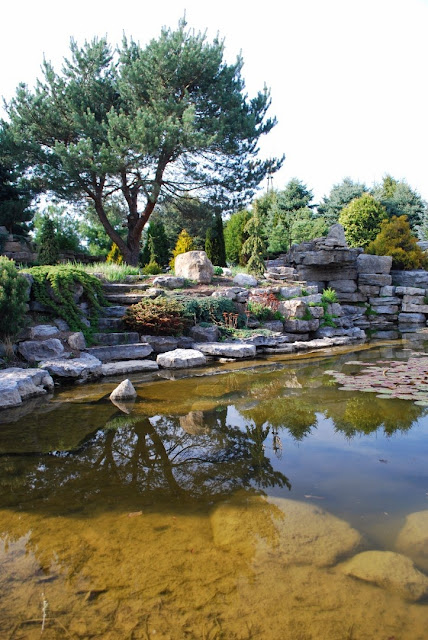 I was feeling extremely overwhelmed when I took these pictures and just plopped down on a rock and aimed the camera haphazardly.  Sometimes I need to get a grip and take a breather.  Everything that needs to get done will get done; and whatever isn't accomplished will still be here in the morning (or evening) or in the case of Castle Aaargh, in a decade. 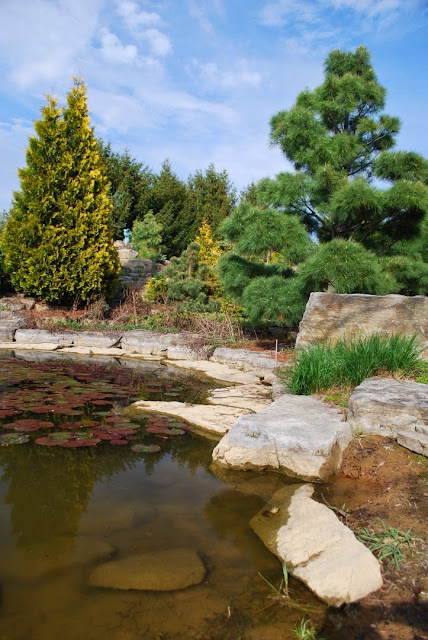 Visitors continually ask us, "Do you ever sit out here and just enjoy the view?" and our answer is always, "No, because then we see more weeds."  Sadly, that is the truth.  So when I took these pictures I thought what the heck?  For once I will sit here and enjoy the view.  (And yes, there are weeds, and lots of 'em.)

After I got done with my Quarry break, I decided to go get the planters in to the greenhouse so I could pot up their summer flowers.  When I tried to put one of the urns on the two-wheeled cart, the entire urn broke in two.  Oh, yes, now I remember; I hit this urn with the snowblower on our tractor one of the two times I removed snow last winter.  Looks like I did a good job. 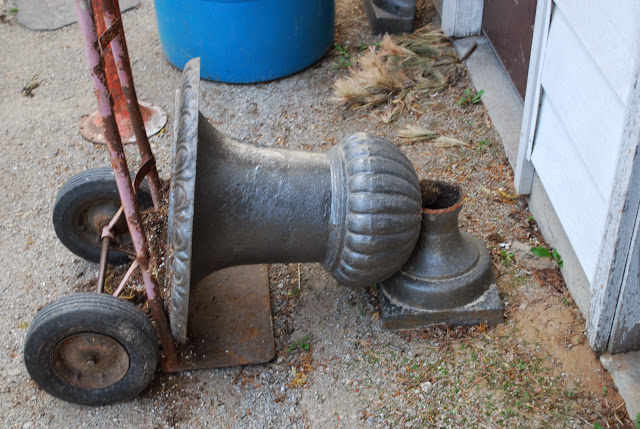 Luckily, Carl was able to fix it for me the next day. With a weld repair and a new coat of paint, it looked good as ever.  I was just sorry to make more work for Carl.

I forgot to write about Willie the Willow: we had to cut him down in March since he developed a long crack along one of the main branches.  The yard is just not the same without all the shade; I have no idea how the garden will fare this year.  It's all about change, that's for sure.  Where Willie stood we had a blank slate to work with; below is the end result of moving a few of our trees from other places in the yard.  We're really pleased with the look; these are all slower growing conifers that can be controlled with pruning for size to some degree.

I'll have to do a Willie Memorial Post soon and show some before and afters.  (But we Really miss the shade!)

We've already had our first visitors this year, a prom court from a high school: 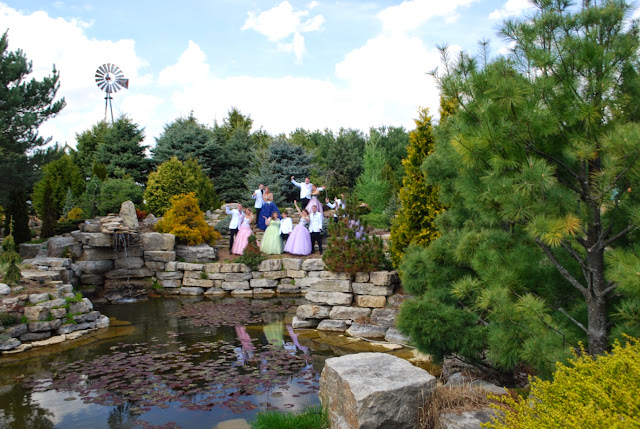 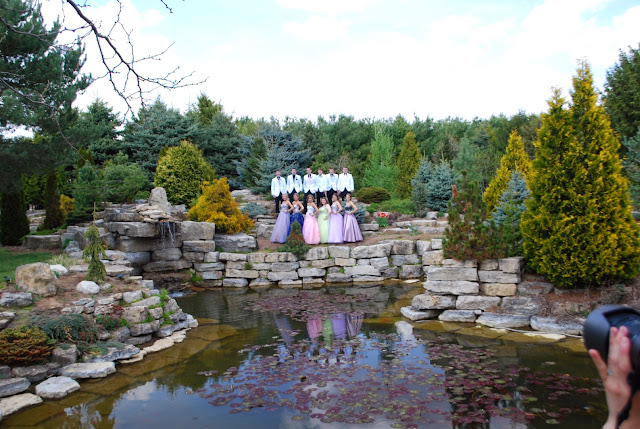 They were so young!  Were we ever that young??

I'm still exercising every day; usually walk ten to twelve miles on average.   Another new thing is my rebounder (mini-trampoline) that I bought in December, yet another post waiting to be written, but I will say this, that piece of exercise equipment has made a phenomenal change in my exercise.  I love it!

Our next garden event is a wedding coming on May 30 for photography followed by a bus trip of master gardeners from the southern part of Wisconsin on May 31. 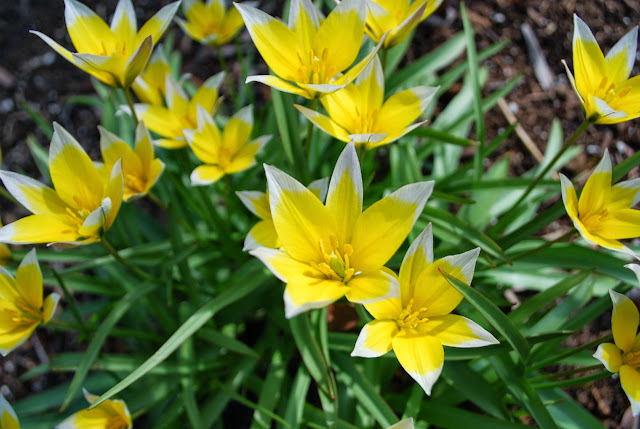