I didn't get as far on the shade today as I wanted to, though I did finish laying out the leaves and stem patterns for the first repeat.  This morning was taken up with laundry and other housekeepering chores.  I told Carl it would be nice if I could get a clone of myself to get the mundane work done around the house.

I've been rereading the book 'A New Light on Tiffany' which deals with the history of Tiffany Studios.  Clara Driscoll is on my mind a lot lately; it was she who was responsible for many (or most) of Tiffany's stained glass lamp shade designs.  It stated in the book that she lived in boarding houses for much of her adult life which would enable her to concentrate on the work at hand.  Carl suggested we move into a boarding house.  Not a bad idea.

Joel ended up taking his car into the dealership yesterday because it was acting up.  Turned out a mouse colony had moved in under his hood, chewing off a whole bunch of important wires to the tune of a repair bill for $176.  We looked at our car (which is the same model) and yup, same thing with ours.   Now the garage is a land mine of mouse traps to negotiate.  Always something!

Dale was our only company for supper this evening, which was a change from the near-constant company we've been entertaining.  I played Sheepshead Monday night until midnight with Ann and Vanessa which was fun.  Tonight I was able to do some grinding on the flowers and the aforementioned layout work.  It is going to be very cold the next few days, so I'll have to figure out some way to get some exercise, too.

Below is a sheet of what we call 'demon glass' around here (if you have a vivid enough imagination, you may be able to see a red 'demon' facing the right side of the sheet in this piece of glass).  This is the red glass I am using for the poinsettia, along with some highlights of the purple, too.  This piece is already used up, glass goes very quickly.  Lucky for us, we have a few more sheets of this color in stock. 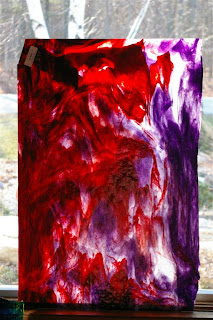 Not much progress to report

This weekend I had all good intentions of getting to work on the Poinsettia shade, but the road to you know where is often paved with good intentions, right?  I did manage to grind a few more flower pieces for the first repeat, but beyond that, not much else to report.

The reason for the delay is, happily enough, because we have had company all weekend.  We are truly blessed with friends of all ages.  This weekend was spent with friends of Joel's dropping in here and there and teaching people how to play Sheepshead...we had a great time.

On Tuesday,  I must get back to the shade.  Carl was working on the hardware for the Flowering Bouquet shade which hangs over our dining room table all weekend.  He has made some beautiful handmade chain and handwrought brass hooks for the mounting hardware.  Can't wait to see it installed.  We have to start taking pictures for consideration for the ASGLA calendar soon, because time is running out; February 1 is next Monday!

Here is as far as I got with the grinding on the Poinsettia flowers this weekend. 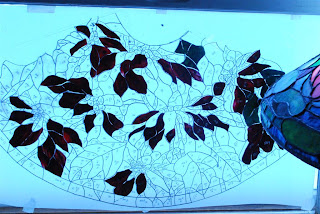 The pattern below shows one half of the design: 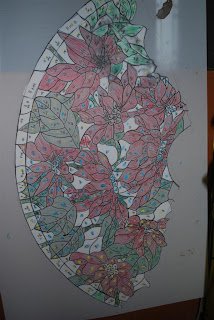 Some of the green glass I'm using for leaf selection: 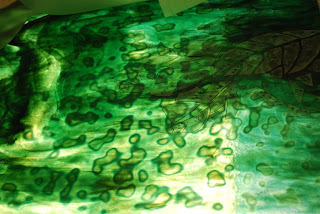 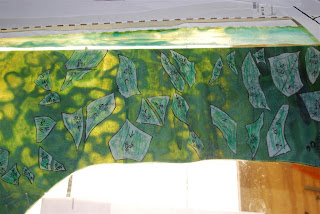 We finally finished up the quilt panels for ASGLA.  I don't think they will be installed very near each other in the quilt since they are so different.

Carl is in the midst of the clean-up phase in the photo below: 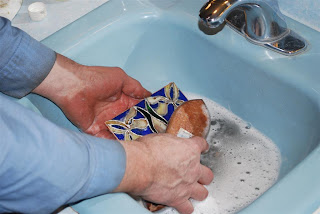 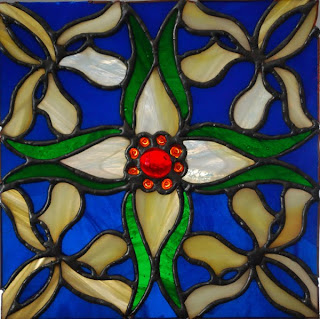 My panel is next: 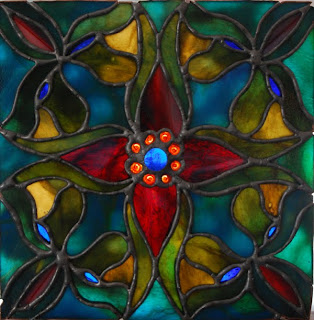 Now all we have to do is get them to the post office and mailed off to Washington state for the calendar.  Simply by submitting these panels, we will be receiving two copies of the 2011 ASGLA calendar.  We have only submitted two lamps so far to the Association and have been lucky enough to have them both selected; but I don't imagine we will always be so fortunate since there are so many, many talented artists in the membership.  It was an honor to be included in the calendar twice.

Last year, we made our first panel for the quilt, using the Parrot Window design.  Here it is below: 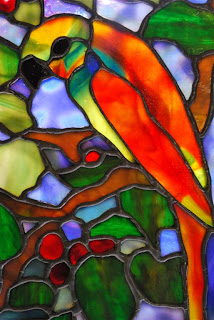 As we went along in the process of making windows, we were introduced to a fellow gardener and glass artisan, Larry.  Larry lives near Oshkosh and has created masterpieces of stained glass over the years.  He specializes in Tiffany Reproduction shades and the sheer volume and the fantastic quality of his work is astounding.  Many homes across the country are graced with Larry's creations.

Larry and his wife, Sarah, hosted a garden walk at their beautiful home (which in itself is a work of art, being a remodeled cheese factory)  and we were treated to an inspirational tour of their stained glass lamp collection.  This was the starting point for trying to make our own lamps.  Larry is very helpful with tips and suggestions and is an excellent mentor.  We're so lucky to have them as friends.

Through Larry, we then met Bonnie and her husband, Mike who live near Milwaukee in another beautifully restored schoolhouse filled with antique furniture they have lovingly refurbished.  Bonnie has an absolutely stunning collection of her own Tiffany reproductions and also her own original designs (her Lily Lamp is so beautiful!)   In fact, the Poinsettia shade pattern we are using right now came from Bonnie's talented hands.  We are indebted to her for lending us the pattern to work from.  I only hope our shade turns out half as well as Bonnie's did.

Here is a photo of Bonnie's stunning Poinsettia Shade. 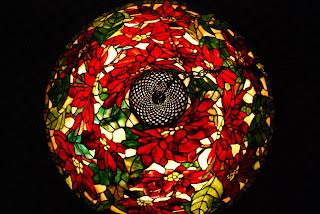 Last night Joel, Carl and I worked on the squares for the ASGLA quilt.  Carl worked overtime, so he headed up to bed by 10PM, Joel worked on cutting glass rods for the centers of the flowers for me and I tried to foil the little buggers.  Now that I have them all foiled, I'm not certain if this is the color scheme I want or not.  I'm thinking about adding a blue jewel to the center, have to see if I can grind one down to fit. 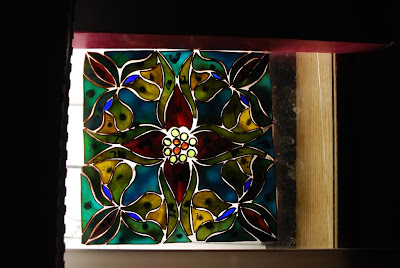 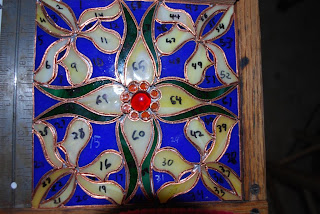 The blue quilt square above is Carl's.  He is ready to solder tonight.


After Joel was done with the quilt square cutting, he moved on to cutting the Uroboros green mottle glass for the poinsettia leaves.  I did a little bit of grinding last night and started placing the pieces on the glass easel (a pair of old storm windows from my late friend Glendeen). 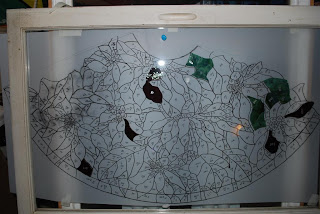 The rest of the day will be spent grinding, as there is a lot of glass already cut out for the poinsettia. 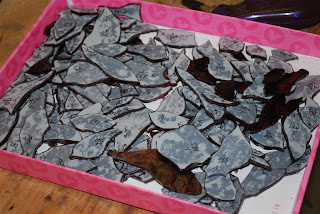 Right now, we are working on two quilt panels for the Association of Stained Glass Lamp Artists, hereafter known by the acronym ASGLA.  Every year, members of the Association are given the opportunity to create and donate a 6" x 6" window panel (the pattern is decided on and sent to the membership in the newsletter).  All of the panels sent in to ASGLA are then assembled into a stained glass 'quilt' and are displayed at various institutions, such as hospitals, nursing homes, etc.  We have to have our entries in by February 1st, and we're on track to make that date.  First off, is the pattern, shown below.  I shaded my copy to make it easier to decide on colors.  This pattern is based on a Lunette window made by Louis Comfort Tiffany. 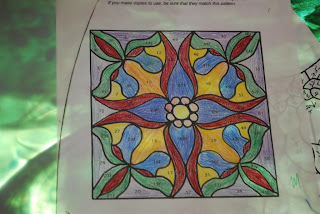 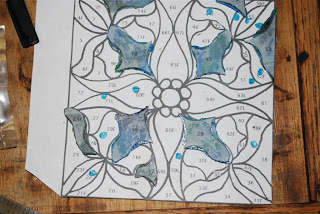 Then we begin cutting glass for the window, as seen above.  We use a homemade light table to aid in color selection, without it, the job would be nearly impossible to get good results.  As you can see, I didn't use the same color palette as shown on the pattern.  This is my panel, I haven't take a picture of Carl's yet, but will tomorrow.  His is done in blue, yellow and green.  We still have to decide on the centers of the flowers, which call for jewels or whatever our imagination comes up with.  I have to cut and grind a few more pieces as we had some breakage issues and then copper foil them in preparation for soldering. 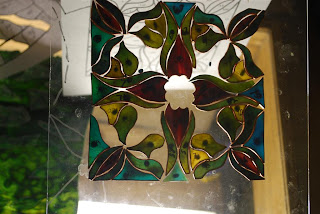 More to come on this!
Posted by Karen at 1:31 AM No comments:

Hot on the heels of the Blue Window completion, we began the Three Tulips panel next.  This also entailed trips to stained glass stores to find the right glass for the job.  There are always so many variables when it comes to color selection and in hindsight, I probably would have gone with something different again, but it's a learning process.  We used the glass bandsaw for this project which was also the first time we broke an expensive blade.  Expensive learning process.

The flowers are Uroboros glass (beautiful stuff!) and the leaves are Spectrum.  The background was also Spectrum Baroque, a very interesting glass to use for the movement contained in each sheet.  The stems and borders were Kokomo and Wissmach. 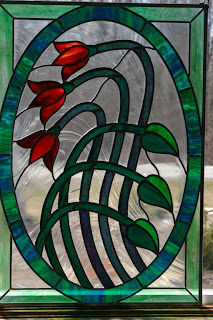 So, after seeing our first lamps at House on the Rock, which, by the way, were listed as being "far superior to original Tiffany lamps" (more about that later), we decided to try our hand at stained glass.  We never gave a thought to making shades; we merely wanted to try to make a window. 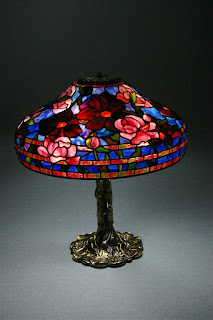 Here is a picture of the very first Tiffany Lamp we ever tried to reproduce, the 18" Peony.
Posted by Karen at 11:41 AM No comments: