Winter came early here this year.  We had our first measurable snowfall the week before Thanksgiving.  I had gone out to get the mail and when I saw the rain had changed over to snow, out came the camera.  I realize this looks more like a snowball fight than a snowstorm.

We've had years we could work on rock and garden projects into the first week in December, so this storm really did catch us with our snowpants down.  We still had some daffodils to get in the ground and with a little luck, they'll come up even though they were planted haphazardly.


We had some bitterly cold temperatures in November, well below zero some nights.  Now that we're into the first week of December, it's been warming up some.

Waking up the next morning was magical, there's nothing like snow to transform the ordinary. 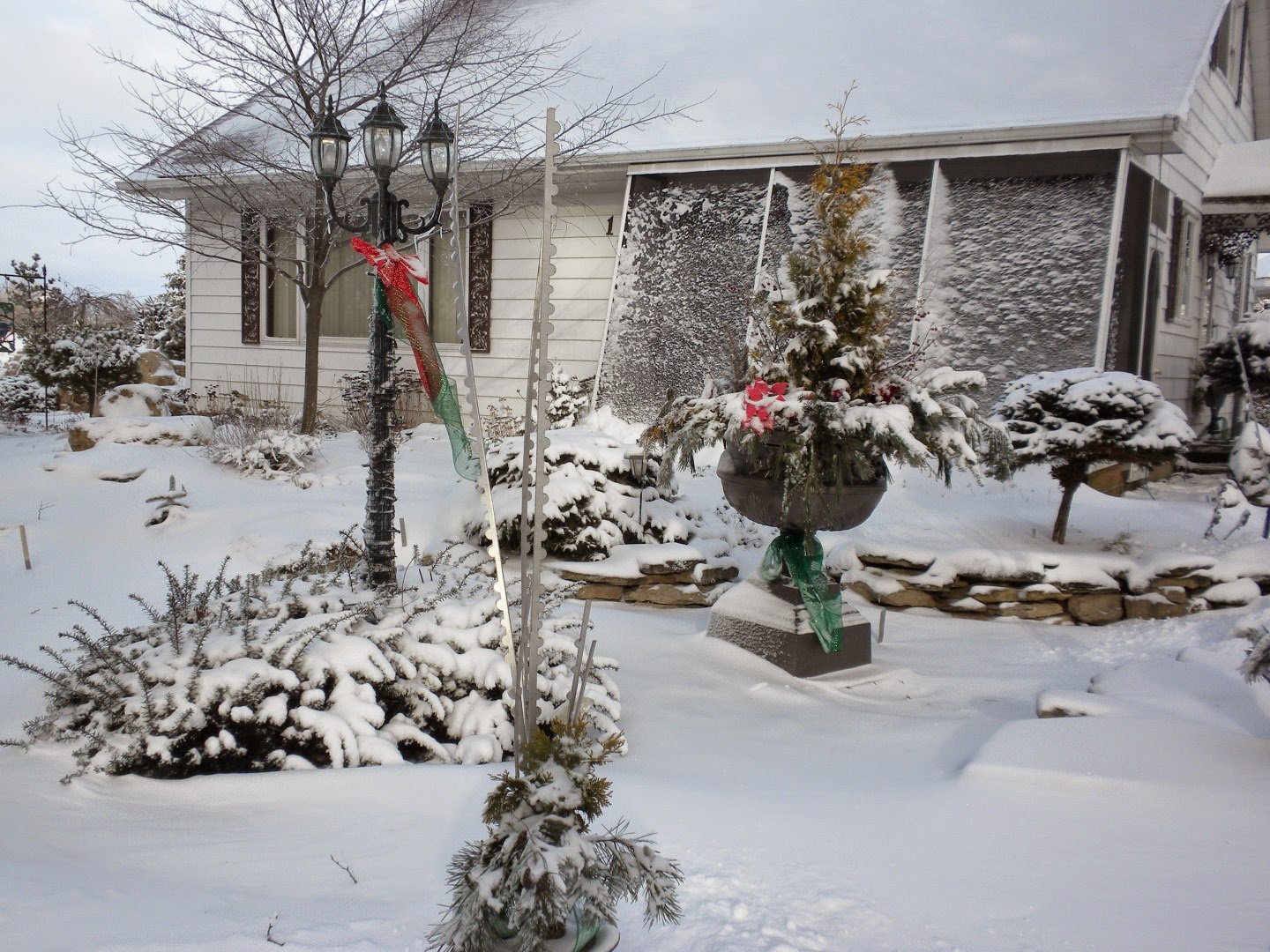 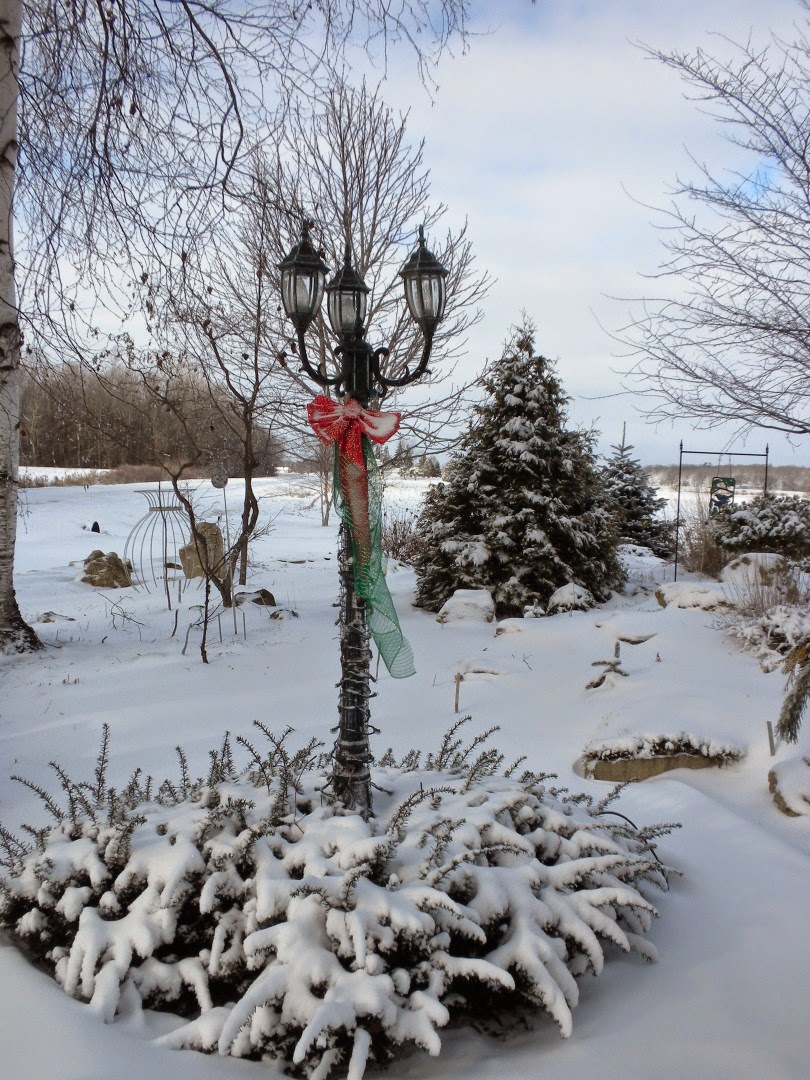 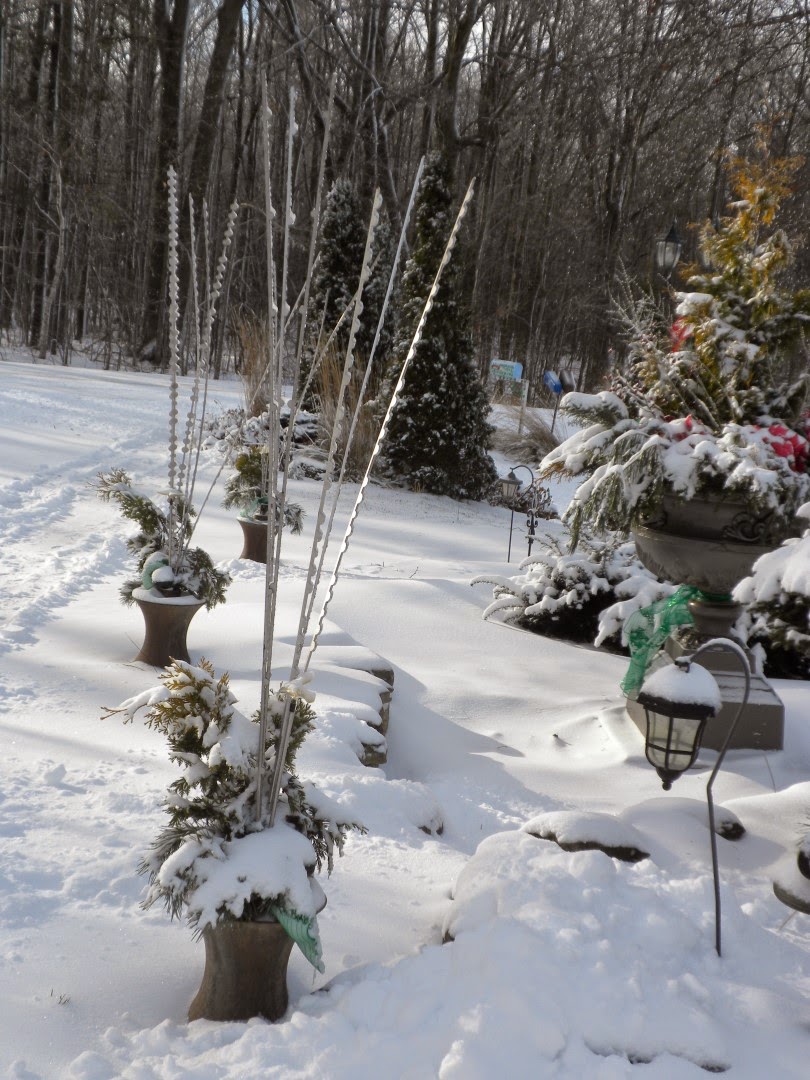 Enough of the driveway, let's wander into the back yard and see what Mother Nature did there.

So since it's officially the end of the gardening season and all this white stuff fell, of course, it is now skiing season.  (I know, it should be house-cleaning/Christmas shopping/baking/gift-wrapping/stained glass season. I know.)  But we never know how long we'll have snow, right? (Ok, we'll probably have snow until April, but remember last year I bought new skis to replace the ones I wore out?)  I decree it Cross-Country Ski Season. 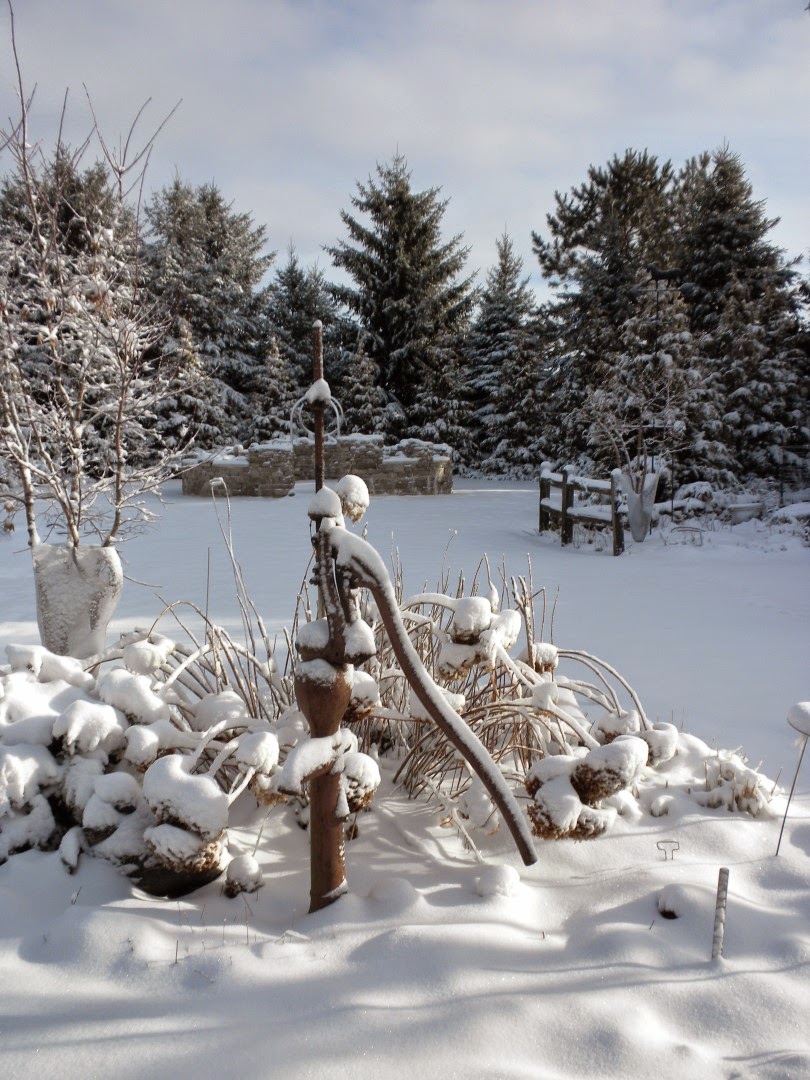 I can't stay cooped up in the house when there's snow to be used.  That's a crime.

So anyway, the weather has turned a bit warmer again and my ski trails were getting a bit thin in places around the Back Eight.  I skied right through Gun Deer Hunting Season, too, but only after dark when all the guns were supposedly home and tucked in their cases.  Although last Saturday, Joel and I took a chance, donned blaze orange, and skied one of the Rails to Trails hiking trails.  We were lucky, no one took a shot at us.

Today Carl and I were at loose ends.  This weekend I worked on some Christmas decorating which meant we ended up with two horses in the dining room.  Metal horses, that is, the ones below in the picture.  It never fails that every year the light sets on the horses malfunction and then Carl and I go round and round with him insisting he can fix them and me railing against spending hours on repairs when the lights are clearly old and brittle.  Wonder of wonders, I prevailed this year.  We bought new lights.
Picture the two horses above in our dining room while we stripped them of their old lights and reapplied new ones.  Sheesh, such a job.

After church this morning, we were kind of restless.  The snow here is thin, I've gone around the farm so many times I'm sure the neighbors think I'm truly nuts.

I've still been keeping up with my exercise routine,  walking with Leslie Sansone, tossing weights around three times a week, but Sunday's are traditionally my rest day, no Leslie on Sunday. 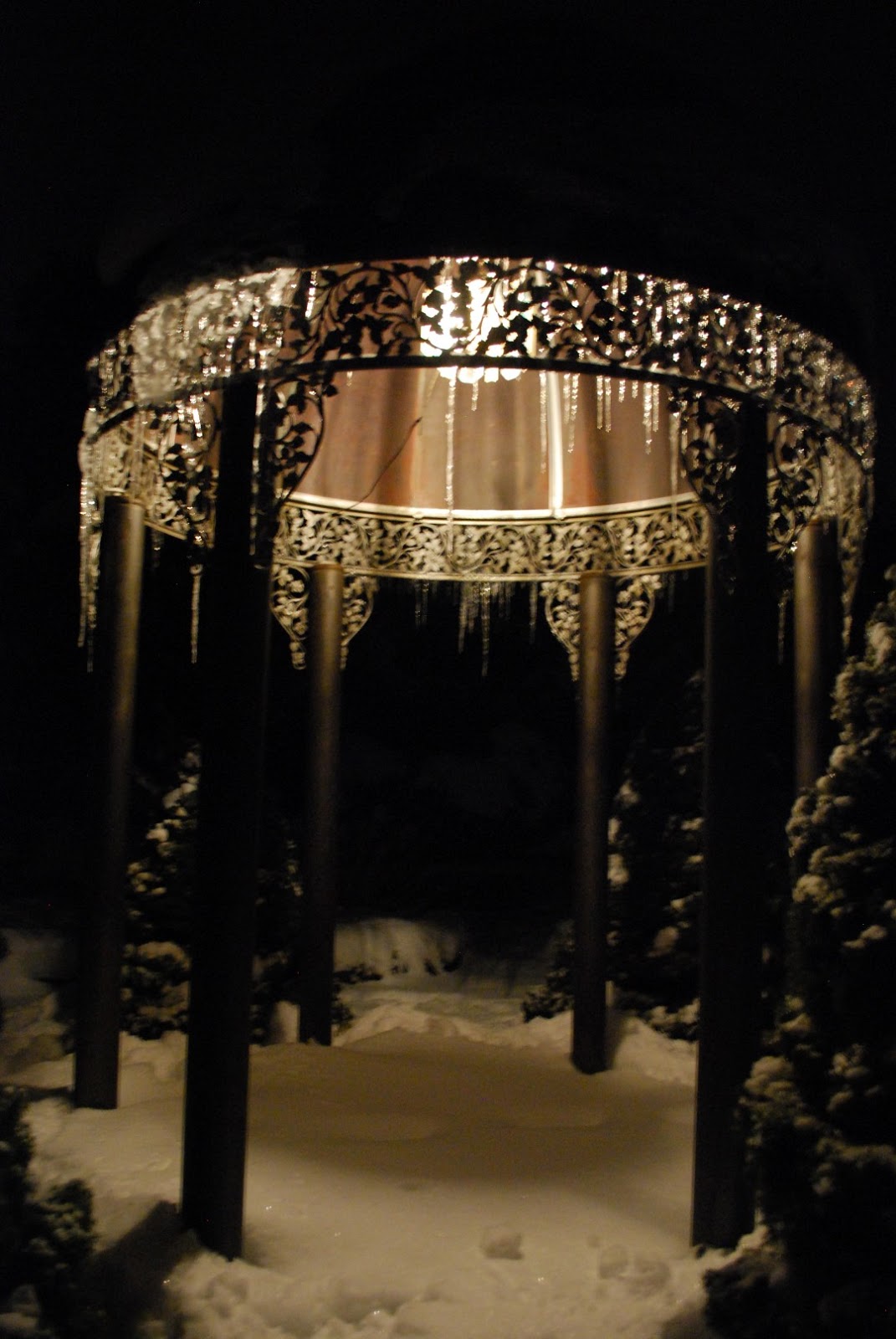 After dinner, Carl wanted to know if I wanted to try a new cross-country ski trail about 40 miles north of home.   I jumped at the chance to leave the Christmas clutter and work behind.  Let's go!

(I didn't take any pictures of the upcoming adventure; the rest of these are of the yard here, lol.)

We left our house a bit late and arrived at the Machickanee Cross Country ski trail-head at 3:15 PM.  Even though it was so late, we chose the 3.9 mile 'intermediate' loop.

We've been skiing for over 30 years, so intermediate didn't sound too scary.  We skied through some gorgeous woods filled with pine, birch and beech trees with their papery winter leaves still clinging to the branches.  After a half mile we came to the branch in the road and a sign indicating the loop we wanted.  As we skied along, we came to a tree with a metal sign nailed up that read: Most Difficult.  At least, that's what I think it read, it was black with jagged white lines across it.  Not quite skull and cross bones, but  I started to feel a little twinge of dread. As we moseyed on a little further, I saw the reason for the sign, the trail suddenly went down.  Far down.....  Oh, my.   I was flabbergasted, oh my goodness, how far down does it go? We're traditionally flat land ski people, downhill is not for either of us. 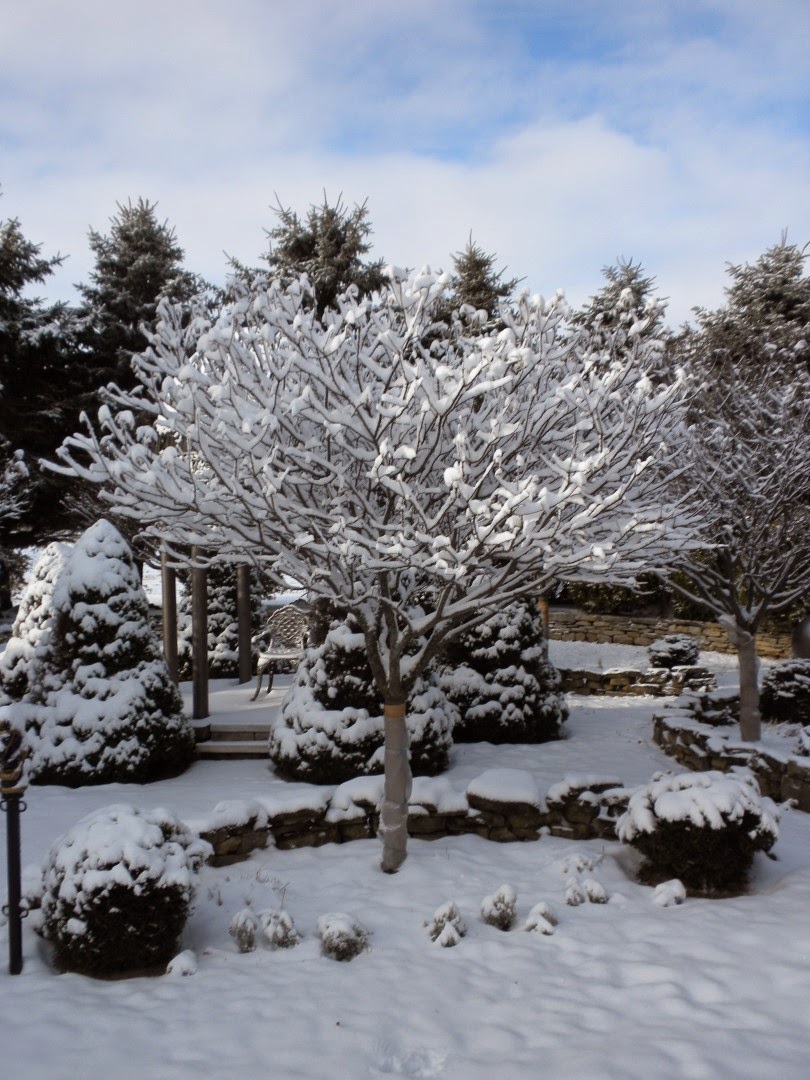 Carl asked me if I wanted to turn around and go back. (In retrospect, YES would have been the right answer.)   We stood there discussing it for awhile and noticed how low the sun was on the horizon.  How bad can it be?  I mean, heck, it's Intermediate.  Can't be THAT bad.  Right?? 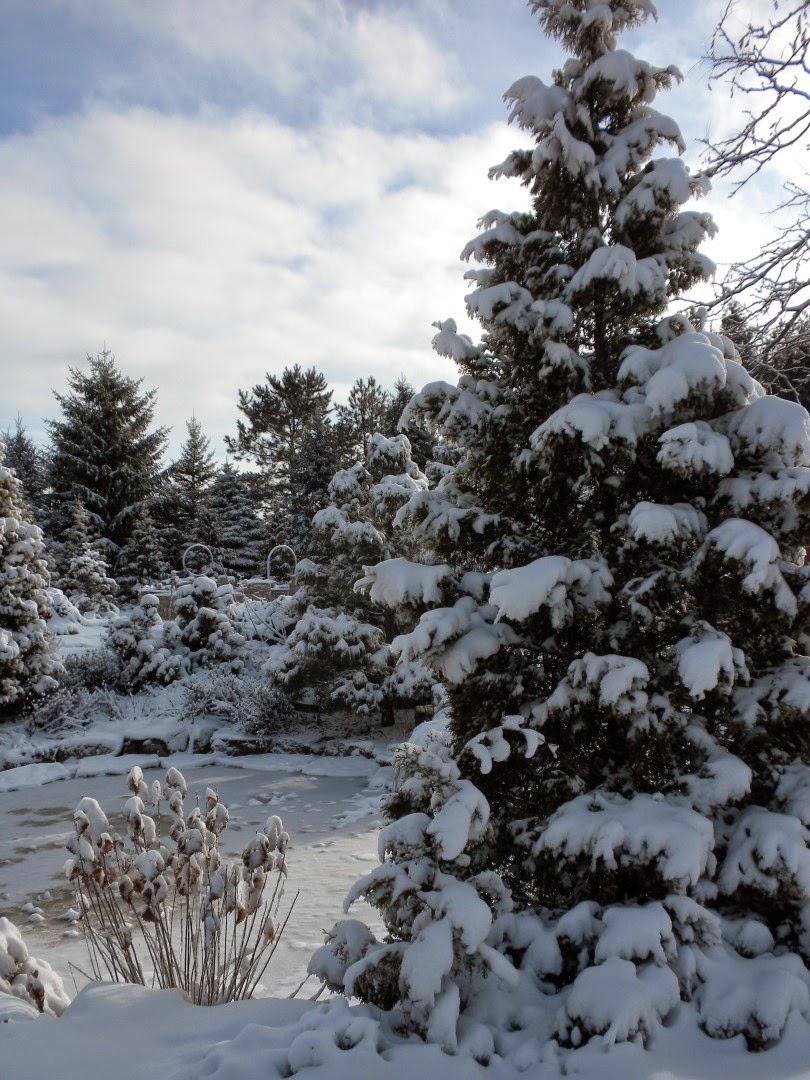 Carl bravely stepped forward.  "Wow, it's slippery," he said as he aimed his skis down the hill.  Down he went, picking up speed at an alarmingly rapid rate.  My heart sank.  He was out of sight in a split second. 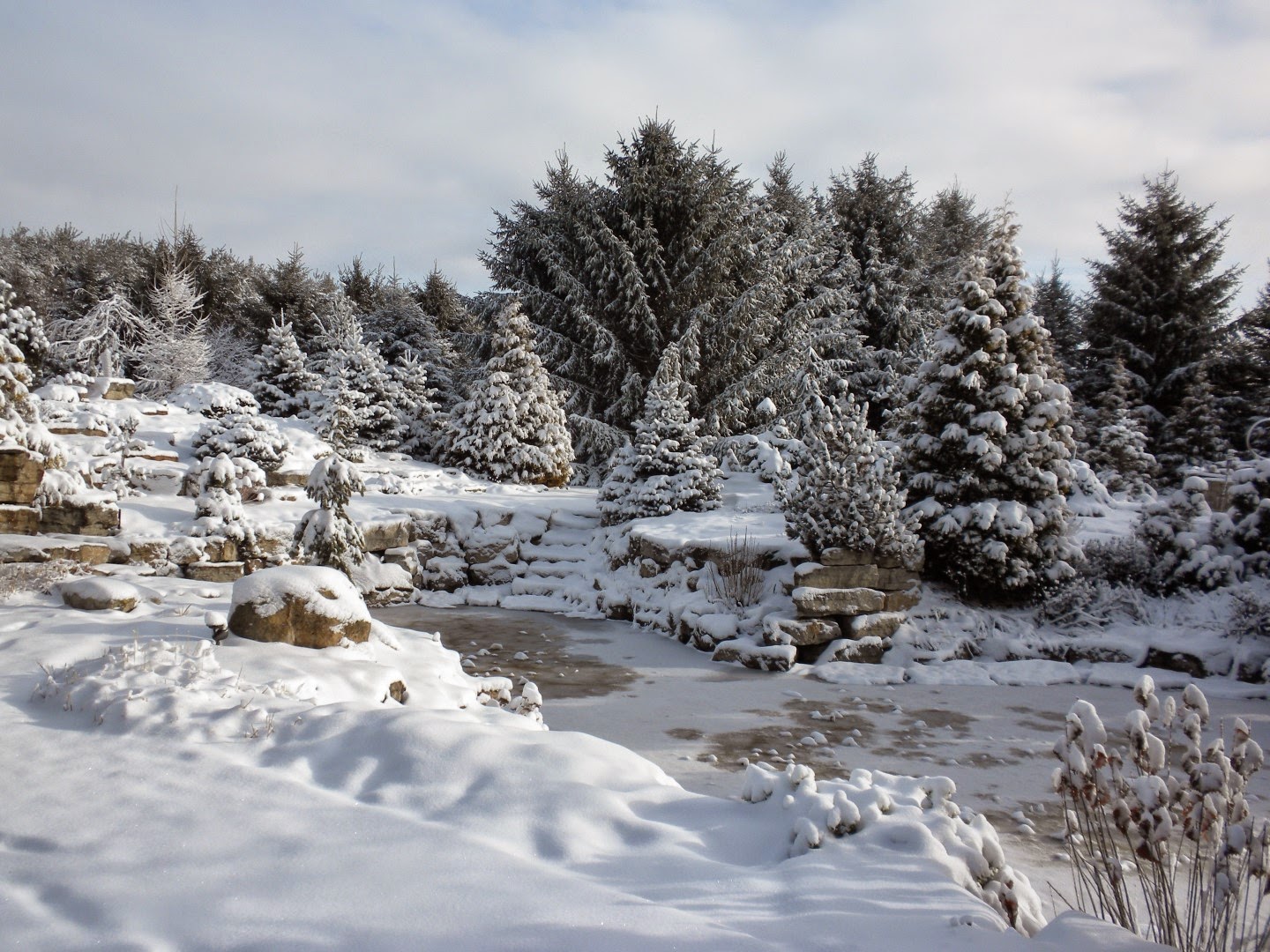 I didn't hear any screams of agony.  Maybe it wasn't as bad as it looked.  I stepped forward cautiously. I can't stand here all day (or night).  Not wanting to look as chicken as I felt, I started out slowly,   planting my poles in front of me trying to brake as much as possible, but it was for naught.

I saw my life pass before my eyes as I came careening down the hill completely out of control.  The further down the hill I went, the steeper it became and the more speed I picked up.  Oh, this will never do! 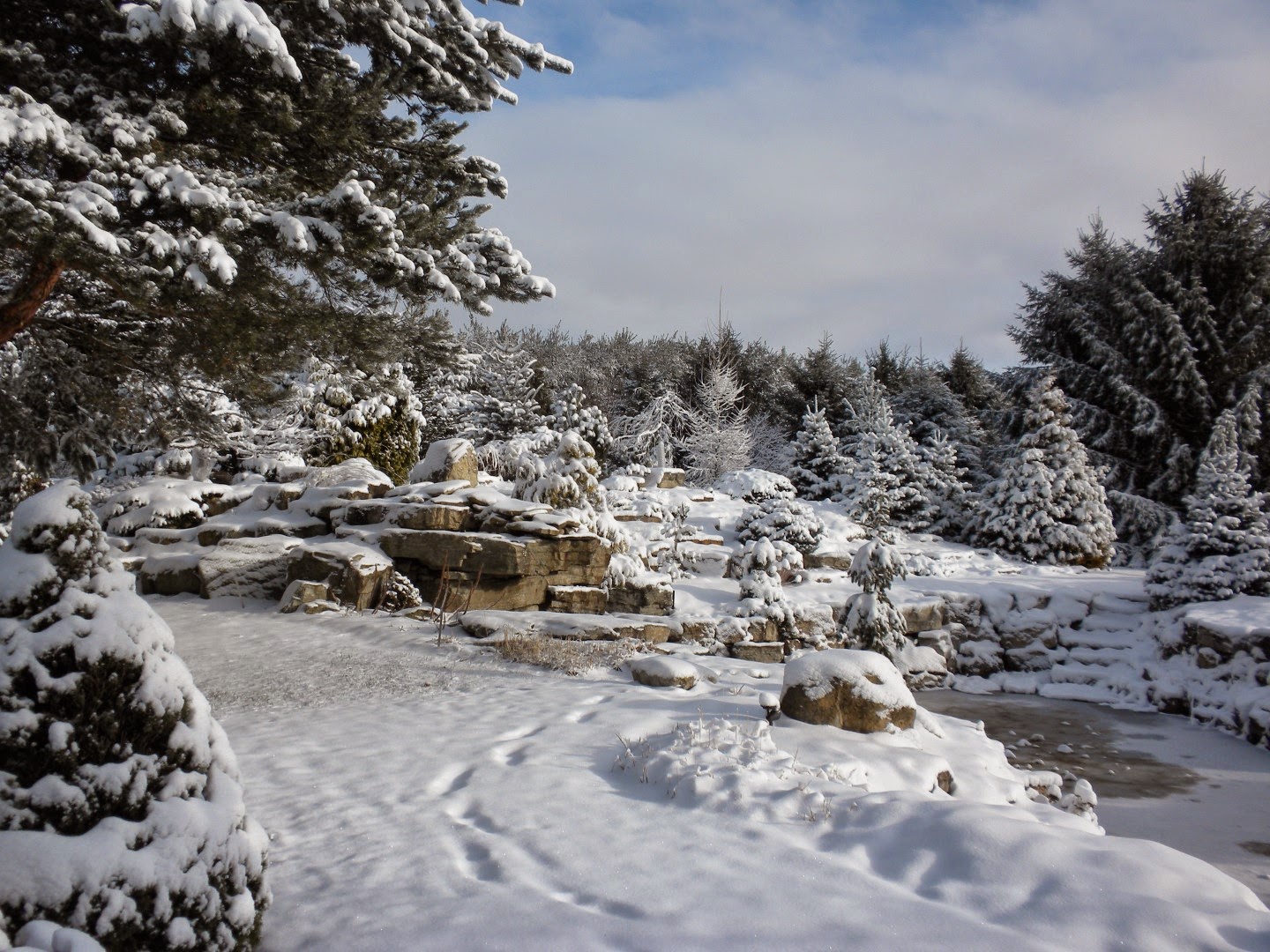 There was a curve coming up and a FOOT BRIDGE with a creek!!!  I'll never make the turn, I'll end up in the creek!!!   That was when I vaguely remembered something from South Park, that naughty animated TV show, and a skiing lesson...'If you pizza when you should have french fried, you're gonna have a bad time."

I was clearly Going To Have a Bad Time.

Inexplicably, I remembered Mom and I driving home from town one Sunday forty years ago when suddenly the brakes on the old Buick went out.  We were trying desperately to stop, it was an AWFUL feeling.  She was pumping the brakes for all she was worth, and then hit the emergency brake only to have the cable snap.  She jammed the car into first gear and we hung on for dear life.  PLEASE JUST STOP! 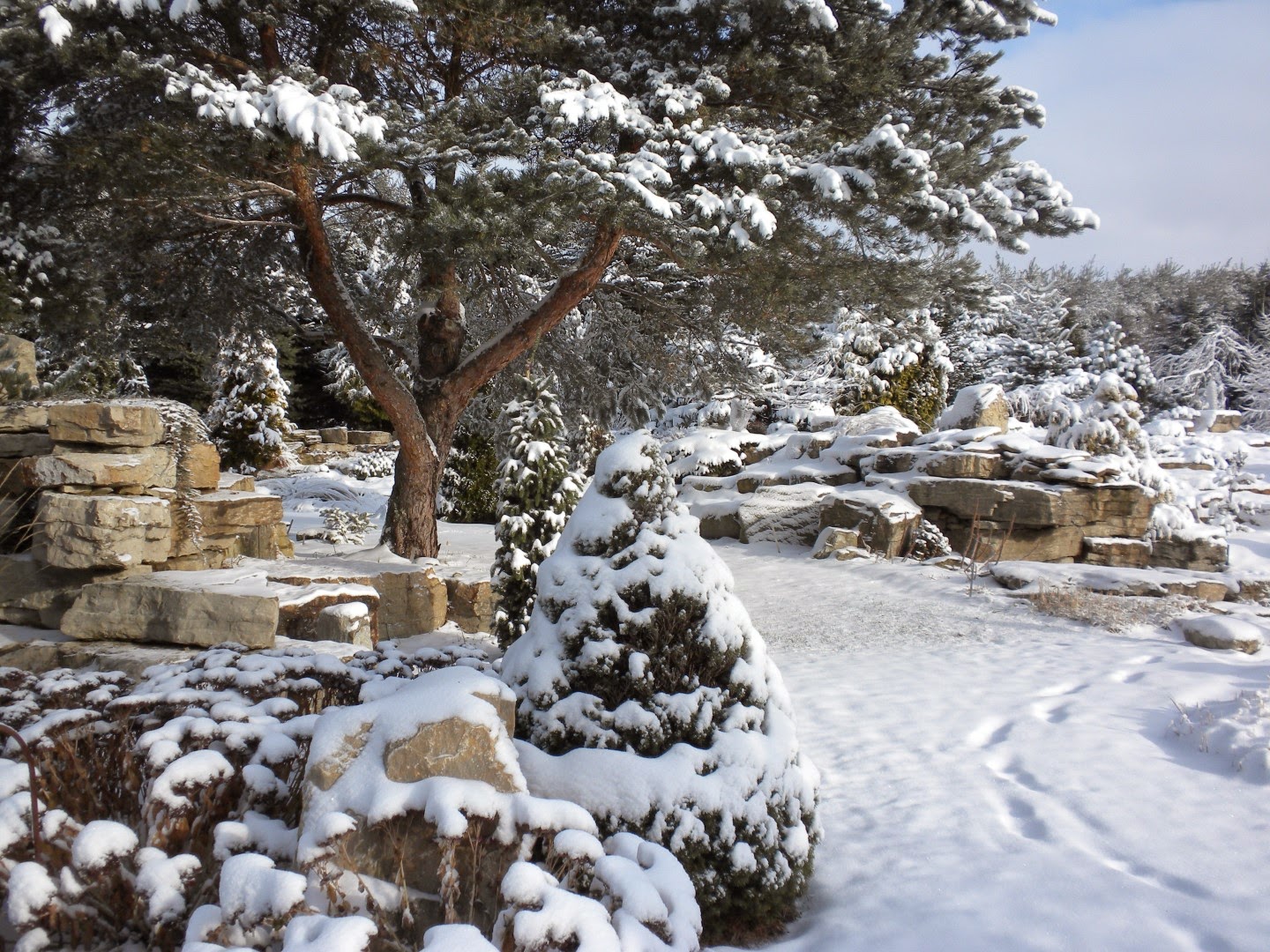 I bailed out, dropped to my right side and flopped around like a rag doll from that point on. Snow was flying everywhere, I didn't know which end was up.   My new jeans left impressive blue-dyed snow skid marks for a good 25' before I came to a stop. One pole was halfway back up the hill and unbelievably the other was still in my hand. I ended up on both of my knees in a praying position with my skis crossed behind me, but I survived. I've never been happier to be still in my life. 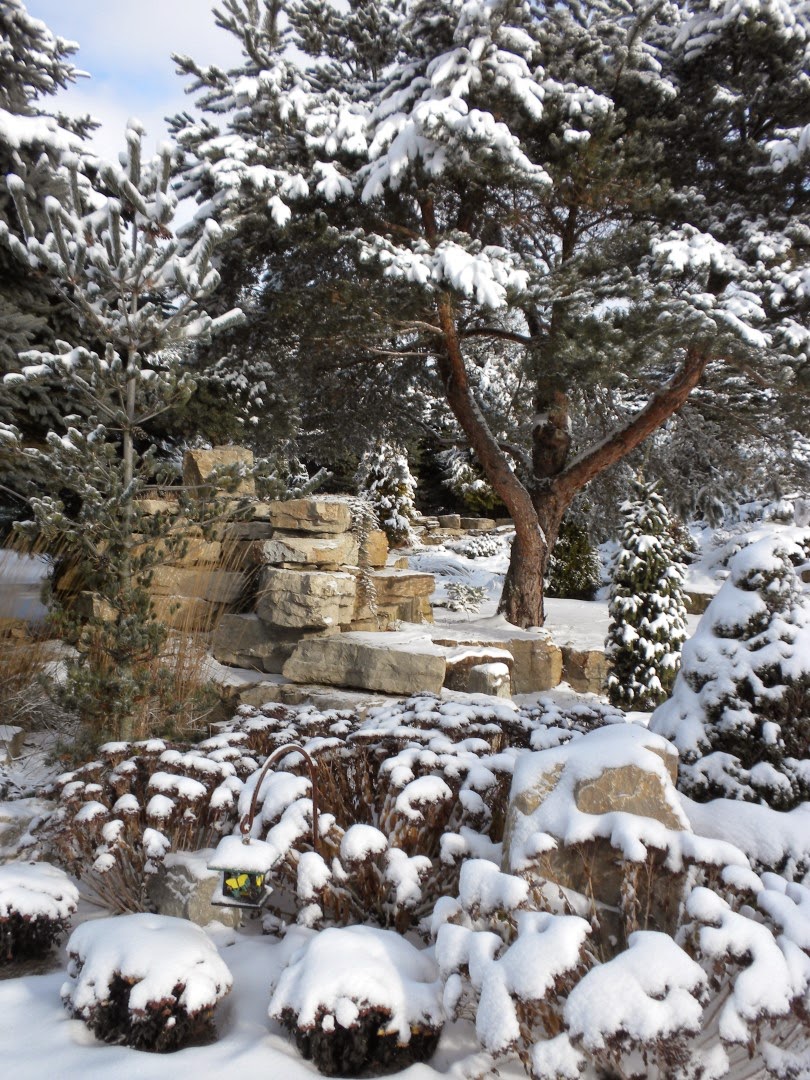 Carl came back up the hill on his skis (I think he was french-frying) to pick up the pieces of his wife.

"Are you alright?! Wow, you really took a fall!" he said.

"Well, it beats going off the bridge into the creek," I said.  "I think, anyway." 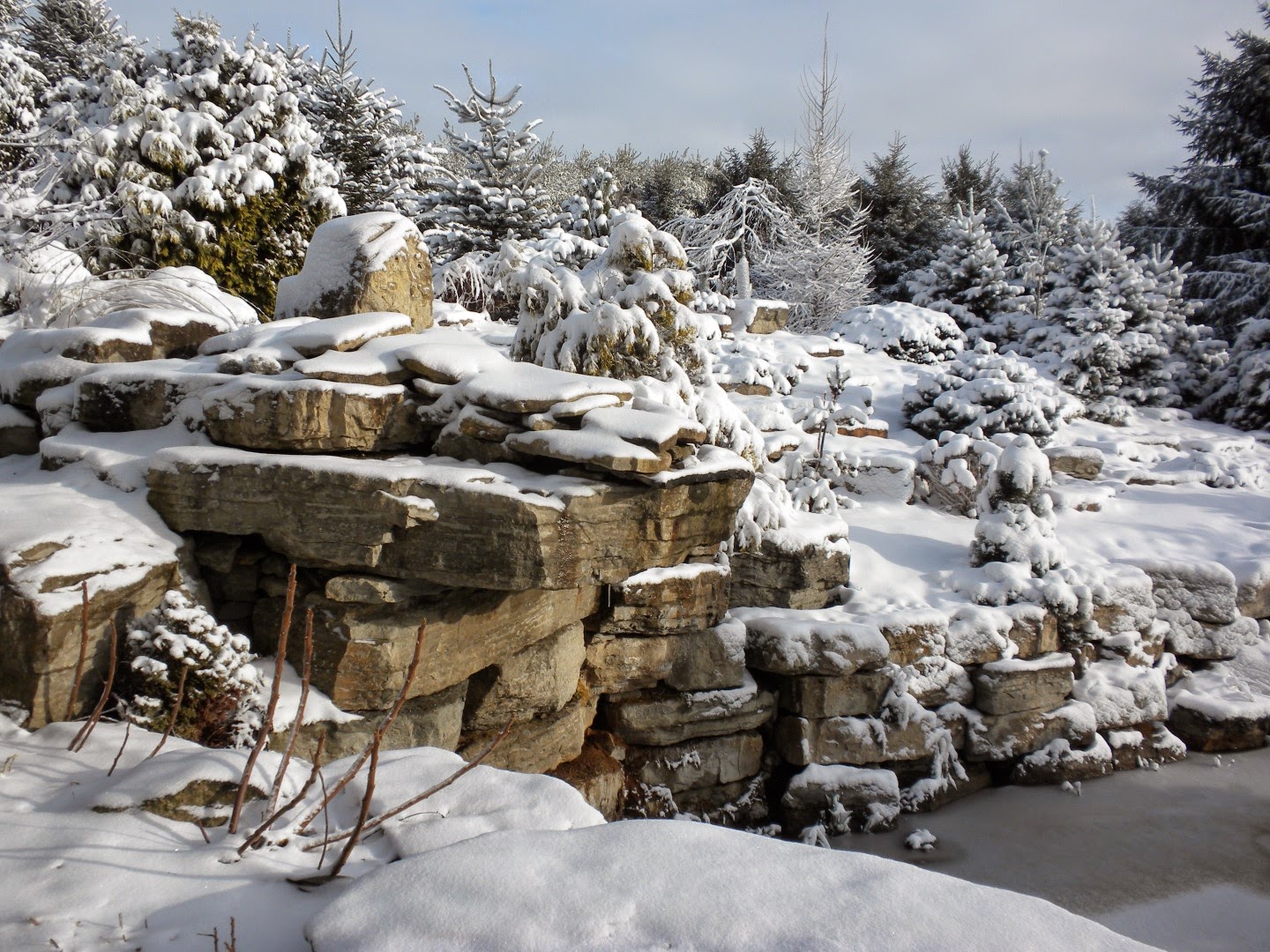 Carl had to help me extricate myself from the tangle of long skis, finally unhooking my boot from the binding so I could get my right leg out of the pretzel position it was in.  Luckily I remembered to stand perpendicular to the hill when I stood up on the other ski, or I would have gone on down the rest of the way on one foot.  I was shaky, my right ankle was complaining a little, but everything was good.  I reapplied the other ski and continued on across the bridge. 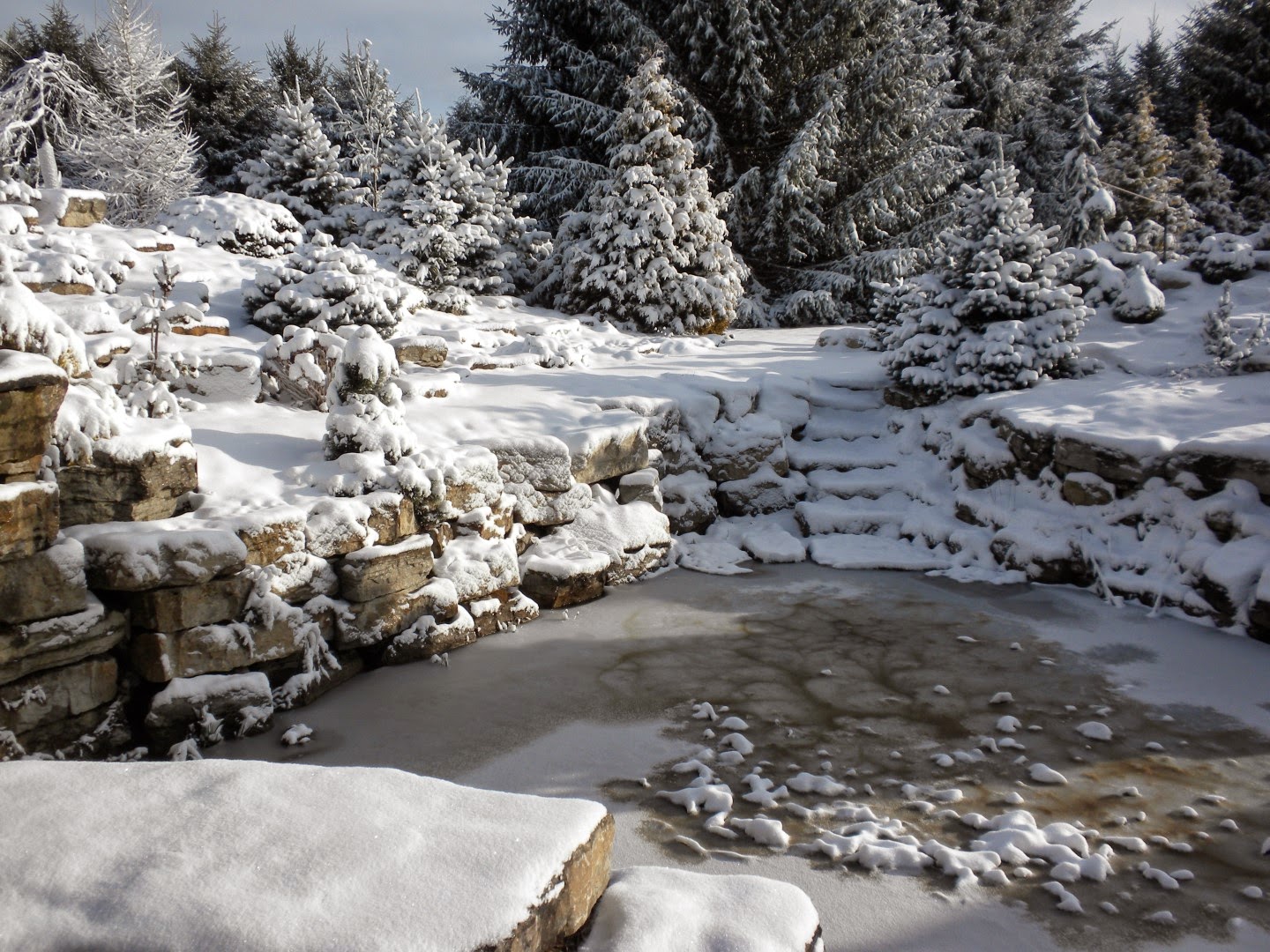 Of course, when you go down, you have to go back up, so we mushed our way up the hill on the opposite side of the creek with some trepidation and a lot of sweating and panting.  This was hard work and we were worried, dusk was falling and how many more of these hills were there? 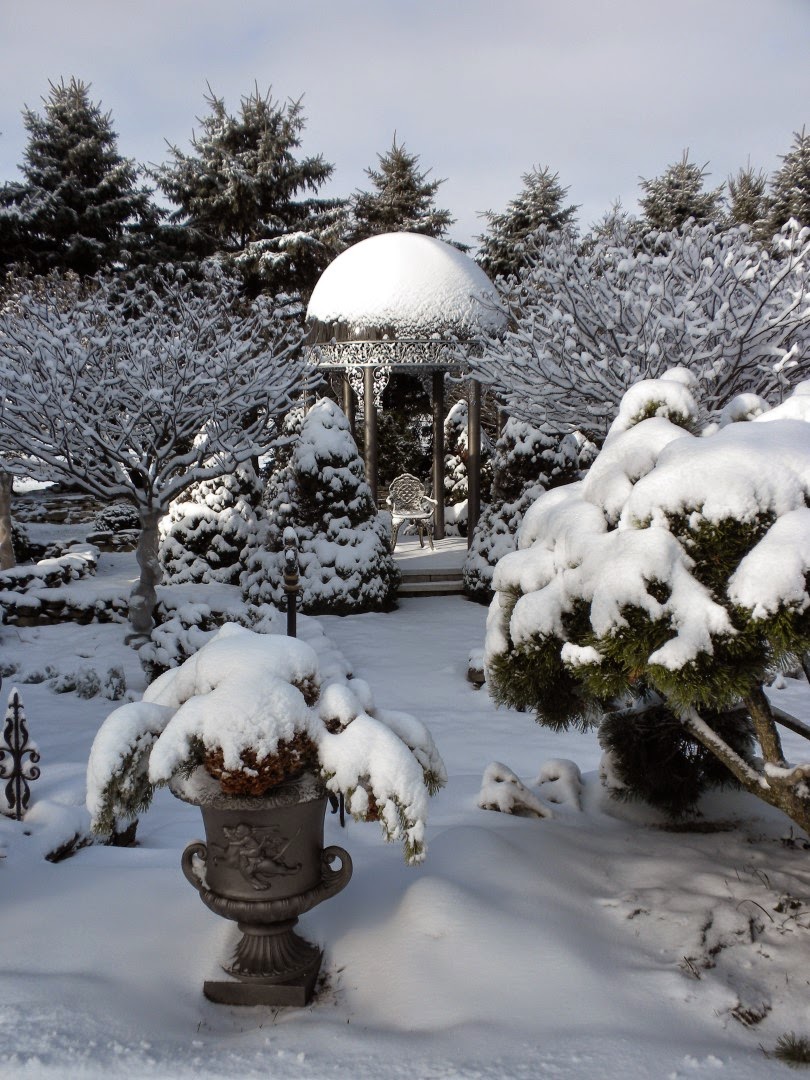 In less than a quarter mile there was another downhill run.  I hesitated, but the ol' 'when you fall off the horse, you have to get right back on' adage was stuck in my head, so we went for it.  Carl was behind me and we tried our best to slow down, but the trail was icier here.  Halfway down, Carl yelled, "OHHHHH L O O O O O K  O O O O O U U U TTTT!!" as he flew on by.

My skis were a little slower than his, and he had no choice but to pass on my right.  I had no time to watch his theatrics, it was all I could do to stay on my skis as trees flew by at breakneck speeds.  Finally, mercifully, the trail leveled off again and we both stood there panting.  I saw the imprints in the snow of other not-so-lucky ski victims earlier in the day, we weren't the only ones 'having fun'. 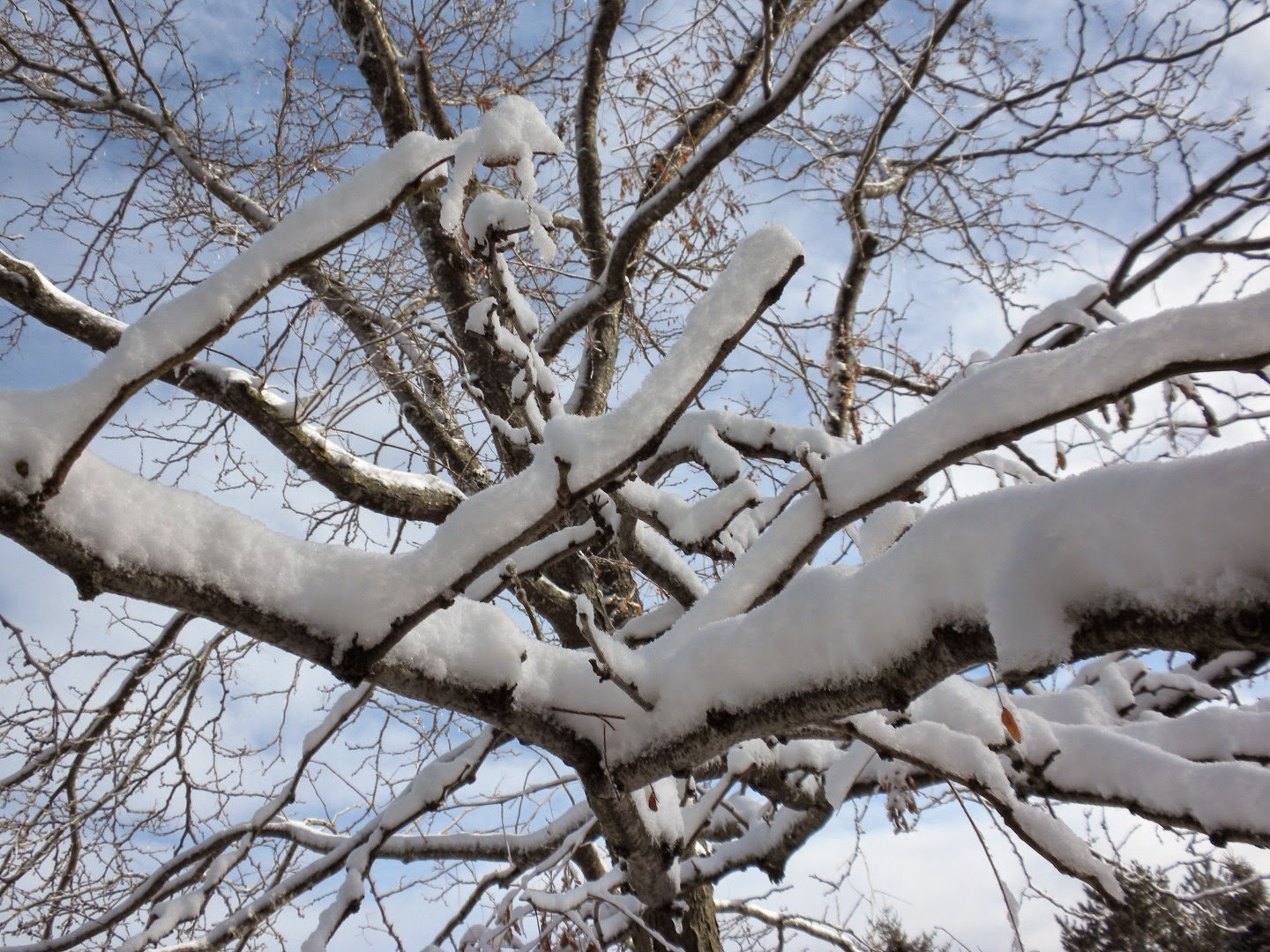 We plodded on until we came to another black sign proclaiming yet the next 'Most Dangerous Hill'.  Another one?? Yeah, right.  No way.  Off came my skis.  Fine, I'm walking. 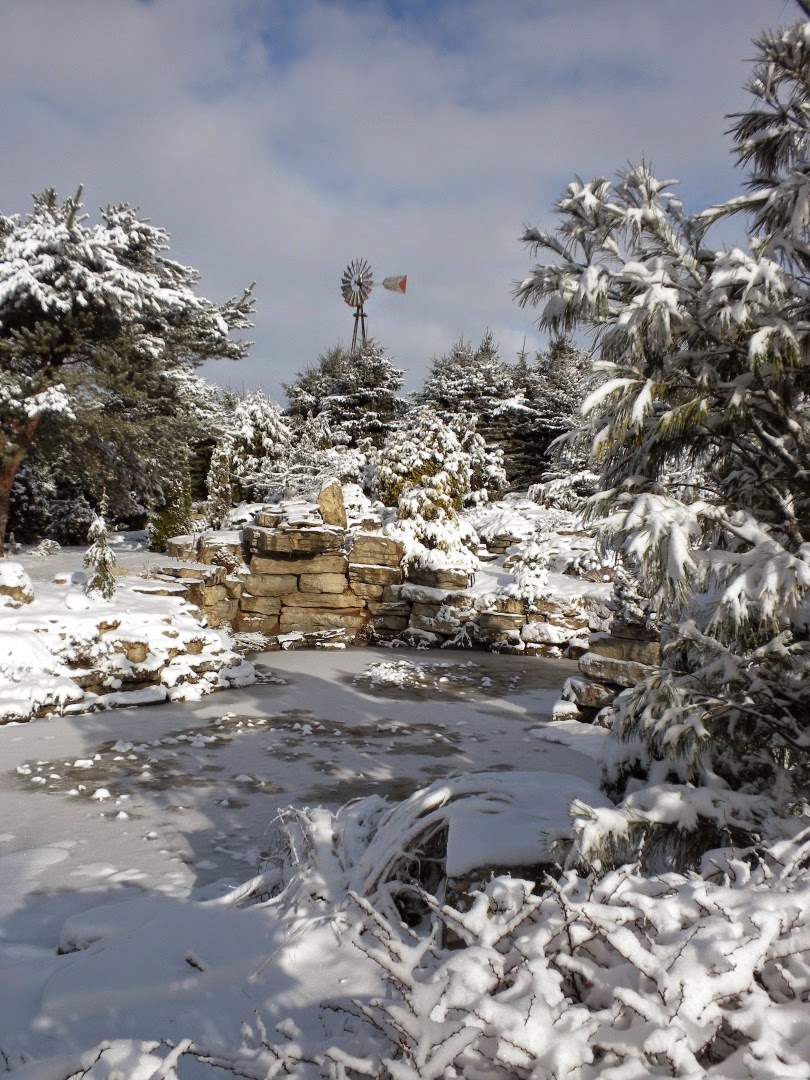 Carl agreed, too.  Twice was enough, can't tempt Fate one more time, we're both 56 years old, we don't bend like we used to.

For the heck of it, I set my right ski down on the ground to see what would happen.  Without even giving it a push, the ski leaped to life, careening down the hill all on it's own, following the tracks of earlier skiers.  I shuddered to think how much faster it would have gone with me in the binding.  I was perfectly happy walking, thank you very much.  And at the bottom of this hill was another foot bridge.  I would have never made that turn. 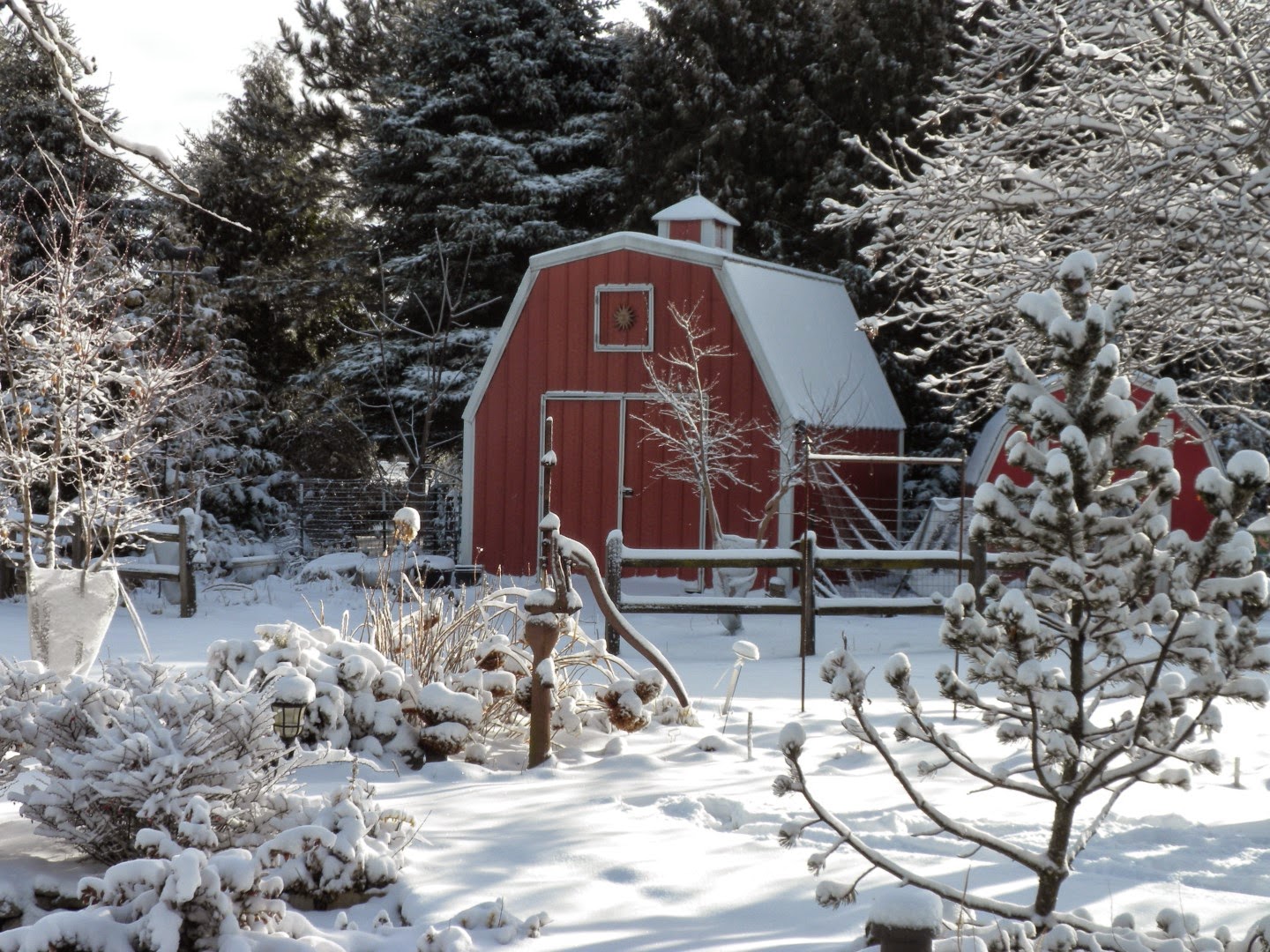 By the time we walked up and down a few more hills, we could finally put the skis back on and make some headway toward the parking lot.  It was now almost 5PM and darkness had fallen.  We were both very tired and sweaty.  My light winter jacket was soggy and my wet hair was actually starting to stiffen in the cold air. 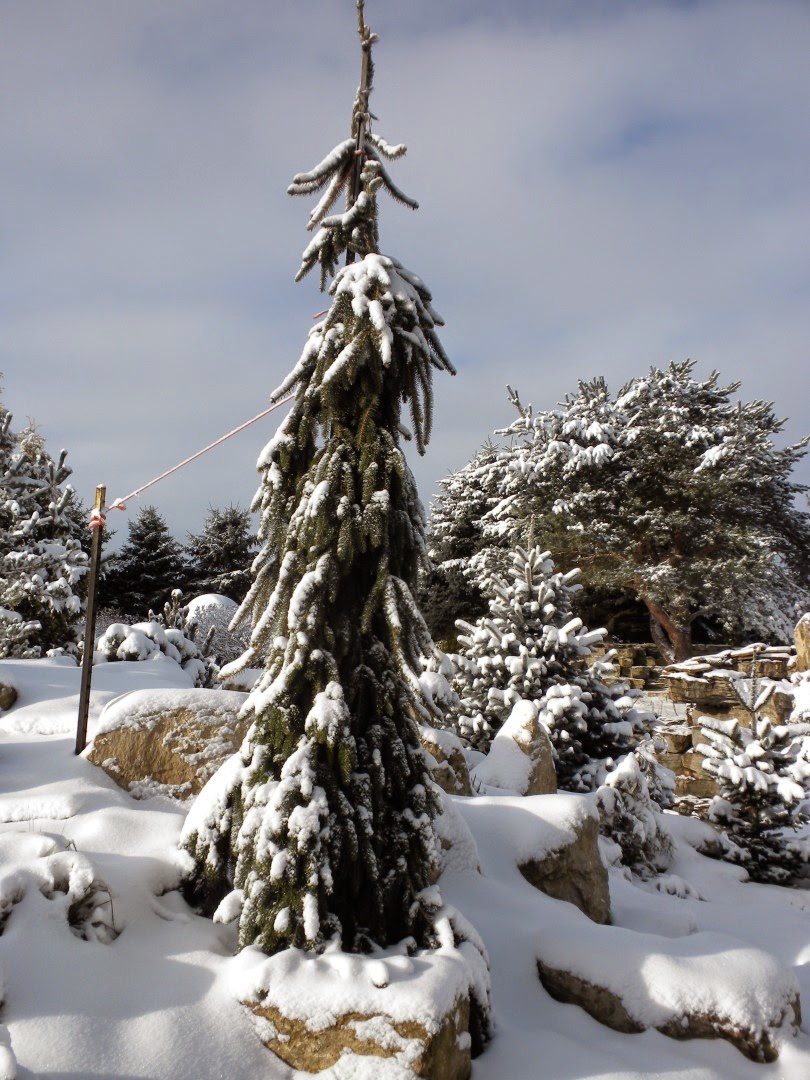 We flopped into the car and sat there for awhile, guzzling water.  Ah, it felt good to sit down!  I think this was the hardest 3.9 miles of skiing we've ever done.  We were sitting there looking at the map in the dome light when Carl said, "It looks like the other loop is an intermediate one too.  There is a beginner's trail, though.  We passed it by the gate." 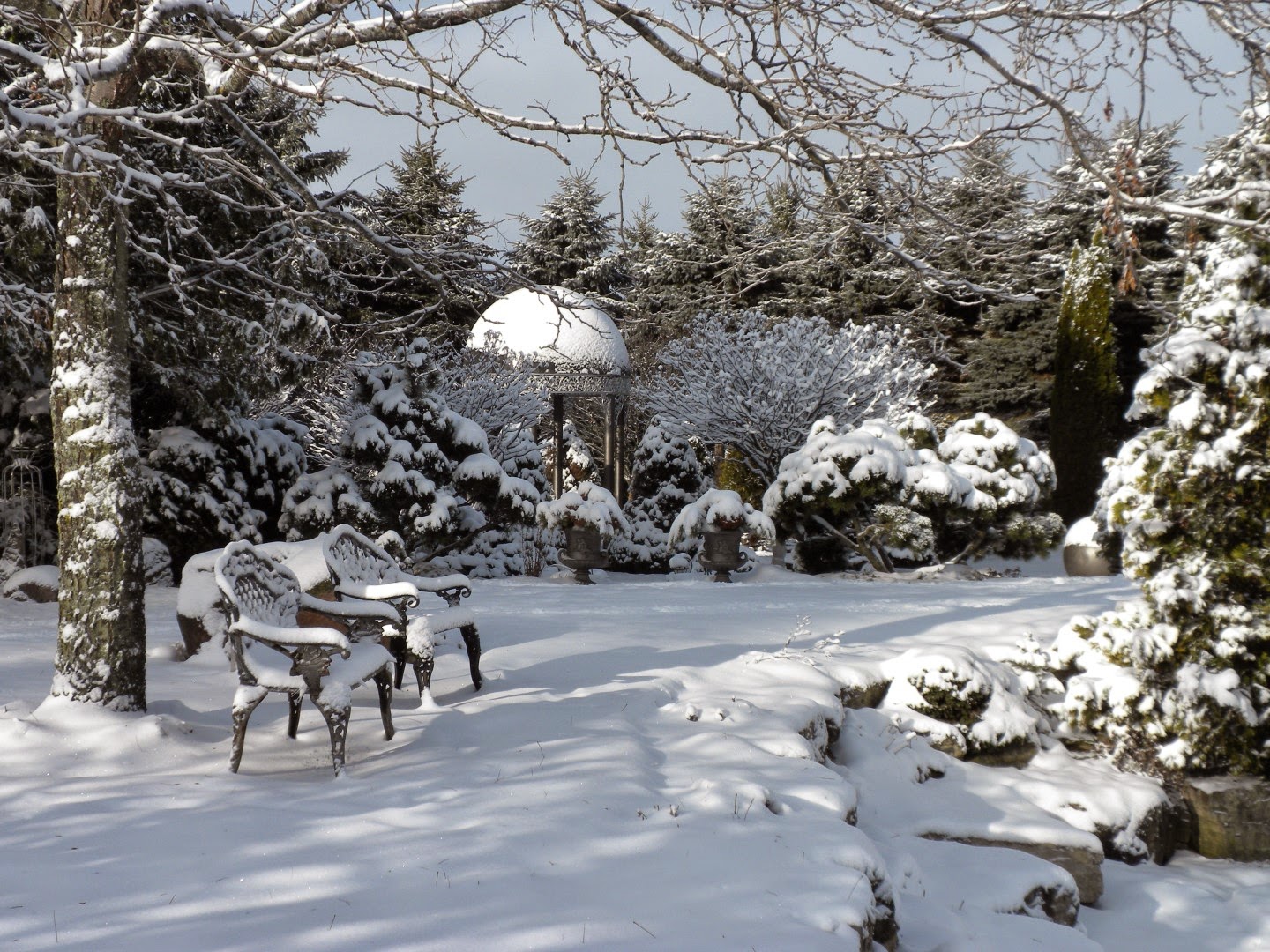 We pulled out onto the side road and drove slowly as it curved sharply.  Suddenly we came to a 'Hill' sign.  I tensed up immediately until I remembered Carl had just changed my brakes last Thursday.
Oh, we can stop if we have to, yes, yes we can. 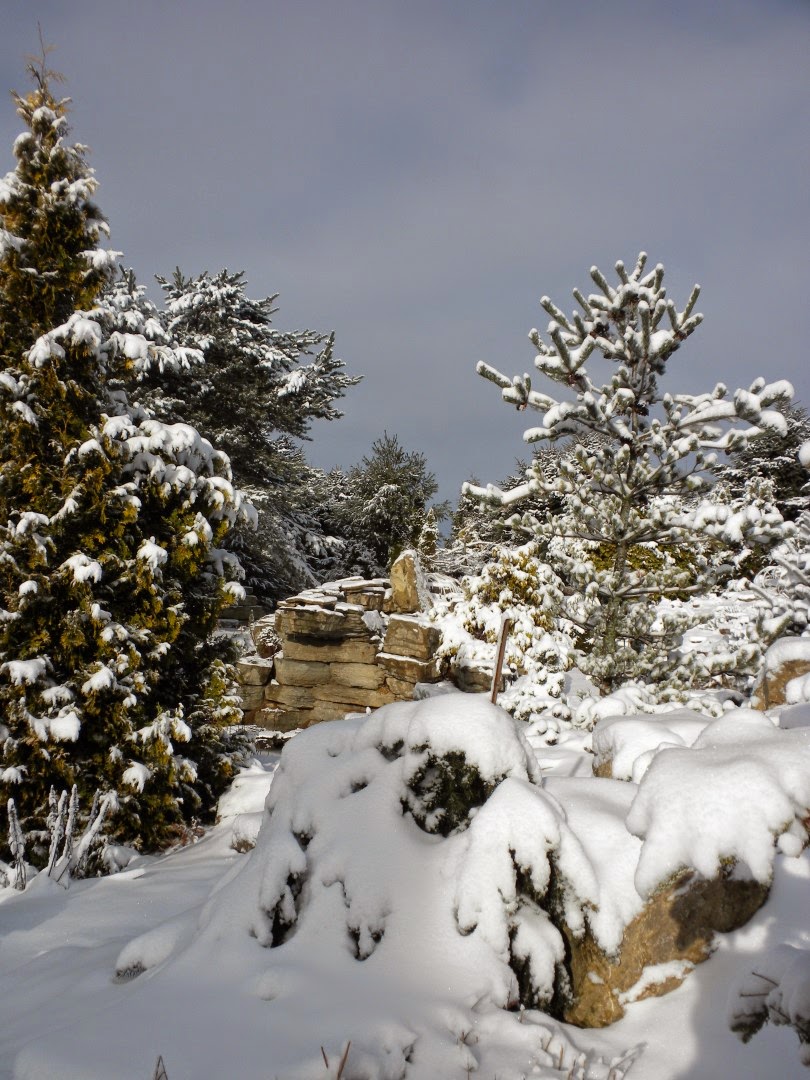 No Pizza or French-Frying Necessary.  Just push down on the little pedal. 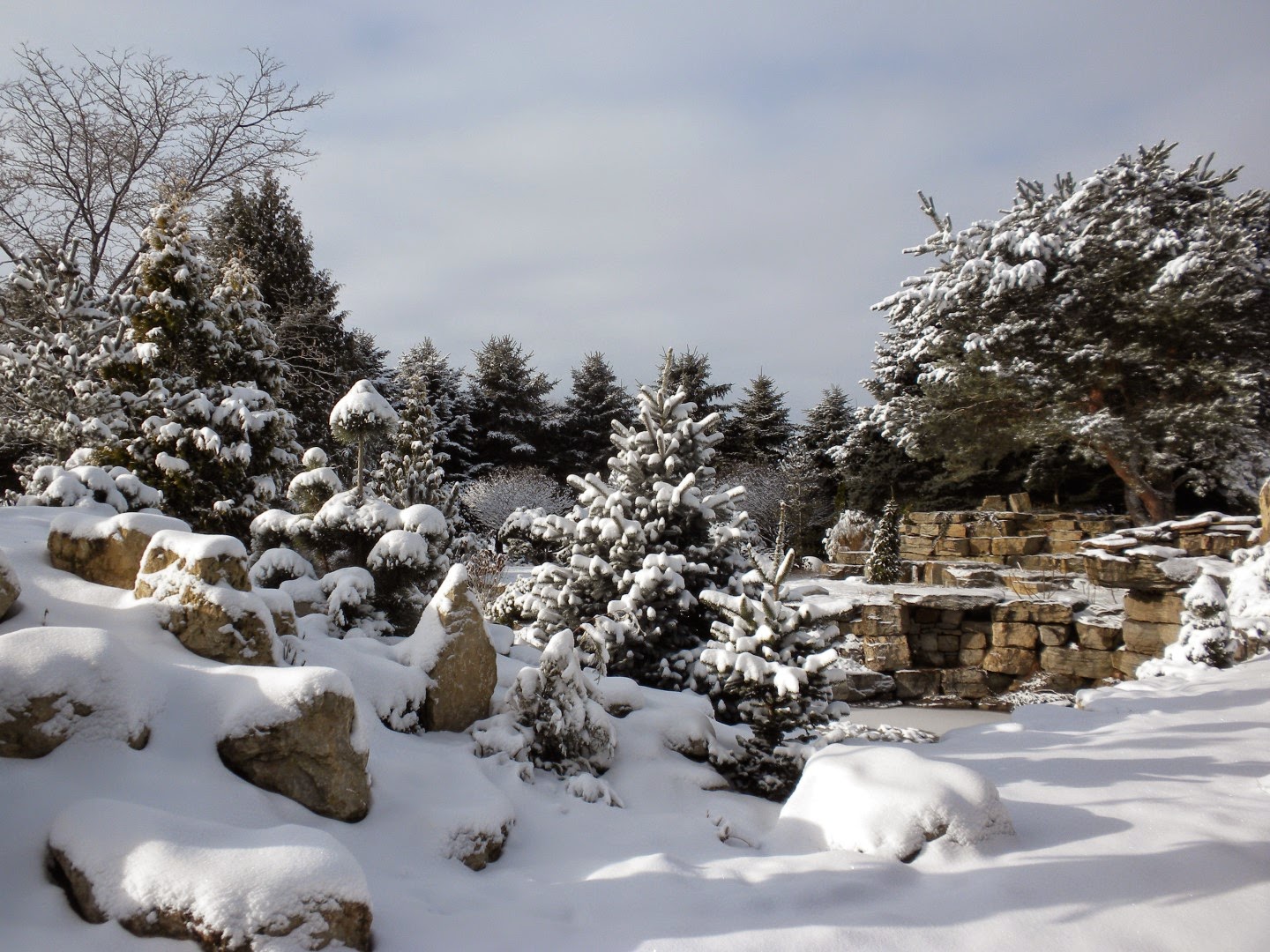 Brakes are a Wonderful Thing.
I wish someone would invent them for cross-country skis.