Our October weather was glorious and so far November has been as well, up until last night.  A cold front blew through and our temperature has dropped from the upper 60's to the 40's.   Oh, well, we all knew it had to come to an end sometime.  I've been working on clearing out all the dead vegetation and tying up the loose ends.   Since it's raining at the moment, I'm going to tie up some loose ends about what went on around here this summer.

Every year we try to build something new to keep things interesting.  Lately we've been focusing much more on structures than garden additions because, truth be told, there's far too much garden here as it is.  By the time I'm done weeding this place, it's time to start over at the beginning again.

Carl keeps telling people we're going to downsize by fifty percent though even he has a hard time figuring out which bed to eliminate.  Downsizing isn't all that easy either; where do you go with all the plants you want to save?  We do have some plans to change the rock formation  on the back side of the Pachyberm, though.  More rock equals less weeds, that's my idea of downsizing.

For most gardeners, spring is the most intense time of year, and for us, that's definitely the case. Starting in April there's my annual seeds to plant and propagation antics, and once it warms up, there are lawns to mow here, at Mom's and the Back Eight.  The first of June is annual planting time for me which takes up at least two weeks.  Once the flowers are in the ground, it's time to weed.  And weed.  Usually by July we have been through the gardens at least twice and the weeds are under control for a few minutes.  That's when our thoughts inevitably turn to junk.

Yes, junk abounds around here, sad to say, almost more than the weeds.  Carl had ideas of what he wanted to create from all the stuff he's collected over the last fifty-something years.  Grand ideas, but unfortunately, there is never enough time in the day.  Though he doesn't often say it out loud, he has been admitting that he won't live long enough to build everything he wanted to.  I'd be thrilled if he would downsize his junk collection by fifty percent, but it would be as hard for him to part with the junk as it is for me to part with the garden areas.  Hmmmm....seems we're stuck, doesn't it?

Back in July, I was out in the Back Eight surveying some of the scrap iron we have waiting for inspiration.  Probably more than ten years ago, a friend of ours asked Carl if he had any use for some  iron stampings in an oak design.  They were originally railings on her father's house, but were removed at some point.  We loaded them up on our trailer and they were put with the pile of 'someday' projects.

Someday came and it was time to create something before the poor stampings rusted away into nothingness.  Carl (who really doesn't need any more work to do) semi-reluctantly loaded the railings on to the car trailer and hauled them up to the front yard.

There he sat, contemplating what he could make out of a few hunks of old railings. 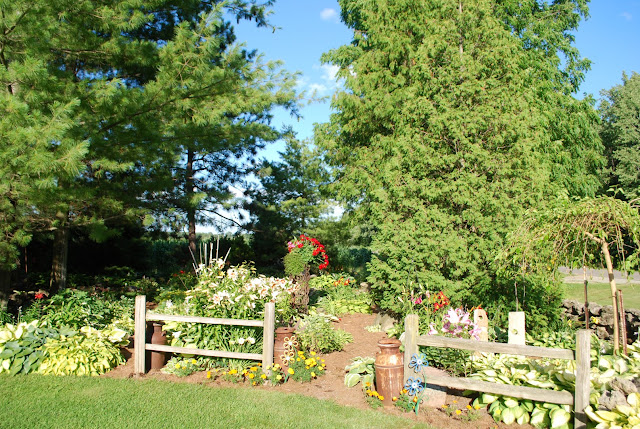 My idea was to make a small structure for the garden just off the house.  We had the cast iron planter there (another Carl Original) but the garden was a little blah. 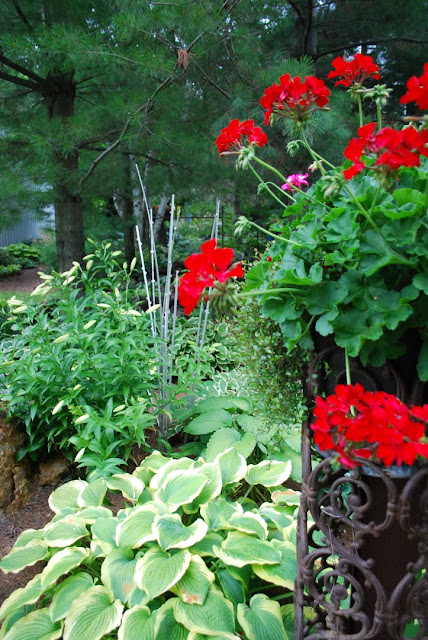 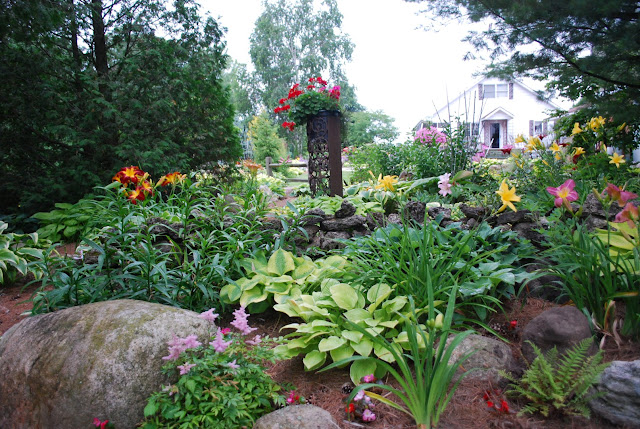 I was picturing something like a small archway or a little gazebo-y thing; Carl sighed and said, ok, I'll take to the shop and see what I can come up with.

In a little under ten hours, he was done with the, uh, um, Thing.  We didn't know what to call it.  And do we paint the Thing?  Or leave it half white, half rusty?  Carl took the high pressure washer and blasted off the flaking paint chips.

Once he had most of the paint off, the debate went on, do we paint it, or leave it rust?  I told Carl that even though I know very little about the science fiction show, 'Dr. Who', I couldn't get over how much the Thing reminded me of the police call box that Dr. Who uses for time travel AKA, a TARDIS which is an acronym for 'Time and Relative Dimension in Space'.

I liked the thought of having a place to go in the garden when I'm sick of weeding that might magically transport me away from my troubles, something like a Time and Relative Dimension in Garden?  TARDIG?

And that was what led me to pick a very TARDIS-y color of paint.  Carl was not sure of my selection at all (and neither am I) but it's only paint and paint can be changed.


So, to review, we went from this: 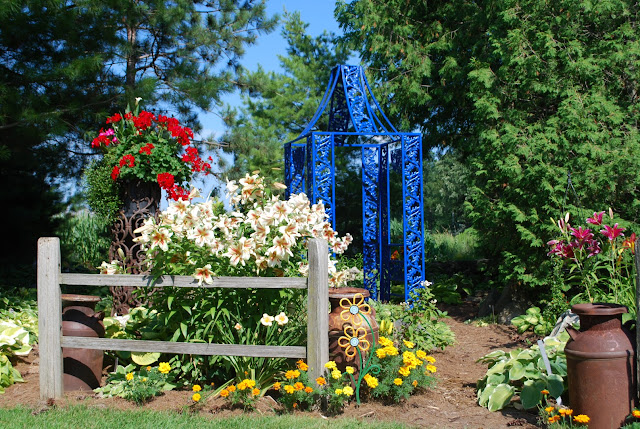 I will say one thing for the TARDIG, it really stands out. 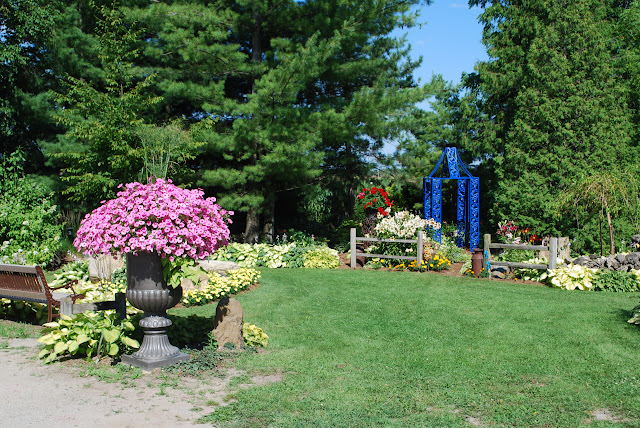 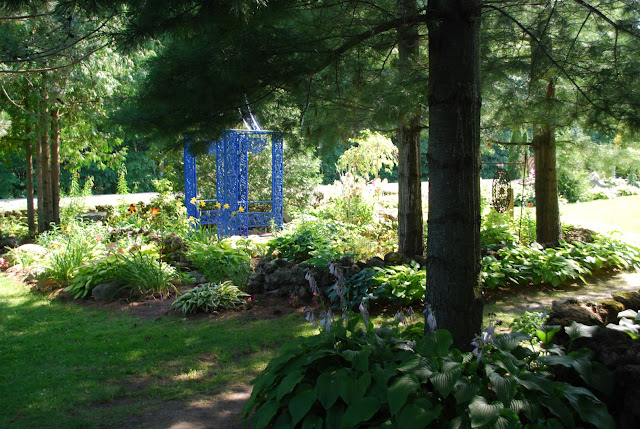 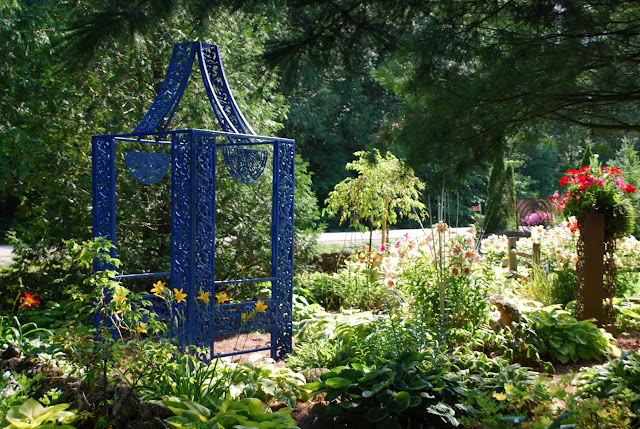 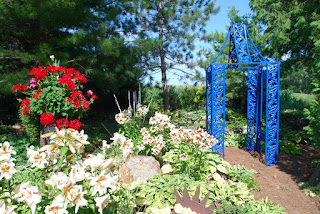 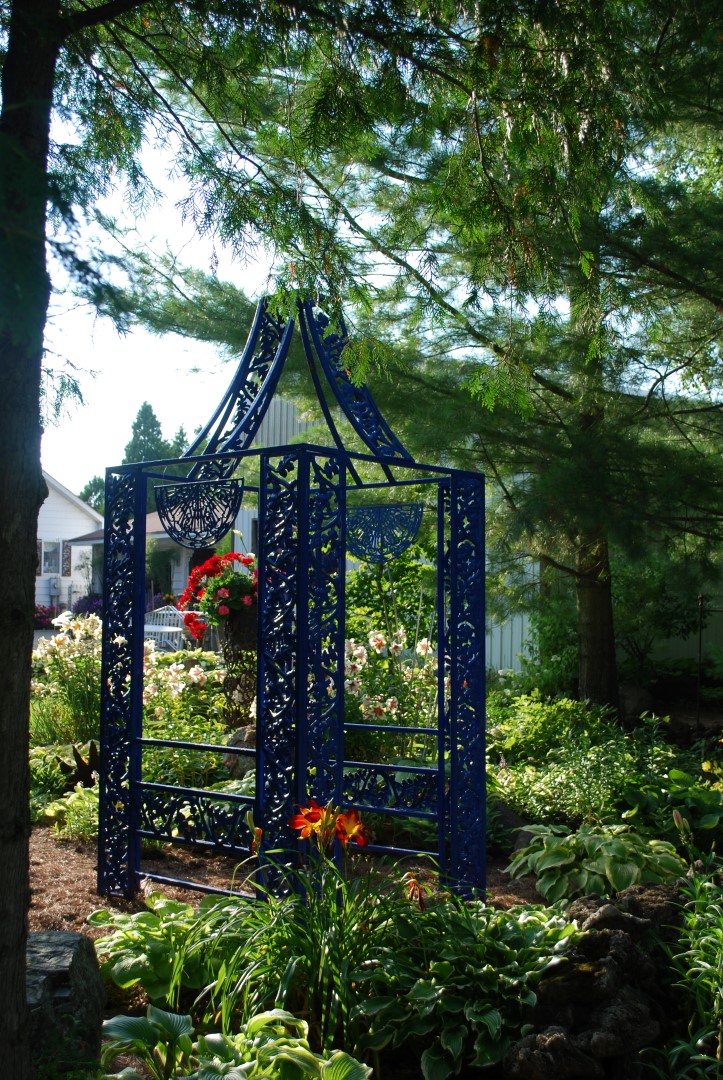 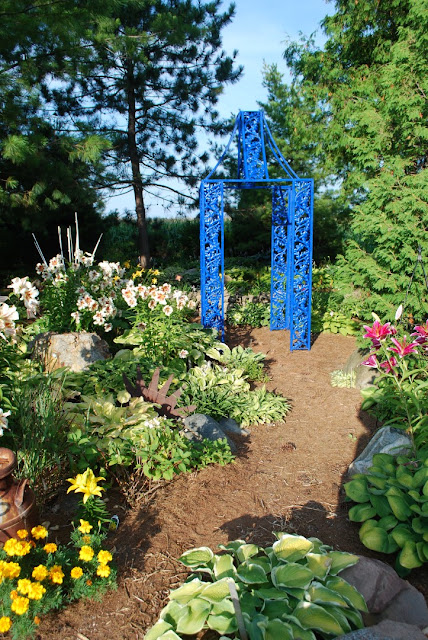 Good or bad?  Time will tell. 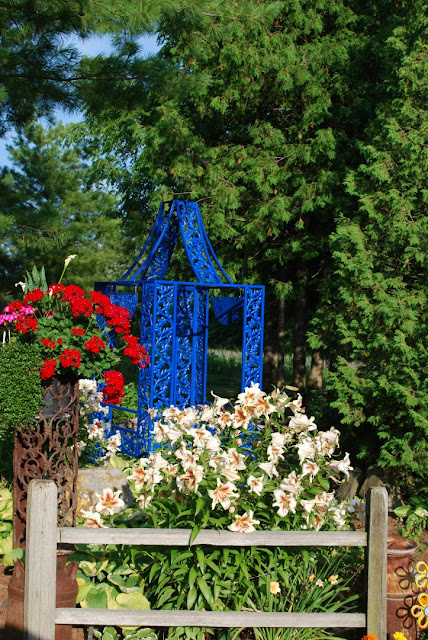 I will admit, the Thing is different.  And Blue.

But heck, they make a lot of different colors of spray paint.
Posted by Karen at 12:18 PM

I like the tardig, Karen! The blue is very pretty! Carl is so creative. I enjoy catching up on your gardening year; I've missed you, Karen.

Oh my gosh!!! I LOVE TARDIG! Carl is so talented. He and my Mark would have gotten along just great.

You've still got some lovely blooms, but from the sound of your weather changing, not for long. I can't wait to see Tardig surrounded by snow at different times of the day. FANTASTIC it is going to be.

Oh, I like it! I like it very much! Can I visit next spring or summer so I can see your amazing garden firsthand?! I can't wait to see the TARDIG surrounded by new plants next year!

Love the TARDIG, but not so sure about the blue color. I would have been very tempted to leave it rusty. I'm glad Carl finally pulled all those bits of railing out of his stash to build something. He's a treasure.

Wow. You are so lucky to have such a creative hubby. I really like this structure and think it will look great against the white snow in winter too. It really looks amazing as does the garden it is in. So pretty!

I love TARDIG!!!! Even the color :) My husband is always telling me I have more PROJECTS than I have days left to do them in :( I won't admit it to him but I think he's probably right :) We have fewer and fewer blooms here too :( Time to start planning next years garden.

Hi Karen! I'm so glad to see your post! Looks like I have another one waiting for me! You're supposed to be in my blog roll, so I'm disappointed I'm so late! I love the blue! And how fabulous it will look among the snow...in a few minutes probably! There are just too many projects, aren't therr? You two are so talented. Love your gardens! How is your mom doing? I hope she's moving and feeling good. Did she get any painting done this summer?

Beth, thank you! I've missed blogging very much, too.

Rainey, I know Mark and Carl would have been great together; just think of the projects they could have accomplished. :-)

Beth, by all means, we'd love to have you visit!

Alison, yeah, I debated painting TARDIG too, but it was half white/half rusty. We'll see how it looks in the snow and if it's really silly, we can always recycle the whole thing, lol.

Thank you Pamela, we'll see if brightens up the winter landscape. :-)

Carol, it's good to hear other people have a lot of 'someday projects' too, we don't feel as silly now.

Stephen, thank you! Mom is doing ok, not great, but ok. She did some painting for me this summer on my cast iron lantern collection, but I'm having a hard time getting her too inspired about anything free hand lately. A big surprise for me was her wish to come and help with fall cleanup this year, it was good to see her in the garden again. Thank you for thinking of her. :-)

I think your husband is a creative genius, and I'm always so impressed with what he creates out of scrap! I just love the name of your TARDIG and its inspiration. There's a house in the town next to us that has one of those red British telephone booths in their garden, and I am so in love with it. (If it had been my garden, you know a TARDIG would have ended up red...) And I think for the holidays you really need some blinking lights on it. Because that would be awesome.

Indie, red was a close, close second! You never know, it may end up happening yet! Having an actual callbox in the garden would be awesome, wouldn't it?

I love blue in a garden and dont think you could have picked a better colour, I love your musings and the way you turn trash intio treasure. Reduce the size of your garden? nah I cant see that happening any time soon.

Well Karen.... you know how much I like that shade of blue so I'm all on board on this project! I saw your note on my post.... we've been out of state for a while but thanks for your comment.... I found some neat conifers so have to get them in the ground... after all, it's getting late! One of these days, I need to get the lamp I'm working on done.... thinking about doing a lotus for myself this year while I still am able to! Take care, Larry

That Carl is a keeper! Your tarding, especially the color because it's so different from everything else in your garden. Bravo!

That is so amazing that your husband can just find some scraps of metal and make something that people would pay thousands of dollars for! And I love the name. :-) Hope you are settling in for a cozy winter -- we had snow last night and today, so it really feels like winter now. -Beth

Carl is so creative and I love the Tardig. Blue really pops in the garden. I love the metal pedestal near it with the geraniums planted in it. Everything still looks great.