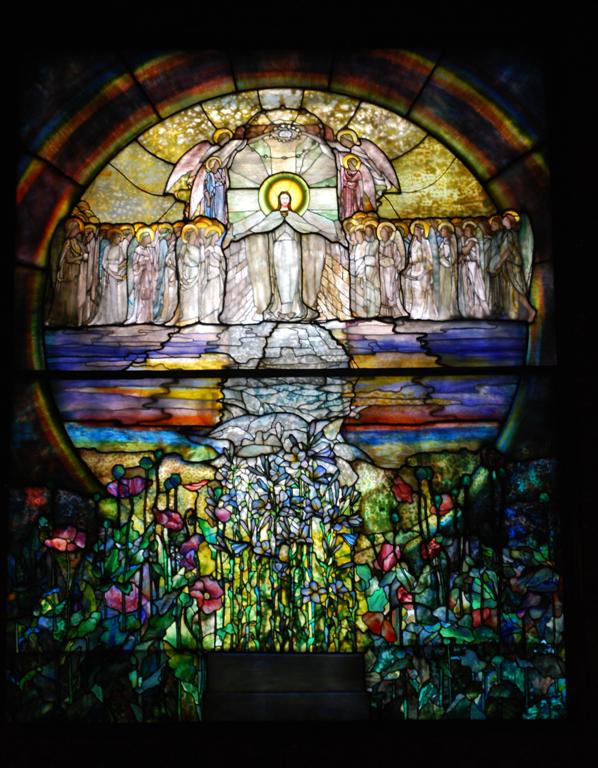 Easter has come and gone.  I love the stained glass window pictured above that is aptly named, 'The Flight of Souls'.   This original Tiffany window is installed in the Wade Chapel in Ohio.  My picture of it does not do it justice; in person it is absolutely breathtaking.

2015 has been a difficult year for us so far; we lost our dear dog, Pudding on New Year's Eve and sadly, Teddy was laid to rest on the Saturday before Easter.  After fourteen years of hearing the 'jingles' on his collar and his tiny toenails clicking on the floor, the house is now very, very silent. 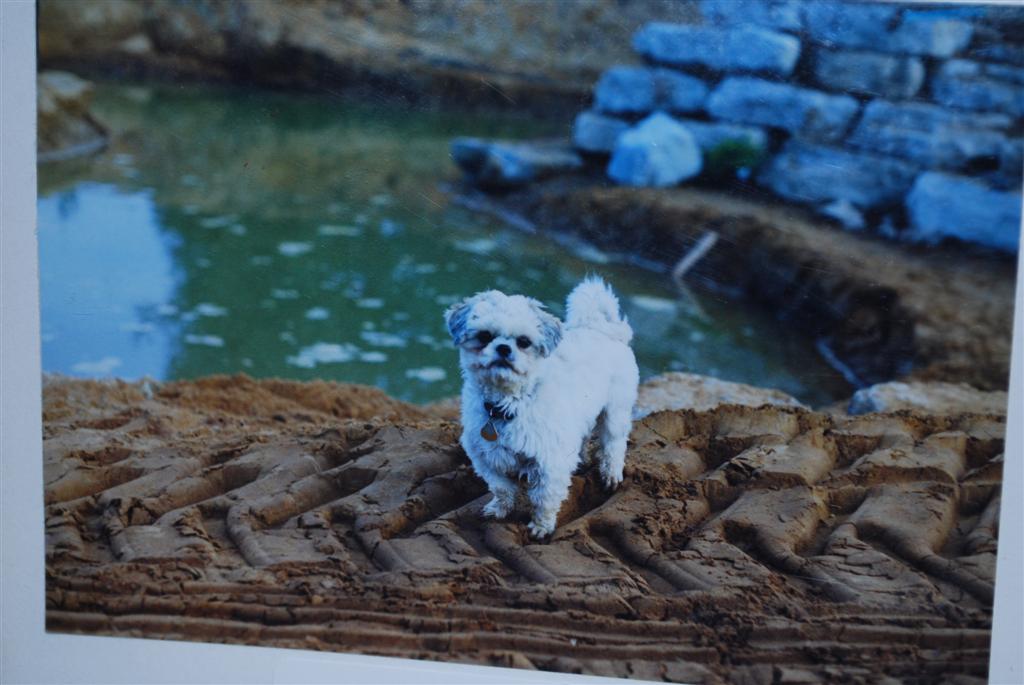 Teddy in his younger years...we were working on the Quarry construction then and his white coat was most often orange from the sand.  He loved to dig!  I wish I could have let him dig to his heart's content, but he'd get it in his eyes and his ears and then we'd have to go to the vet, so we had to curtail his excavations somewhat.

Teddy was Joel's dog, through and through.  He tolerated me as the one who groomed him and fed him, but Joel was his special person.   Whenever Joel would lie down on the floor, Teddy would jump up on his chest and his tail would go to beat the band.  He was always happiest then. 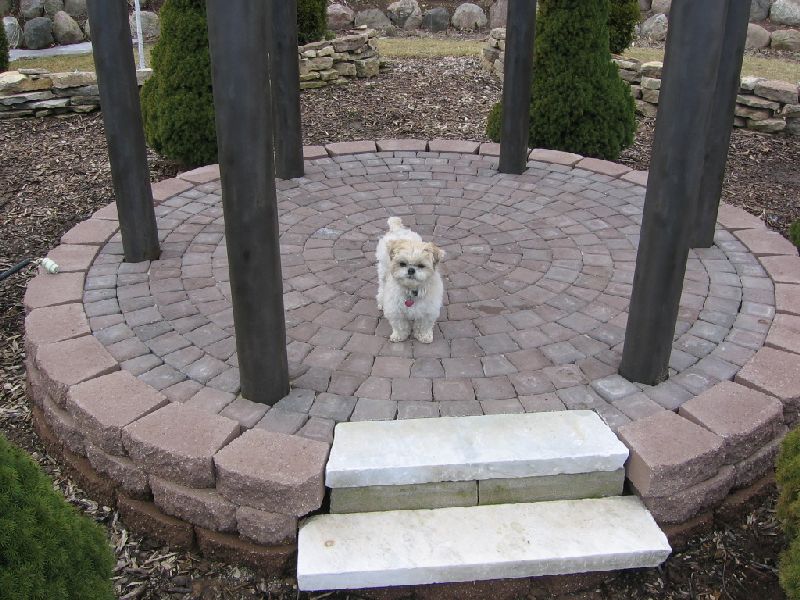 When I first brought Teddy home, an acquaintance remarked, "Why would you want a little dog like that?  He's not going to be any good out in the garden."  Another person referred to Teddy as a 'barking cat'.  True, he was all of ten pounds, but he thought he was a Big Dog.  He had a big dog's heart and was truly fearless.  Sparky, my mother's late great German Shepherd, and Teddy had a lot in common.
Teddy was an only dog until we adopted his sister, Pudding when they were both nine years old.  At first, Teddy's nose was a bit out of joint; he really couldn't see why he had to put up with this female interloper.  There was never any growling or snapping between them, but Teddy more or less gave Pudding the cold shoulder for months at a time.  Pudding was pushy with him; she went out the door first and her undying devotion to me made him have to play second fiddle to treats and petting. 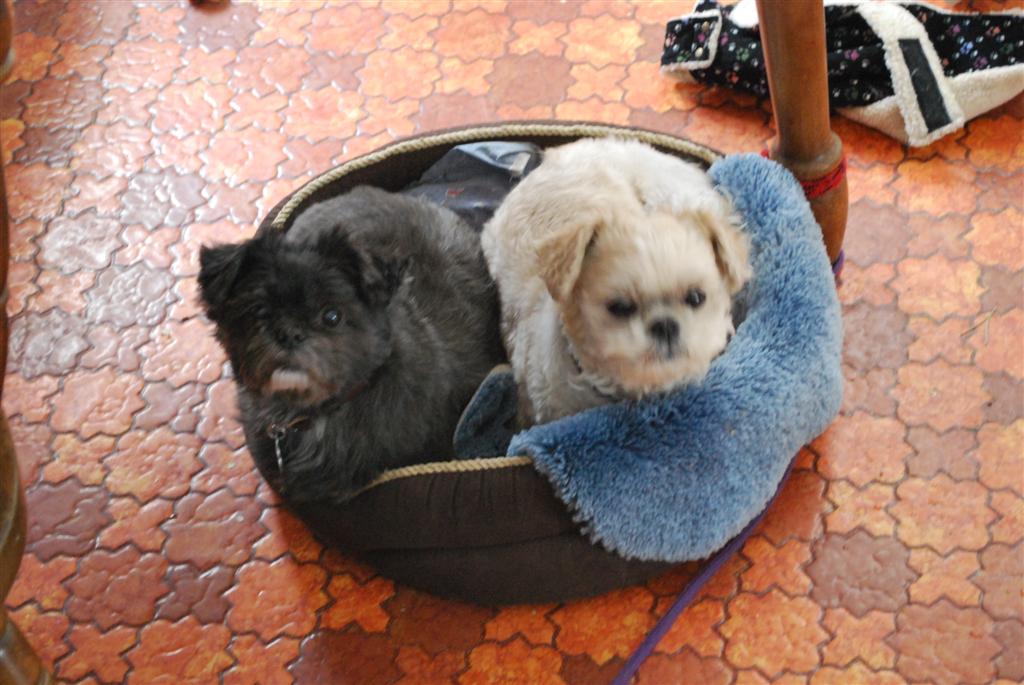 I was completely shocked when one day I found them in the same dog bed.  I knew then the hatchet had been buried, they'd come to an uneasy truce. 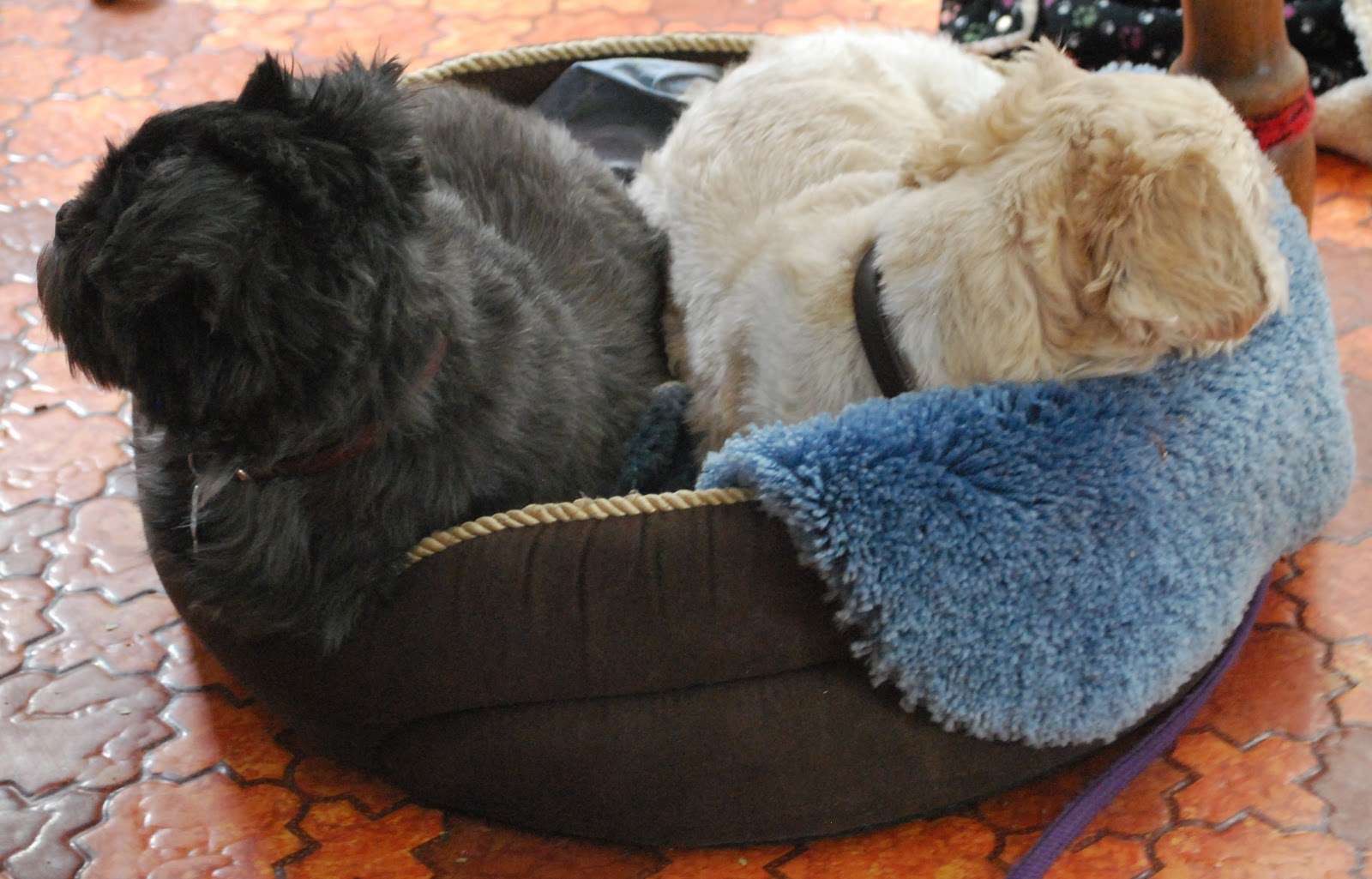 Either that, or they were both too stubborn to move. 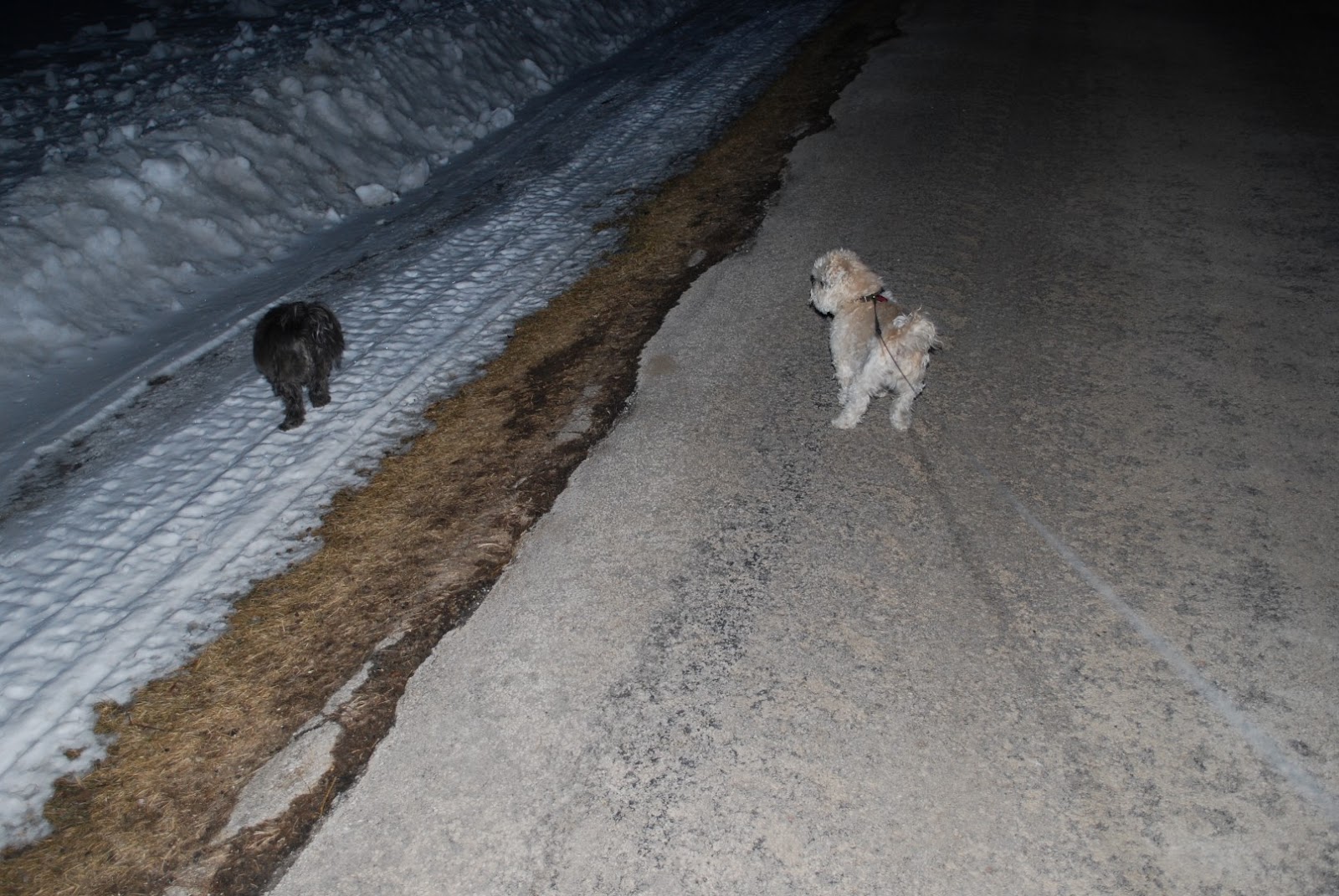 We had so many wonderful walkies together.  Teddy and I would walk for miles before Pudding came to live with us, he was an excellent walking companion. 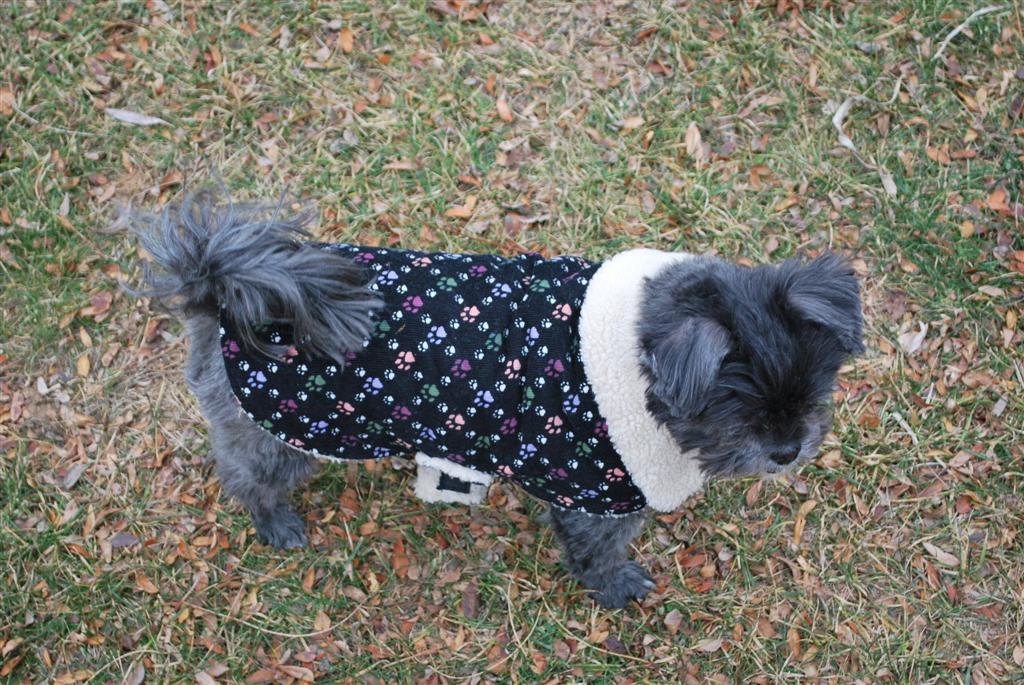 I can't really explain the hole in my heart; if you've ever loved a pet, you'll know what I mean.  Teddy's been gone three weeks now and I'm over the acute loss phase, but I still catch myself glancing at the couch to see how he's breathing.  His congestive heart failure was becoming more and more of an issue; he'd been medicated with what our vet called the 'trifecta' of heart medications for over two years which was remarkable in itself.  The usual progression of congestive heart failure can be much faster in some cases.
Teddy didn't like walking much in the last year.  He was happy to go outside for his potty breaks and sometimes stroll a little around the yard, but for the most part, the long walks were over.  He just didn't have the stamina for it any longer. 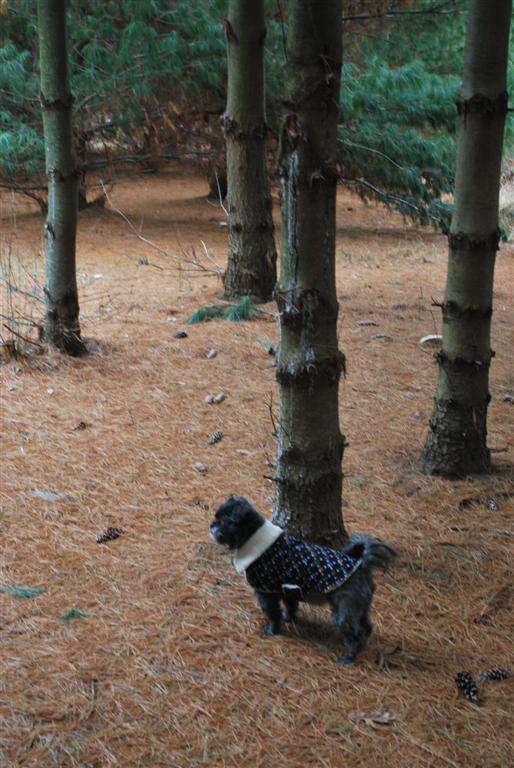 Pudding was always my intrepid follower; where I went, she wanted to be.  She loved the fields and the woods, in my dreams she and Teddy are finally free of all their woes. 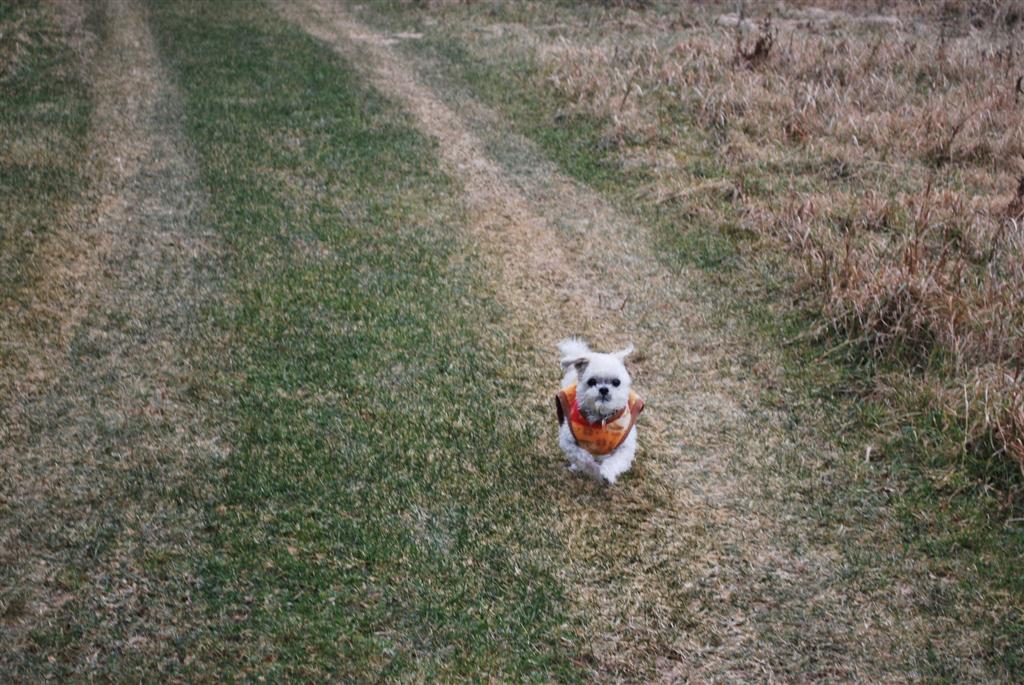 Teddy loved to run for home, he always had such a proud carriage.  Carl used to wonder how many Shih Tzu's it would take to pull a dog sled, not that we ever tried. 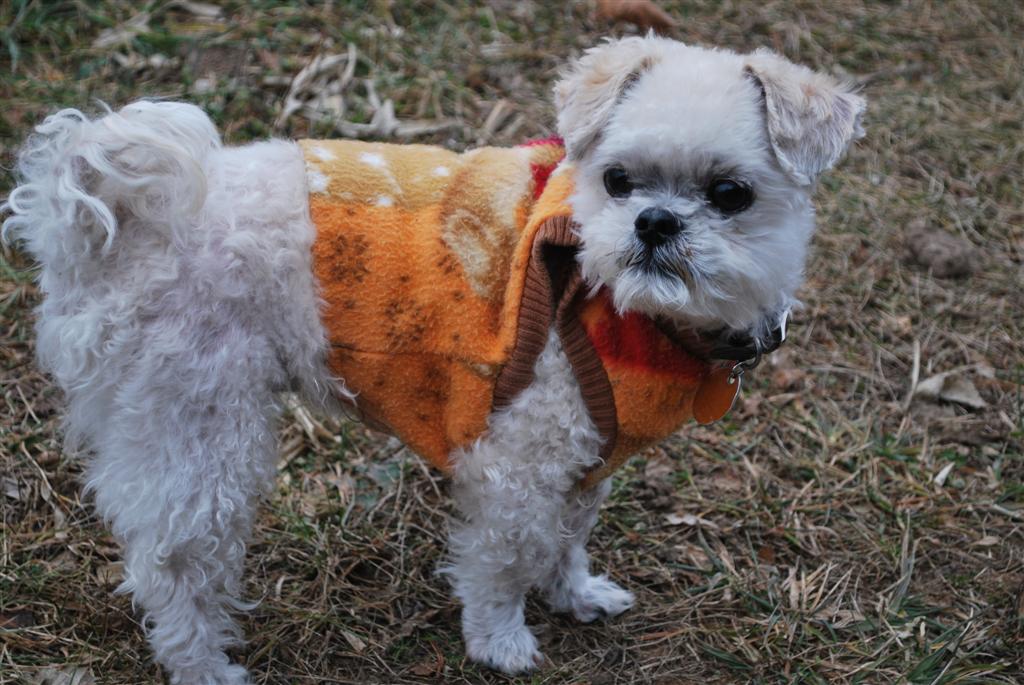 Whenever I took him out in public, people always wanted to pet him.  He was adorable, but unfortunately had no use for strangers.  He had an attitude, no doubt, but once he got to know a person, he was fine.  I used to ask people, "If he was a big dog, such as a Rottweiler, would you just rush up and pet him?"  When they said, no, they'd probably be more cautious, I said, "Well he thinks he is a Rottweiler, so if you treat him with respect, he'll do the same for you."

He had an insatiable appetite for playing ball; I don't know how many times we threw his 'spike' ball for him; it was really amazing how he never tired of it.  We did grow tired of the game sometimes and would resort to putting his ball in a pair of blue jeans with the leg knotted loosely shut.  He would work on that knot for up to an hour if he had to and usually always succeeded in getting his ball free. 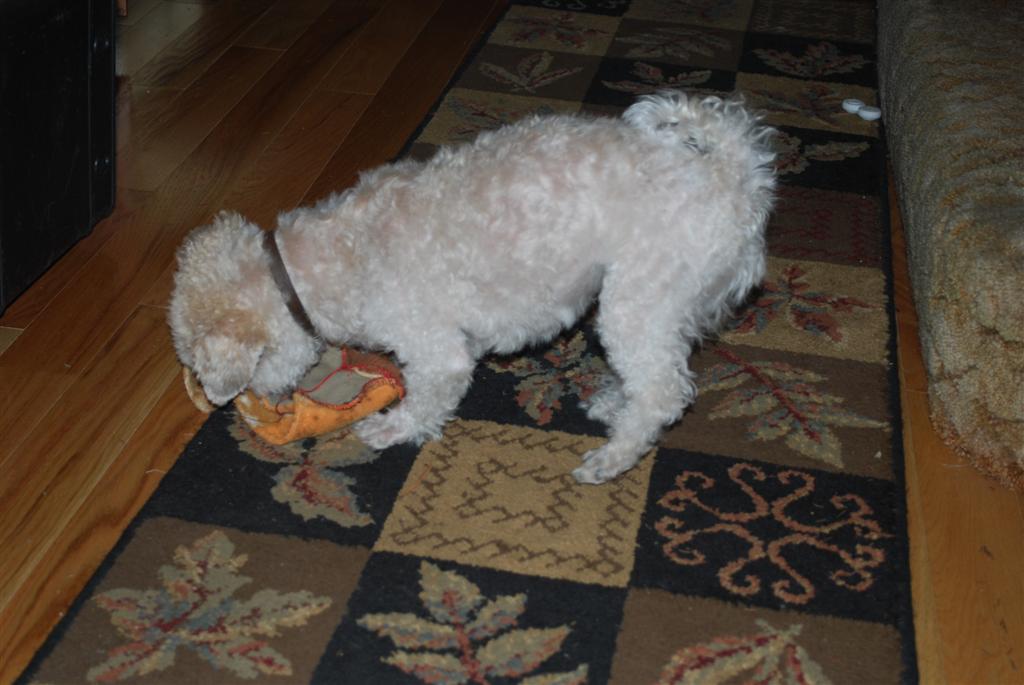 In the picture above, he's 'mauling' his 'old man jacket' which was always his ritual after having it removed after a walk. 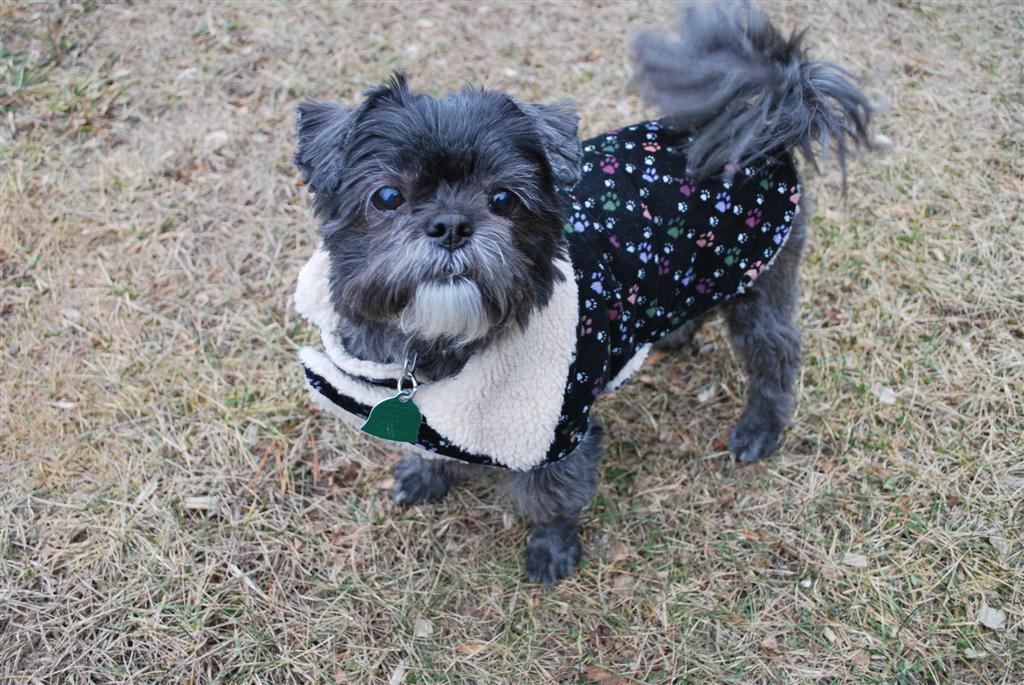 Pudding, on the other hand, was everyone's friend, she would lick you to death if you let her.  But I have to admit, she was truly my dog.  Of all the dogs I've owned, she loved me completely.  Pudding, my Shadow. 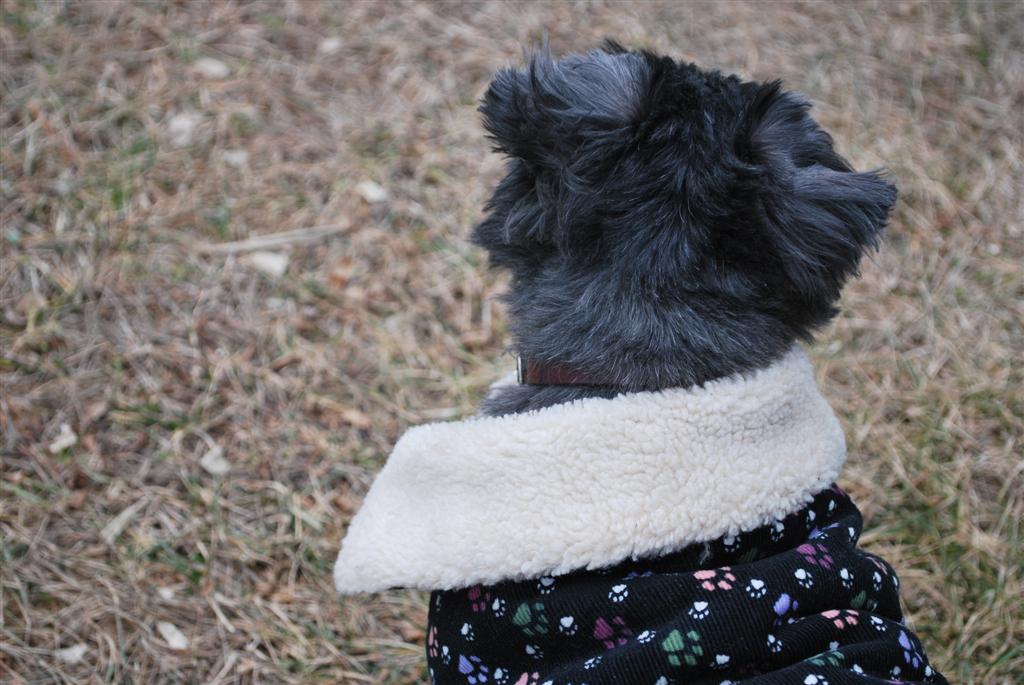 Carl always said she'd sit and listen for my footsteps when I was outside, never resting until I came in to be with her.  I do miss her joyous welcomes so much.  When a dog loves you and they throw a ticker tape parade whenever you come home, it's such a wonderful thing.  To think you are the most important being in the world to a dog is, well, it's overwhelming. 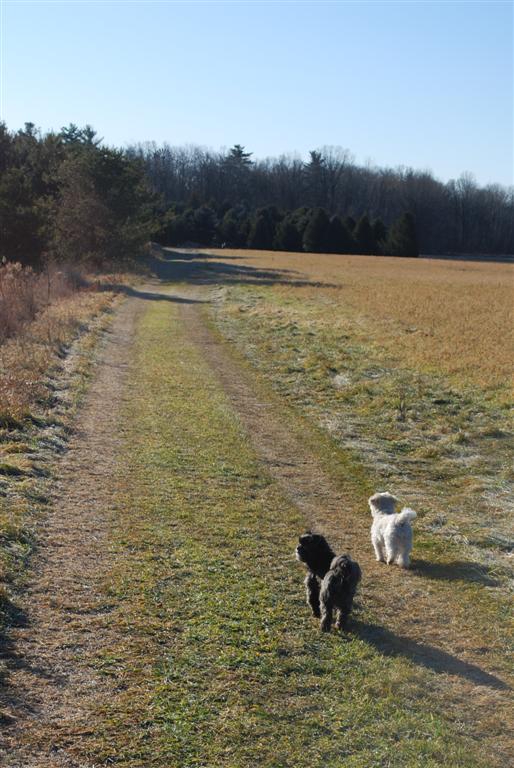 Our time with our pets is far too short...their lives are accelerated so much.  I don't know if it's really true that every dog year is the equivalent of seven human years or not, but it does seem reasonable.  Both of them were fourteen, which in human years would make them ninety-eight.  A ripe old age, but still, too short. 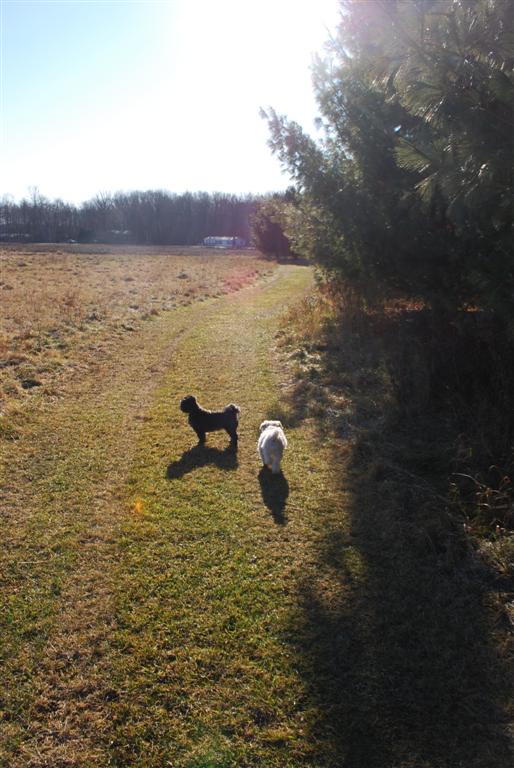 They are together now; roaming the fields on the other side of the Rainbow Bridge, waiting for the day when we're reunited. 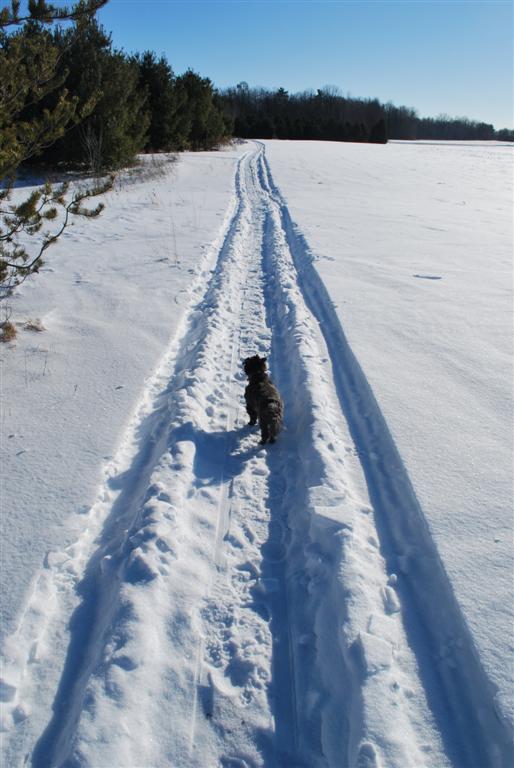 As I said before, Teddy was slowing down.  He could still jump up on the couch (which is a massive feat, I could never jump up on something twice my height) but his eyesight was growing dimmer as time went on.  His hearing was also very bad, if I called him, he would run to the other room.  It was comical, and very sad.   I never petted him unless he knew I was there; he would startle so much it scared me; I was afraid he'd have a heart attack just from the fright of someone touching him when he didn't know they were there.  We always made sure to get his attention before we petted him; he was always grateful for the gentle scratch of his tummy. 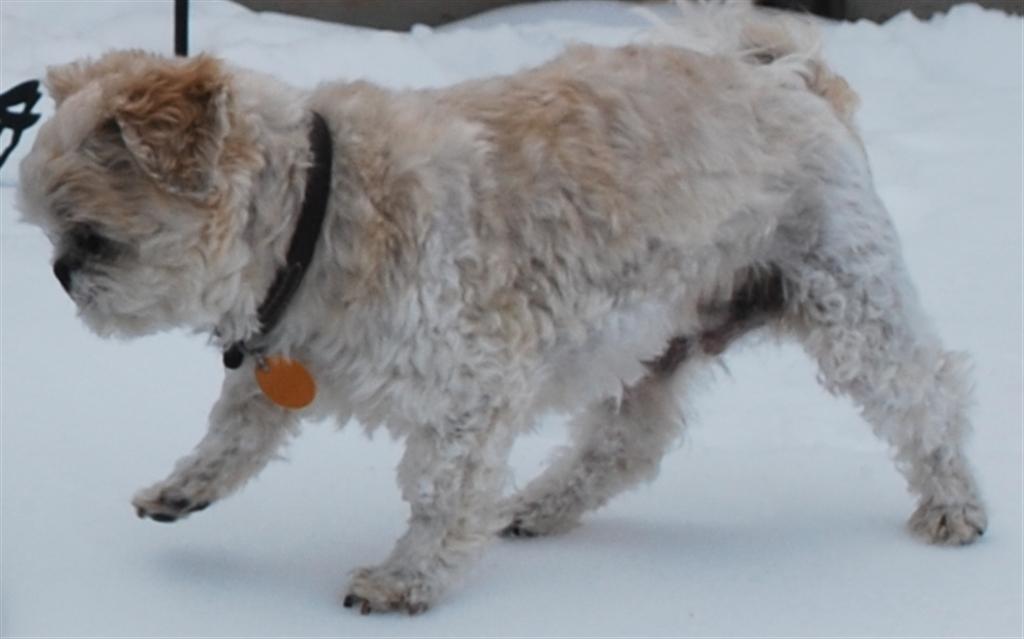 On his last morning, the Saturday before Easter, I woke up late.  I'd had a bad cold and had slept in.  Carl was home, and I asked him if Teddy had gone outside yet.  Carl said, no, he hadn't left his dog bed.  It was already 9AM; highly unusual.  Even with all of Teddy's water pills and failing eyesight and hearing, he never broke his potty training, so I knew he must not be feeling very well.  Still, he got up when I came up to check on him and wanted to go outside.  He made it to the driveway, but then started to teeter ever so slightly.  My heart sank.  I went out and got him back in the house, and he made it as far as the living room before his little legs gave out.  He was panting heavily and I saw the exact same signs that Pudding had the day she died.

I called Joel. We both knew what we had to do; it was time to say goodbye.  I tearfully made the call to our veterinarian; the office was closed.  Teddy was lying there looking at me, wondering why it was so hard to take a breath.  I took a chance and called another vet's office that had recently opened in our small town, and was happy to hear they would fit us into their busy schedule as soon as we arrived.  What a blessing it was, I am so very grateful to the staff. 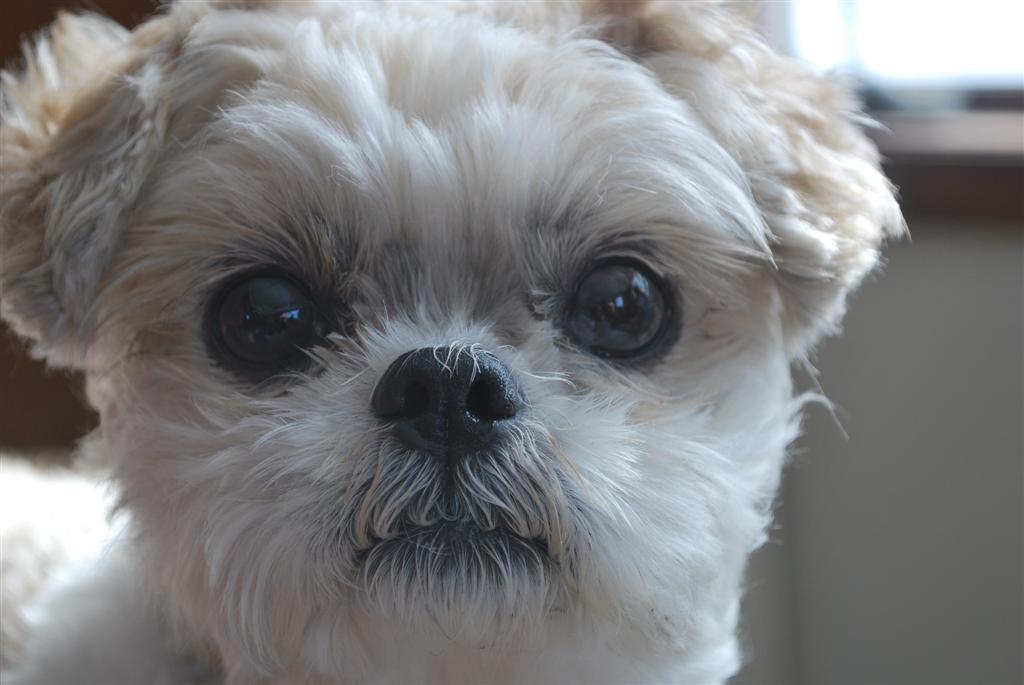 Joel arrived and we wrapped Teddy up in his dog bed and drove the three miles to the clinic.  The procedure took a little while, but it was painless; Teddy turned to look at me one last time before the anesthesia took effect and it was all I could do to stifle my sobs.  I didn't want him to think we were upset.  We wanted him to be free from his suffering.

I remembered when he was a much younger dog and had broken a dewclaw.  I had to take him to the vet to have the claw cut back, and they had to put him out for the procedure.  I remembered how heavy his little body felt when they handed him to me to take home to recover, how limp he was, and how I cradled him into his dog bed that time and petted him gently until he woke up.  The opposite was true this time, he was not going to wake up, but he was now finally at rest. 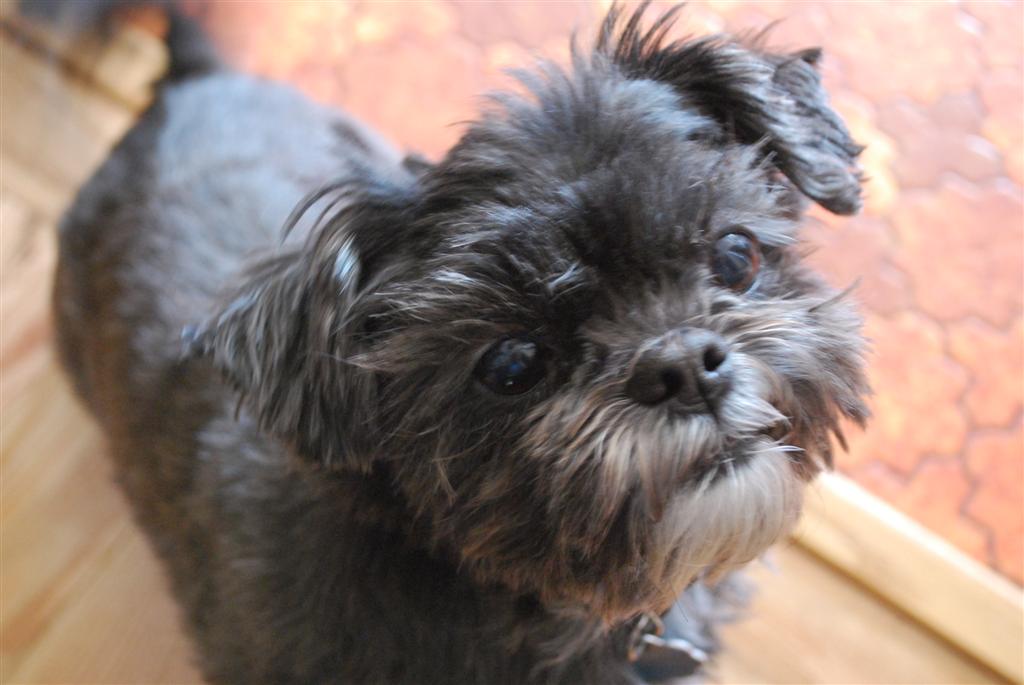 Our pets look to us to protect them, love them, and also know when to let them go, even when everything in our being wants to keep them with us for just a little while longer.  Their love never dies, as long as we remember them, they are always with us. 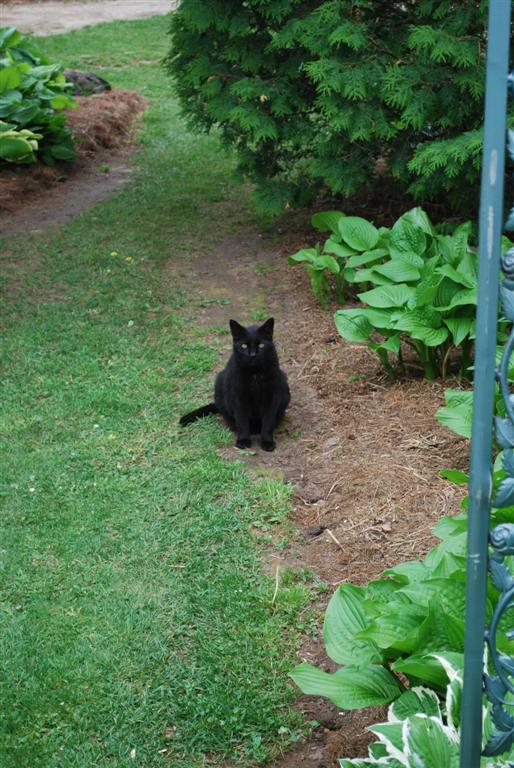 Our dear old kitty, Screech, has been gone now for over five years, but I still think I see him when I'm working in the garden at times. 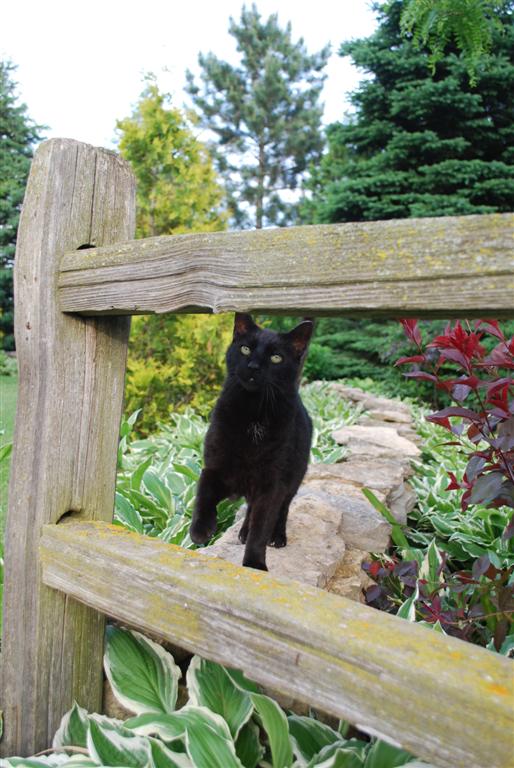 Screech was seventeen years old and we'll never forget him, either. 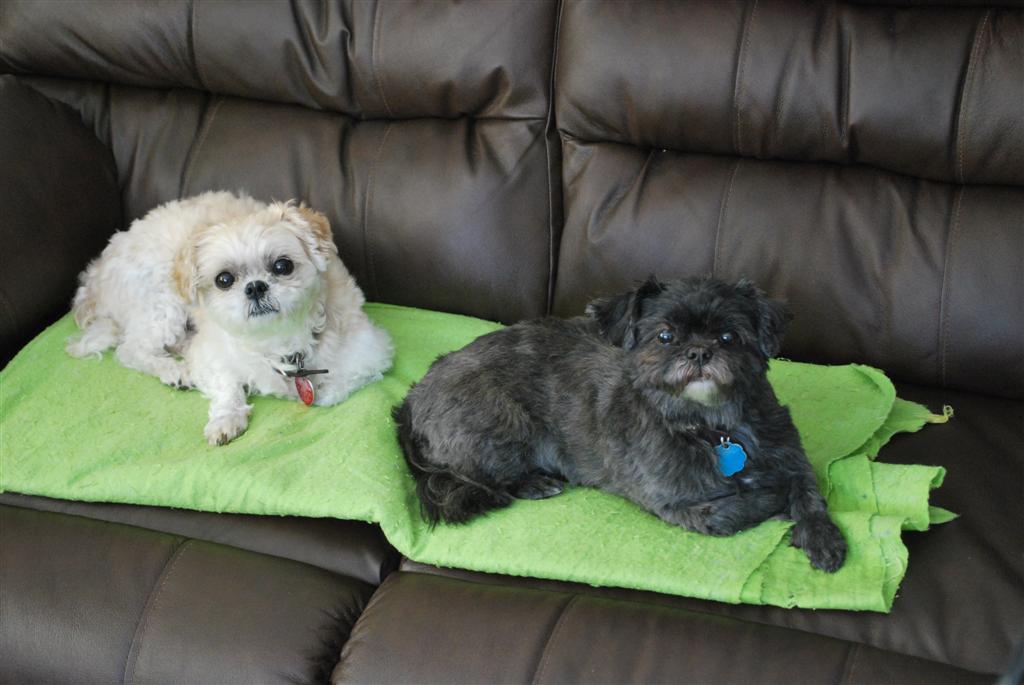 Our couch will never be the same; I'll always look twice before sitting down to make sure there aren't any tiny dogs perched on it.  Both of the dogs used to sit right next to me every day; it seems so empty now.  But we'll never, ever forget Teddy and Pudding.  How could we?

Teddy was a Big Dog. 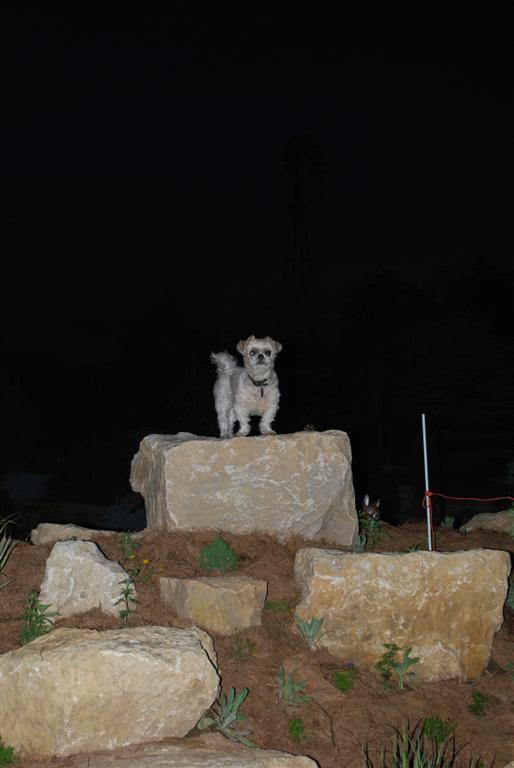