Last March, Carl and I toured a traveling Tiffany glass exhibit that came to Oshkosh, WI in 2014.  I was going to post about it sooner than this, but I'd misplaced the card from my digital camera until now. 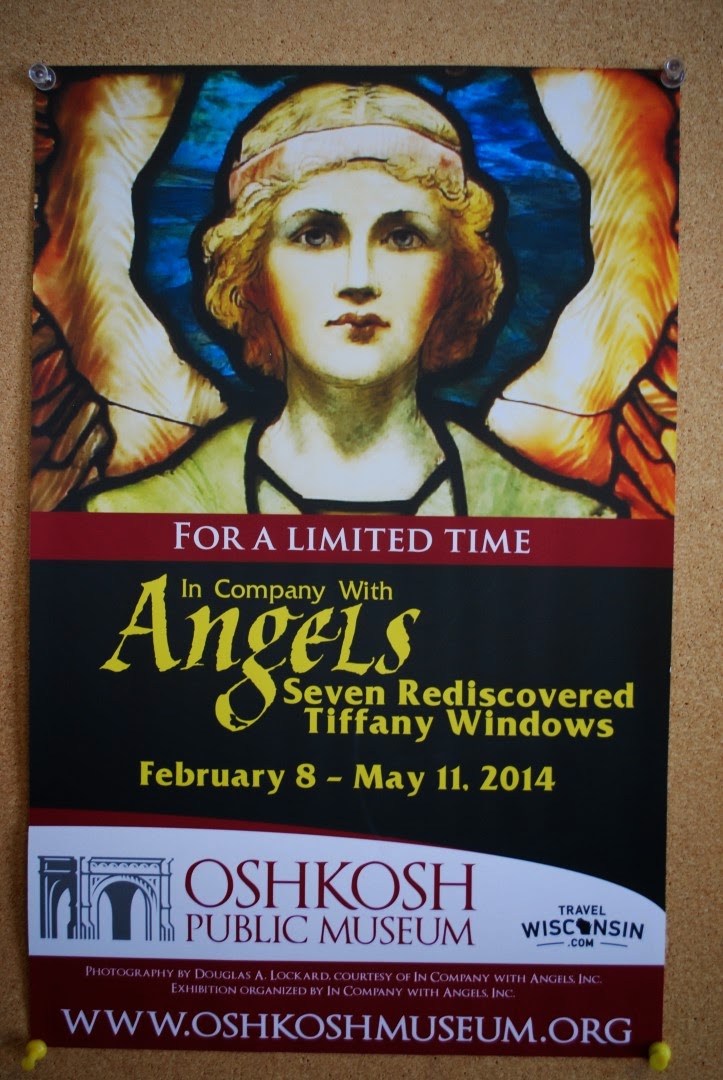 You can read about the fascinating history of the windows here:

The thought of all seven of these windows being stored in barns and garages for decades is almost unbelievable.  It was such a privilege to see these artworks in person.

Photography of the exhibit was not allowed, but I did take photos of the posters in the hall leading up to the gallery.  As we walked through the display with dozens of other visitors, no one spoke above a whisper, it was as if we were in a holy place. 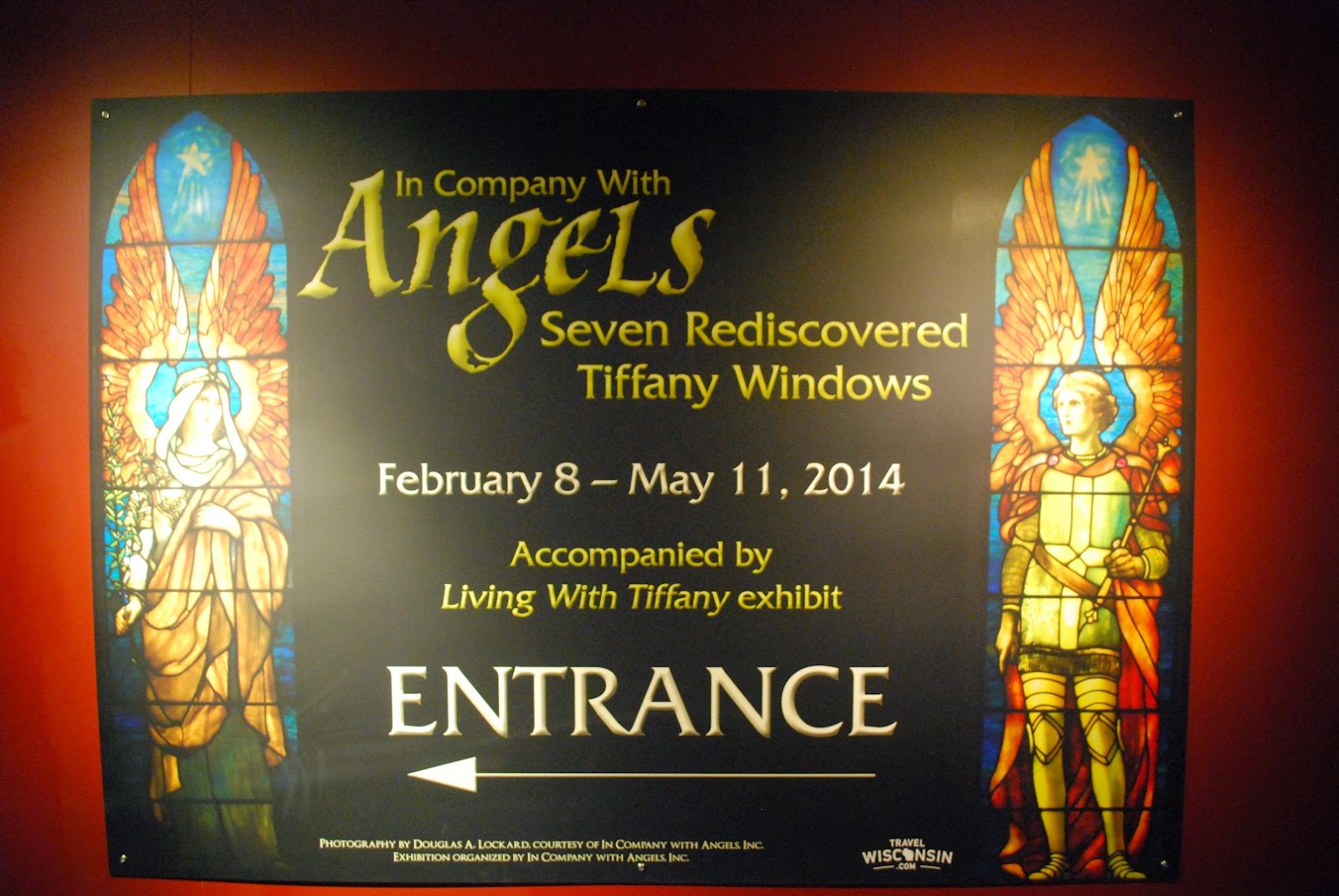 Carl and I have always loved anything and everything Tiffany, and it is a very rare treat to actually be in the presence of such gorgeous antiquities. 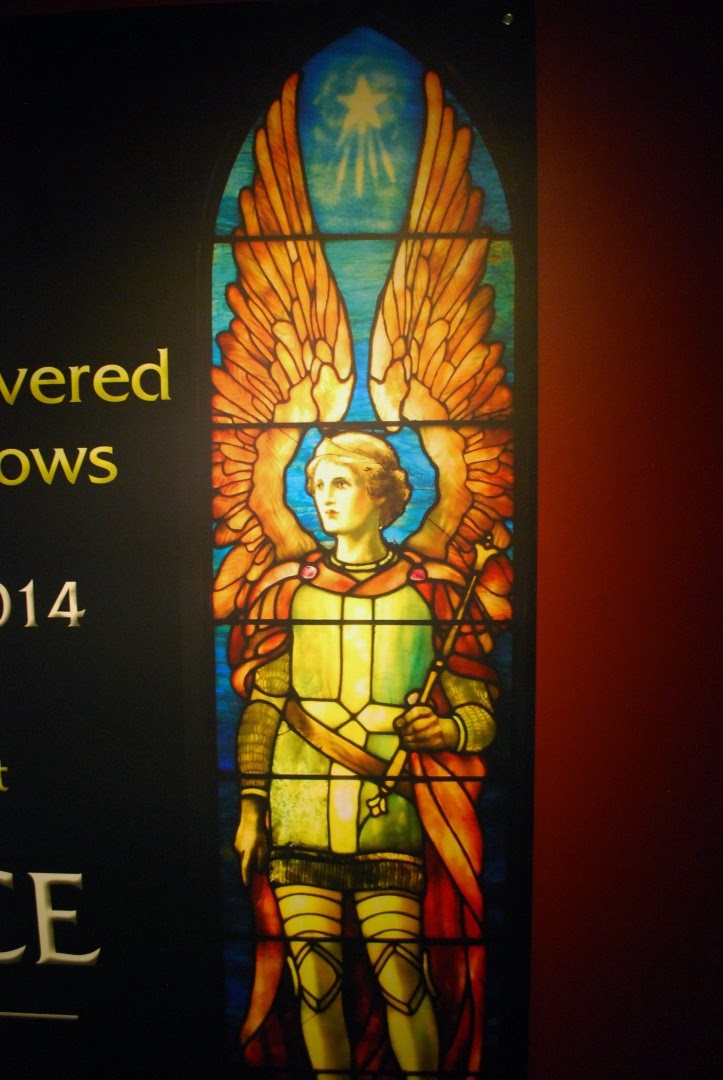 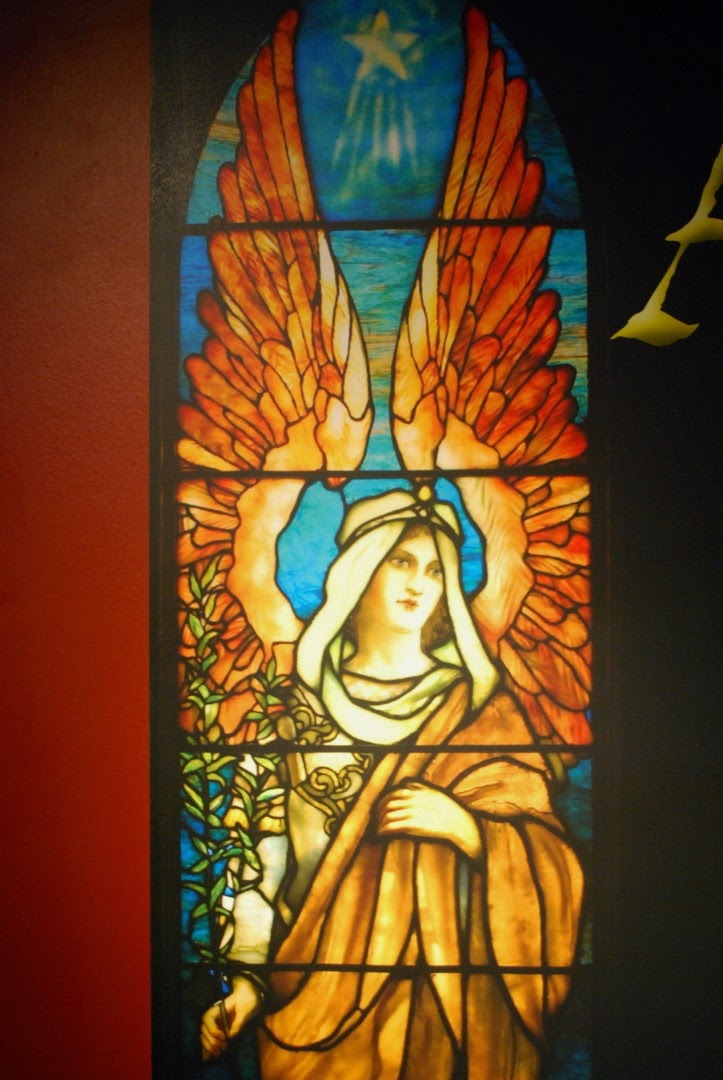 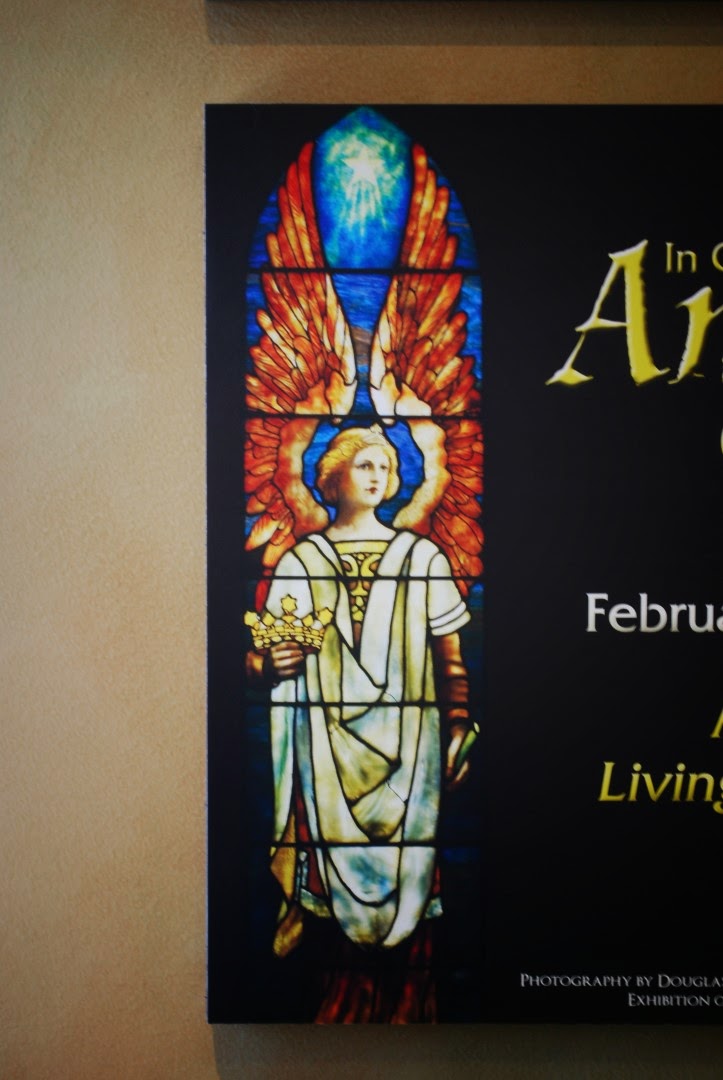 The poster pictures above do not do the windows themselves justice.  They were indescribably beautiful.

After leaving the gallery, Carl and I toured the rest of the Oshkosh Public Museum which was at one time the home of Edgar P. Sawyer. 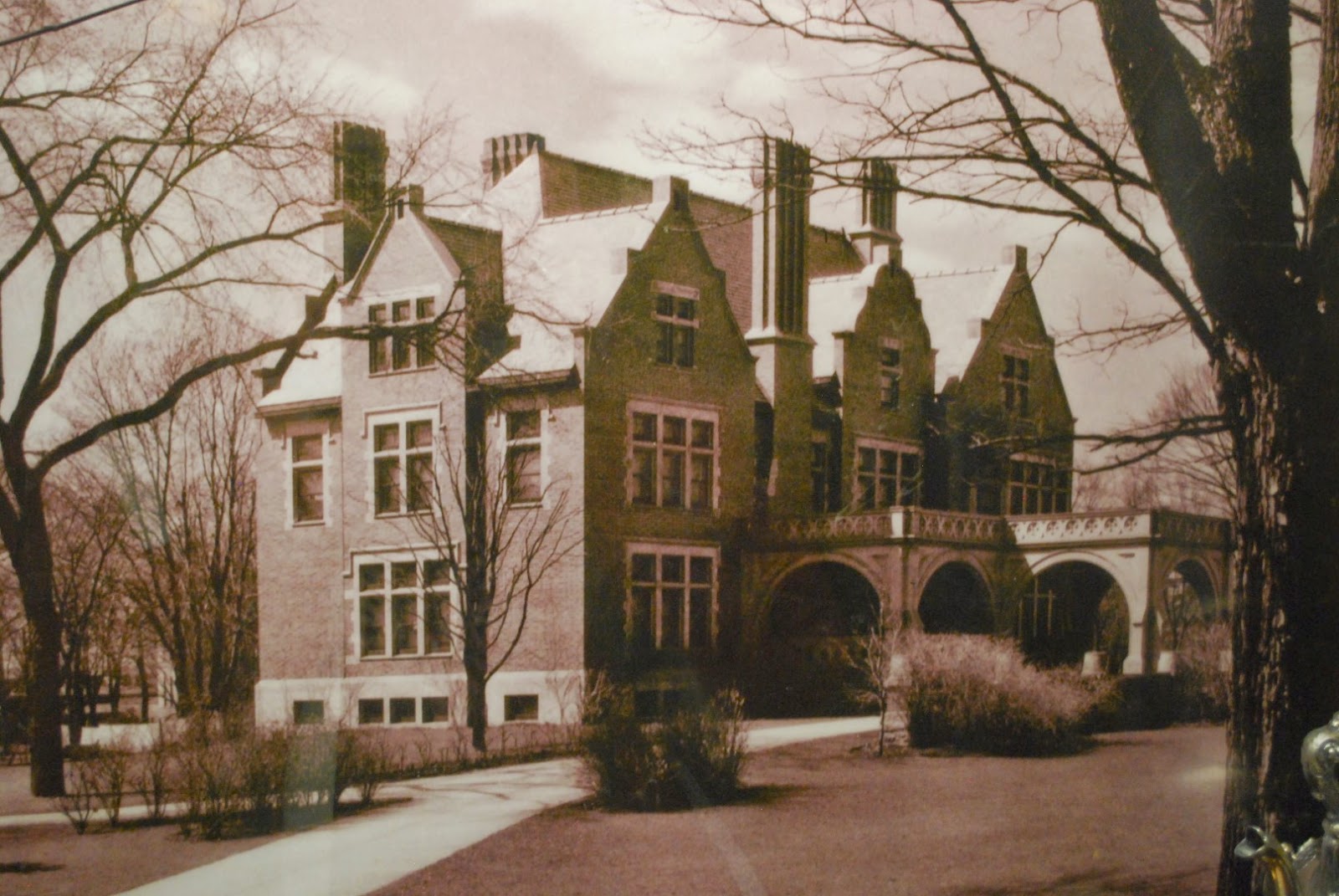 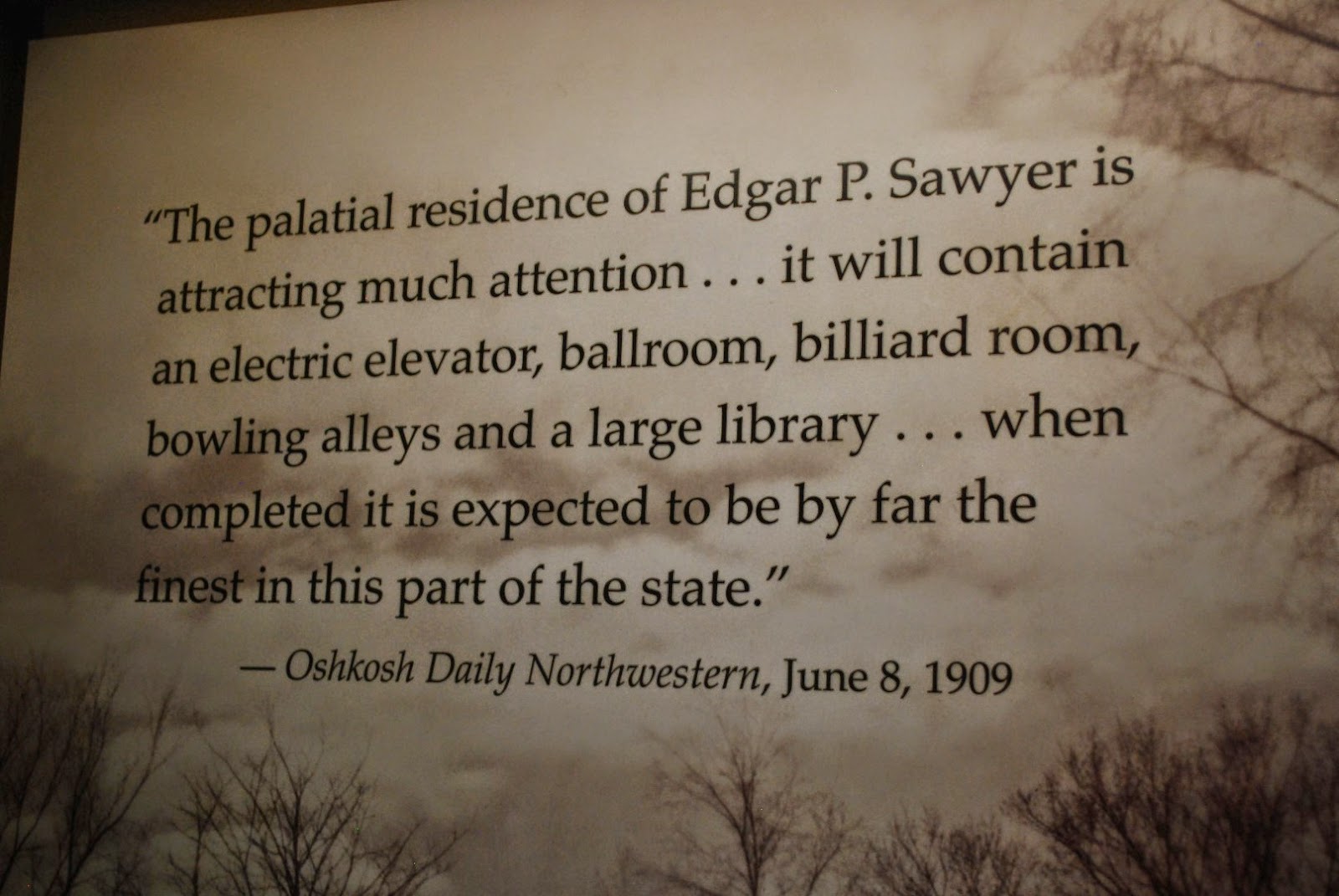 The mansion was converted to a museum in 1924.  The first time Carl and I toured the museum was probably in the late 1970's, just before we married. 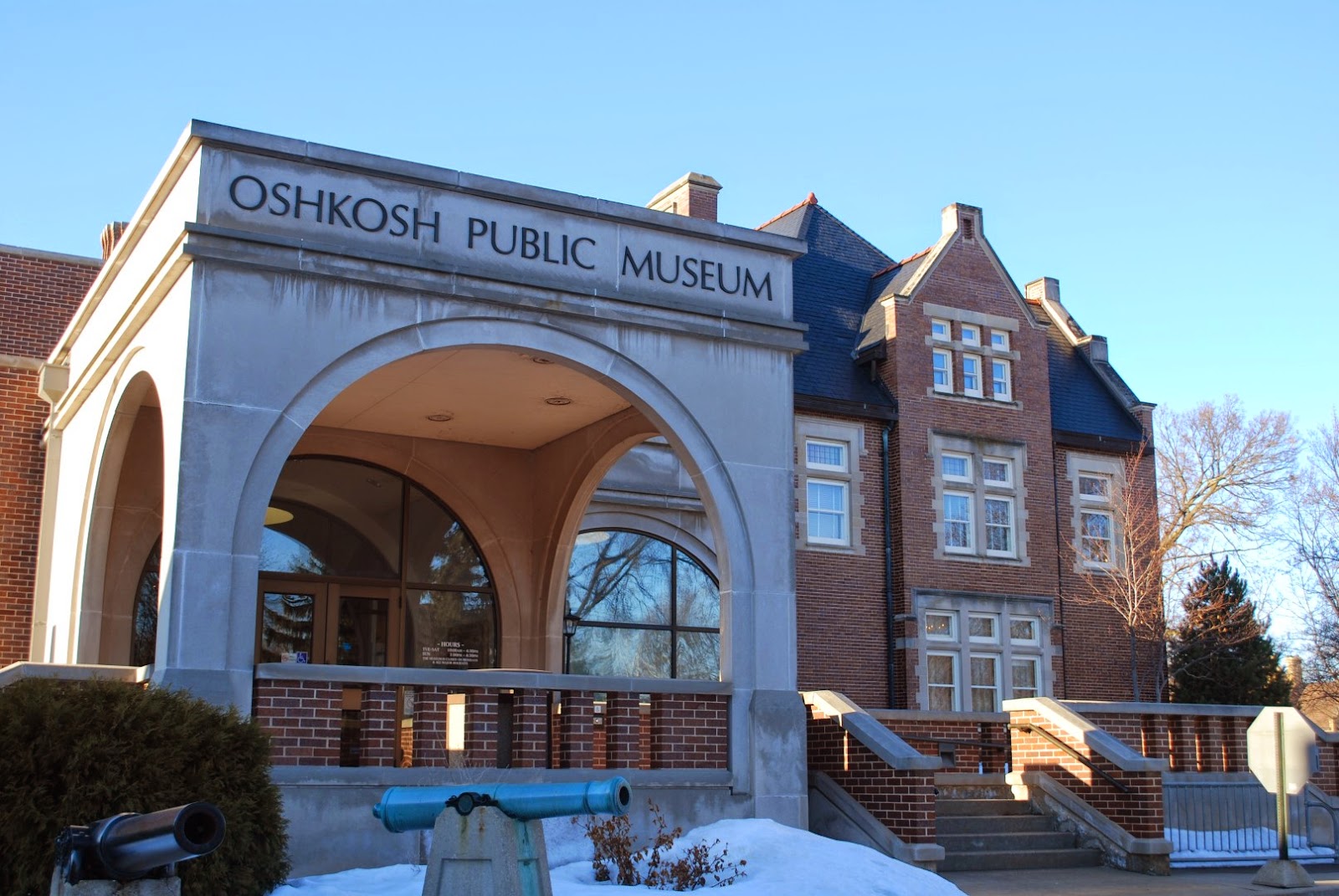 This is the way the museum looks now; there was extensive remodeling done after a devastating third floor fire in 1994.  I remember watching the news when the fire happened and being just sick at heart.  The interior of the Sawyer mansion had been decorated by Tiffany Studios and contains two glorious windows.  We were allowed to photograph the windows but the next time I go I will be sure to bring a tripod to keep myself steady in the dim lighting.

These were the first Tiffany windows we had ever seen in person and they made a huge impression on us as young adults, eventually leading us to make reproduction Tiffany lamps of our own.  My apologies for the quality of the following photos, but in my defense, there were many visitors to the museum that day for the Seven Angels Exhibit and I didn't want to hold up traffic.

This is the Wisteria entrance, and what a beauty it is.  From what I understand, this window was removed from the main entrance to the mansion to the new entrance in the addition, but apparently it will be eventually returned to it's original location. 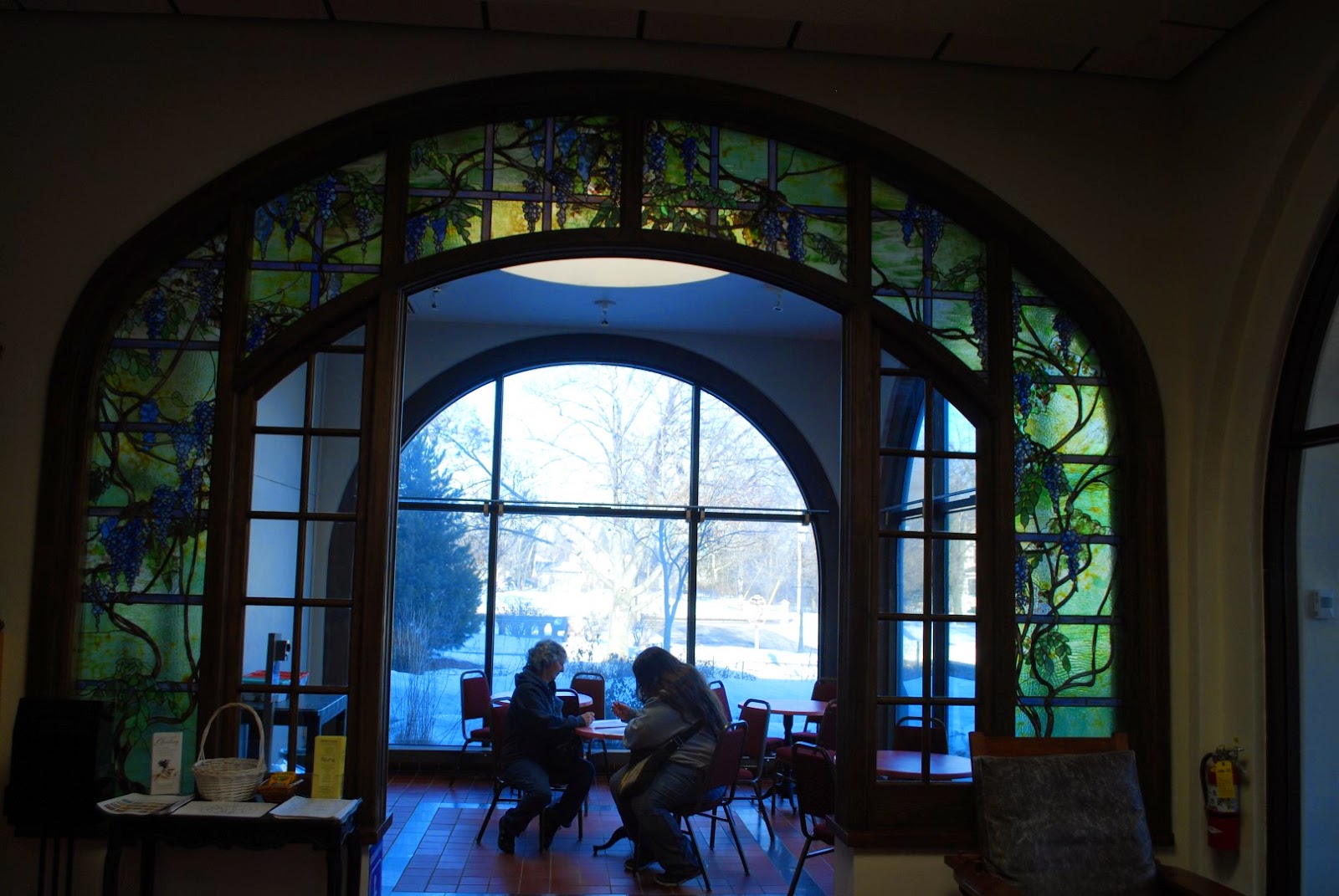 I love the way Tiffany's artists selected the glass for the wisteria clusters: 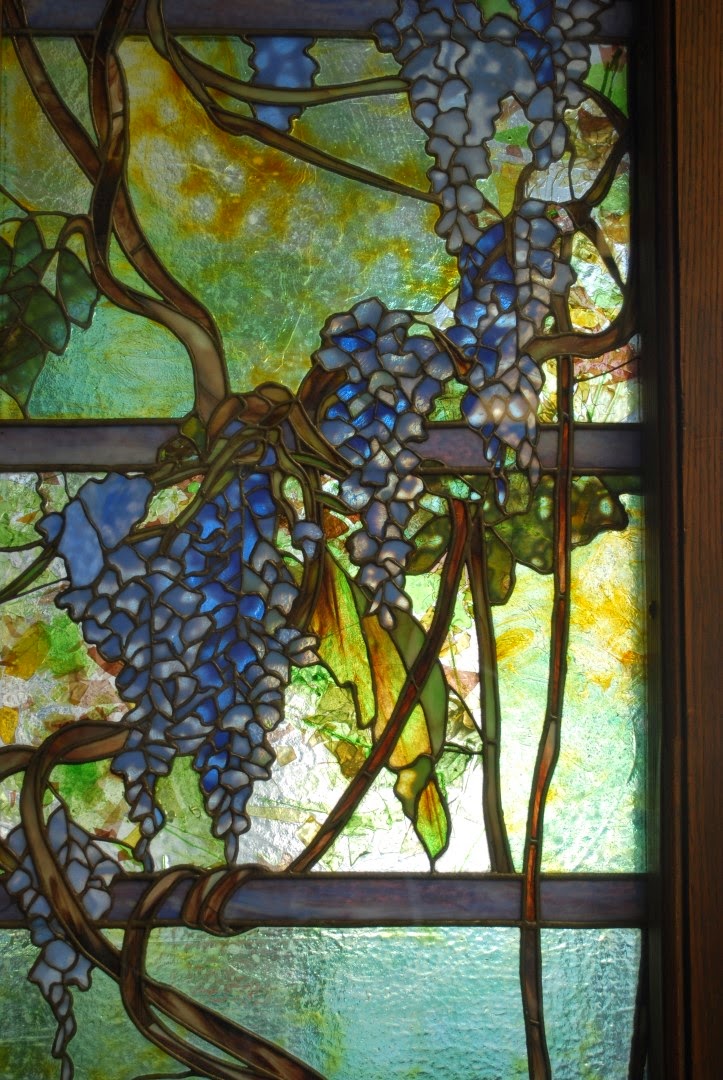 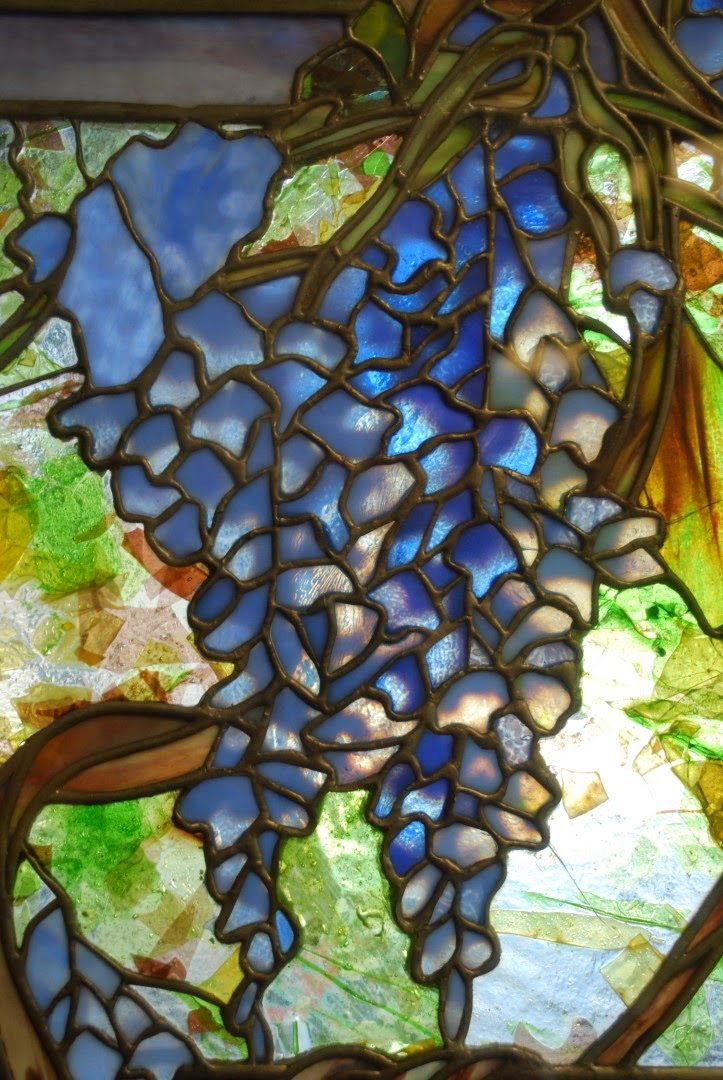 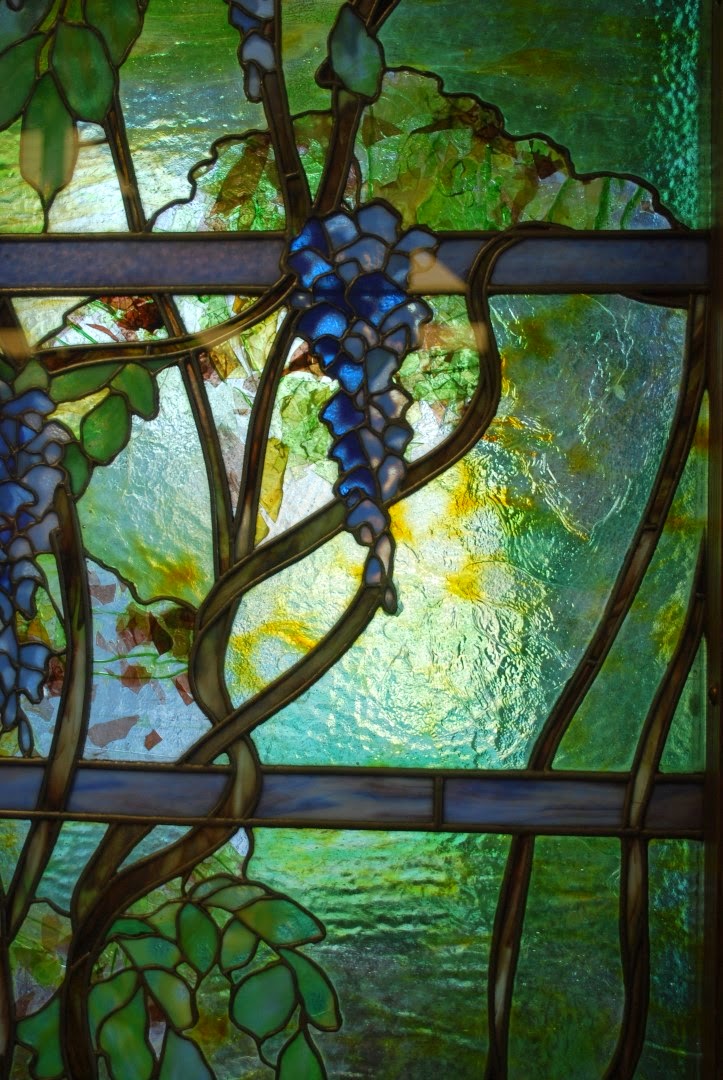 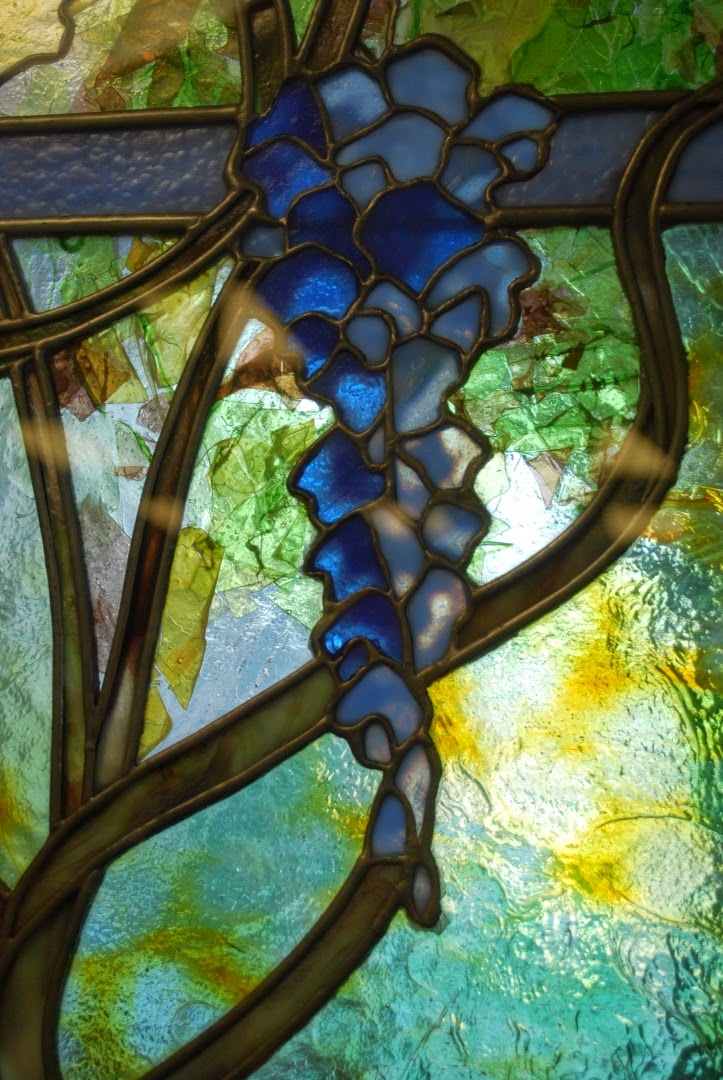 I would love to have an entrance like this to my home.  (If my home were bigger than the hut it is.) 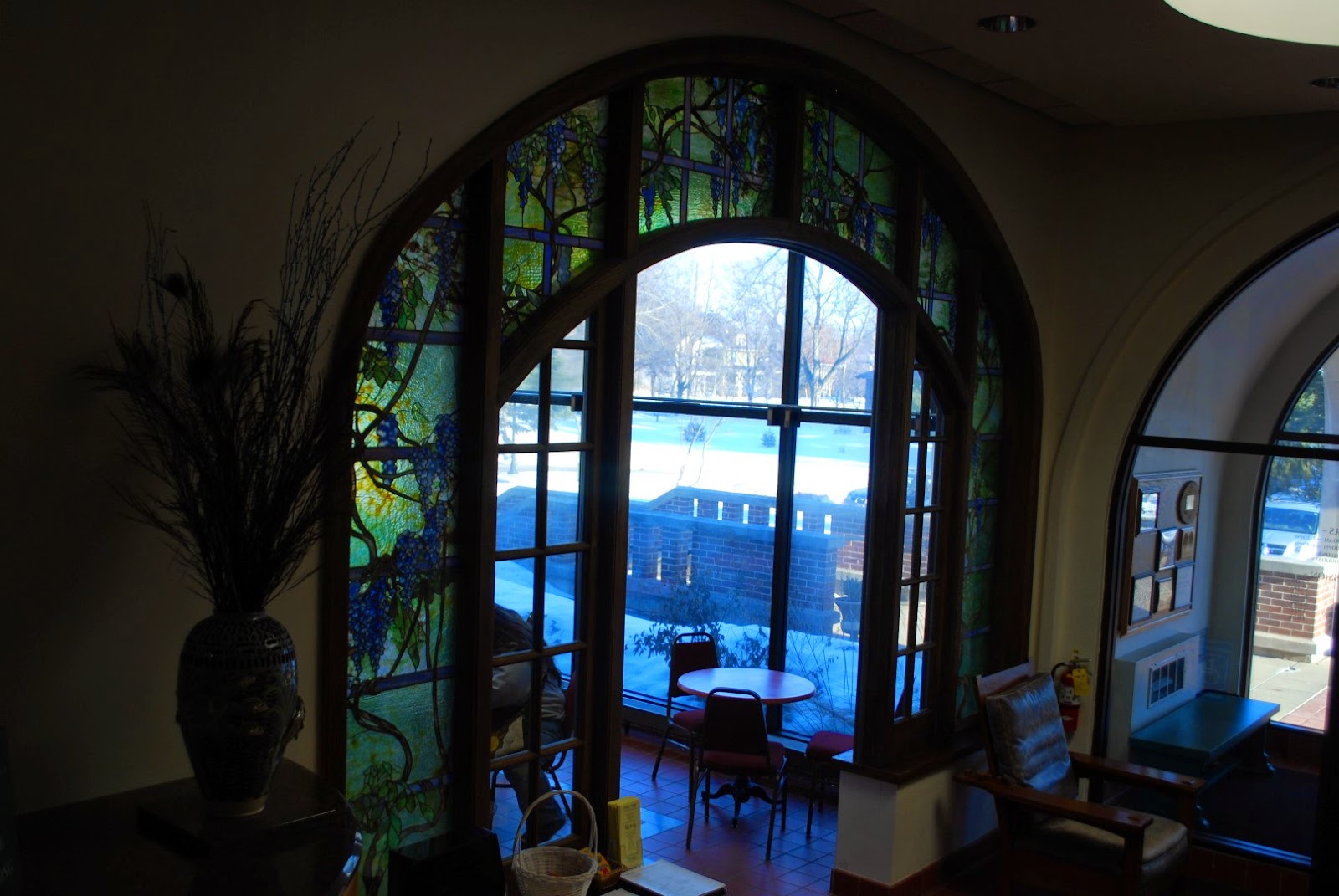 The other Tiffany window is at the head of the staircase in the mansion: 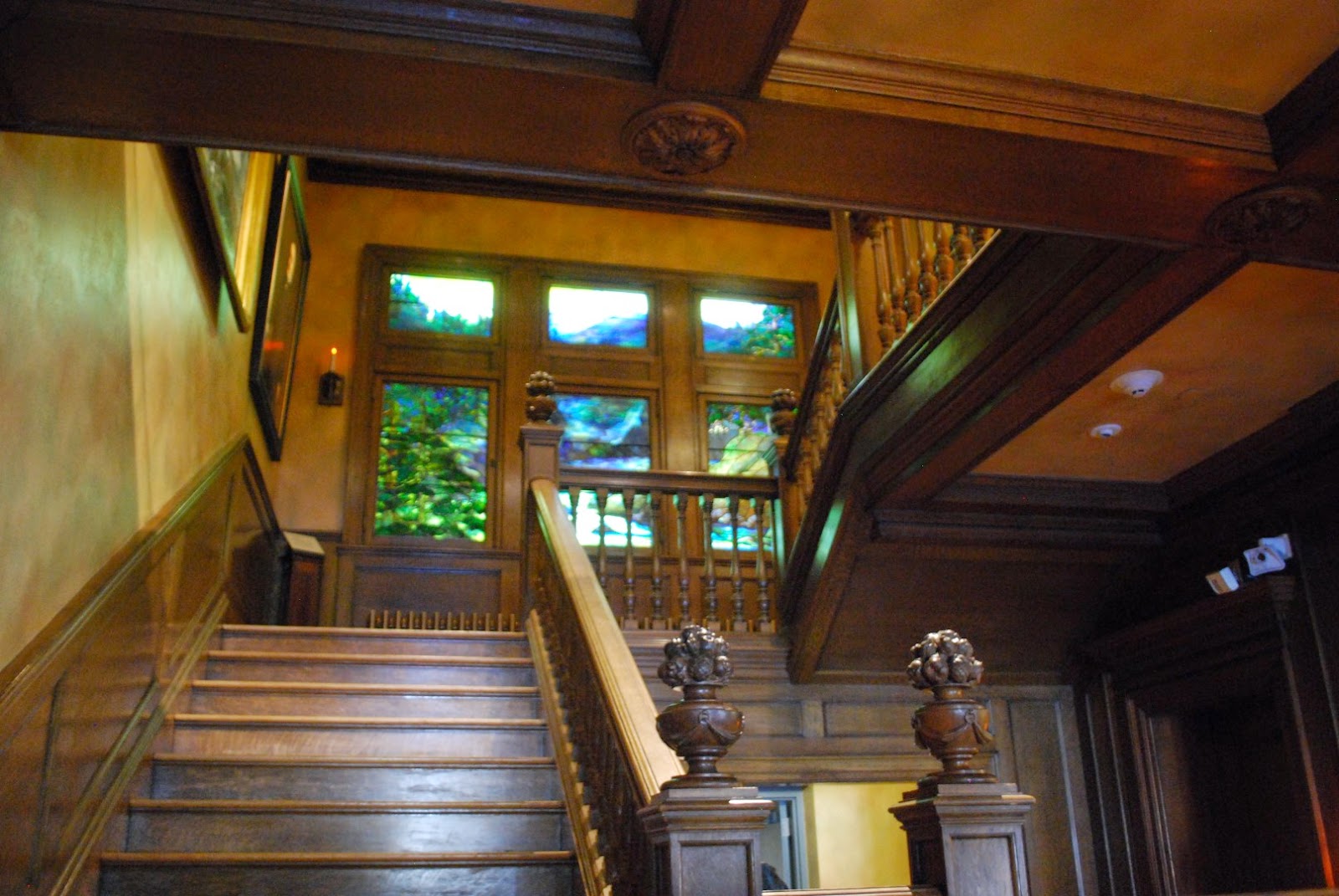 I vividly remember being all of eighteen years old the first time I saw this window.  I couldn't take my eyes off of it.  I also remember reading the 1994 news accounts of 'water rushing down the staircase like a massive waterfall' while the firefighters were trying to extinguish the flames in the third story.  I kept thinking of the stained glass and wondered if they would be able to save it.  Thankfully, they did. 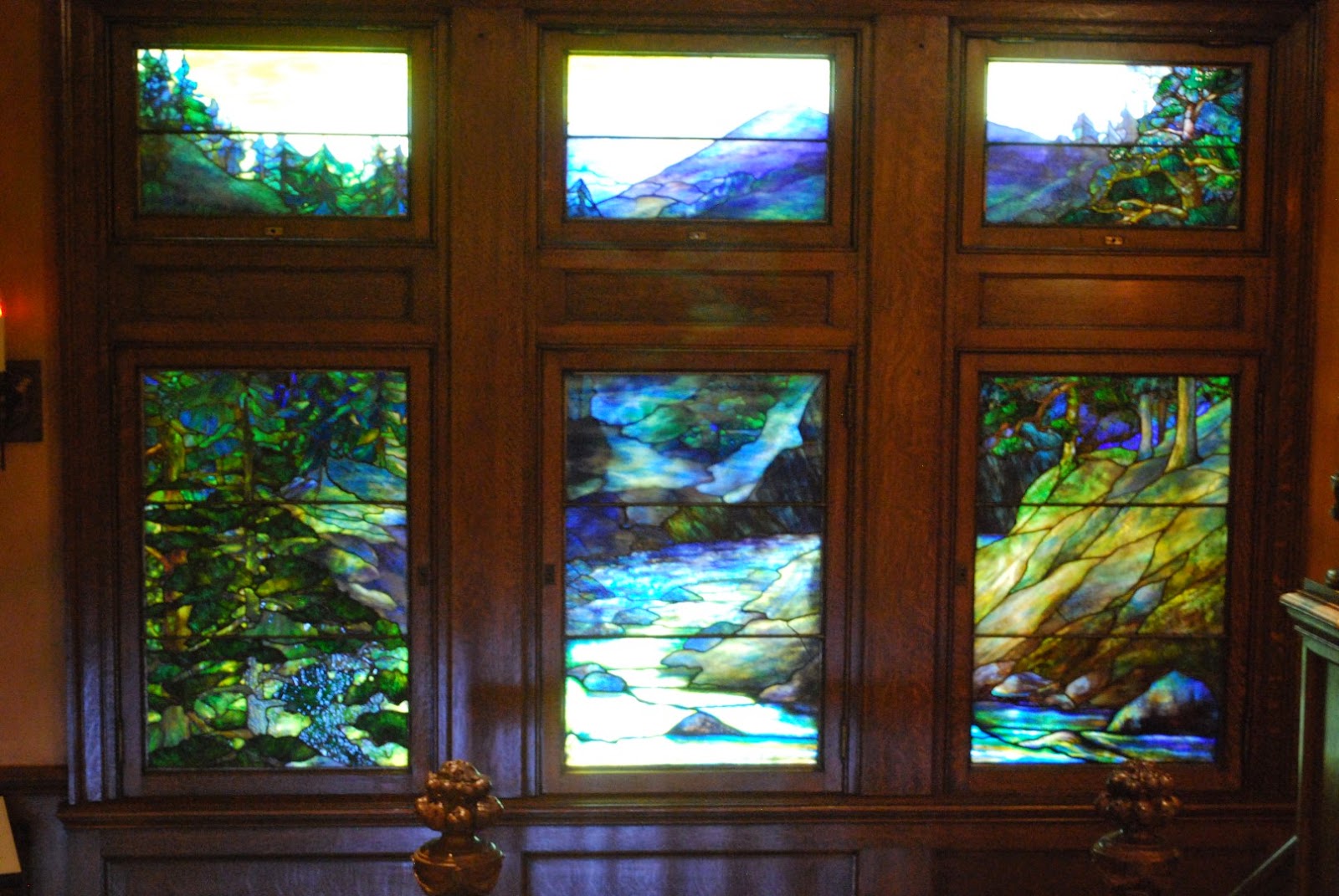 This gorgeous scene is massive; and the only place I could find to unobtrusively take photos was from the balcony on the second floor.  A return visit with a tripod is definitely in order. 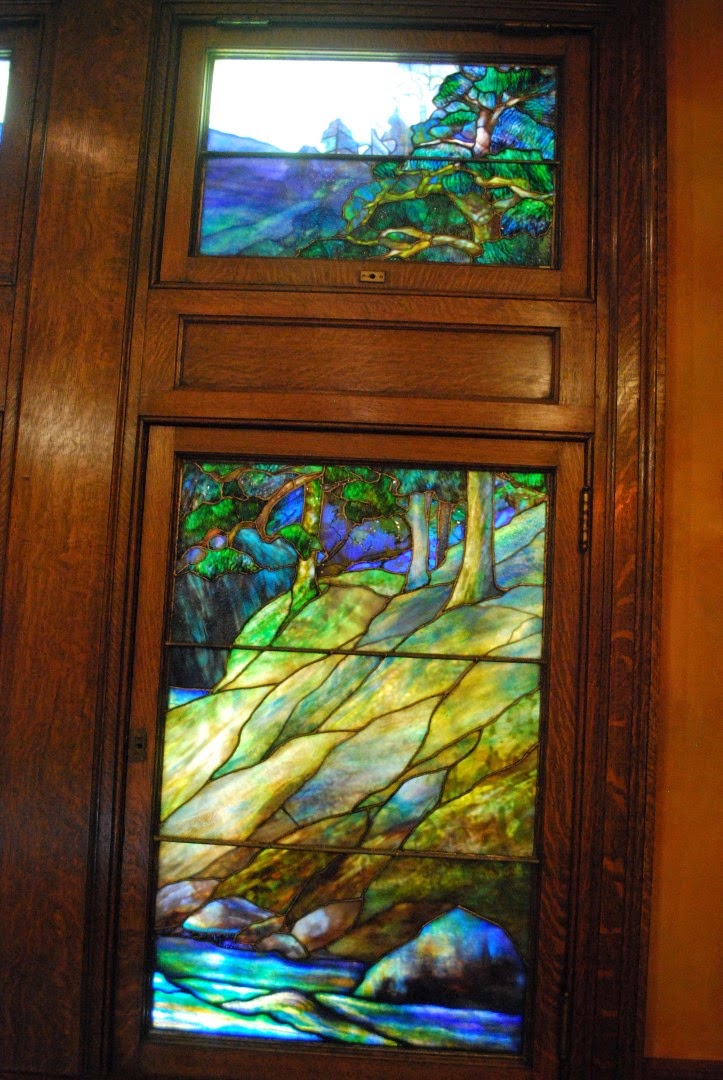 The artistry and shading in these windows is absolutely stunning.  And to think they were created over a century ago. 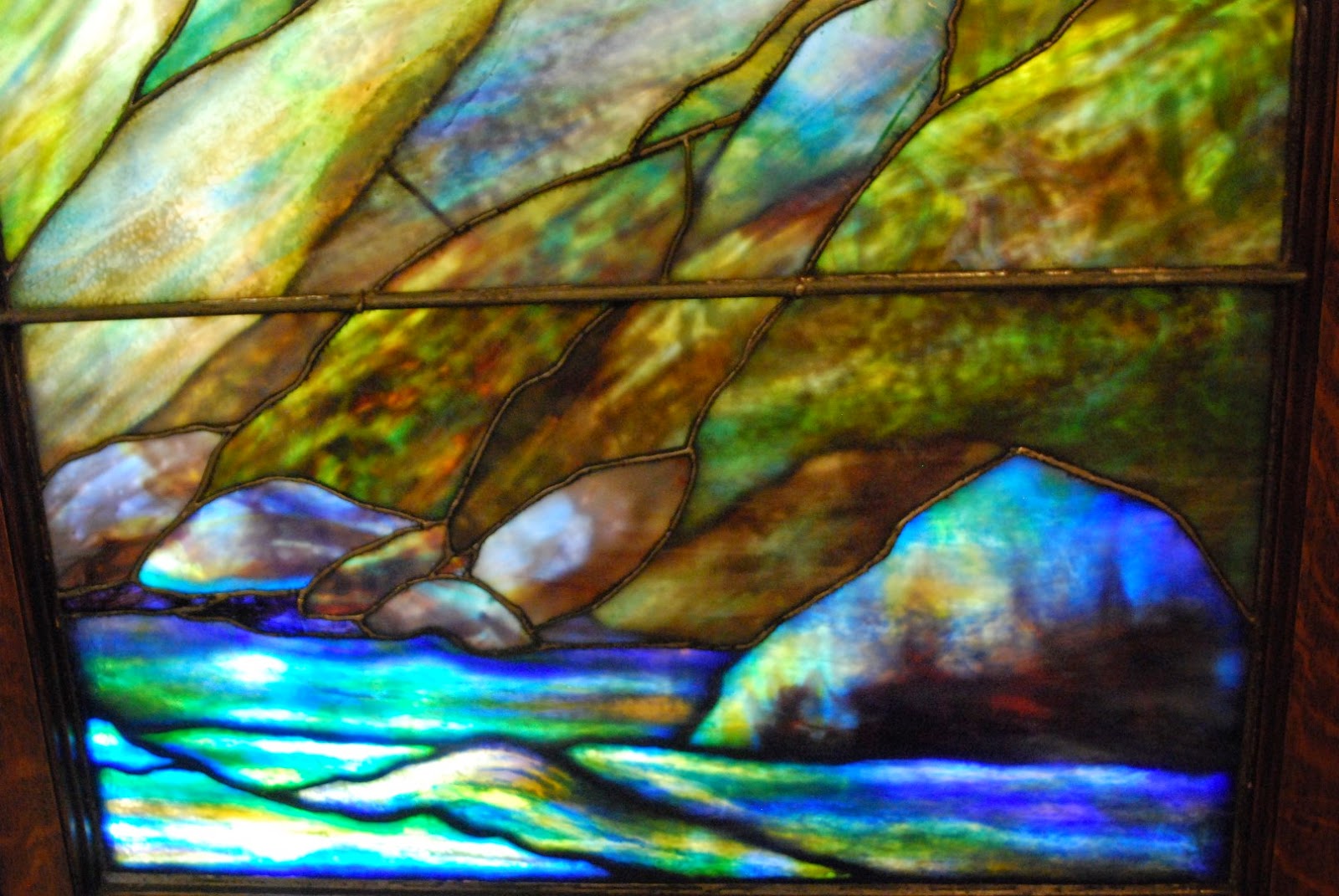 A close up of the rocks in the river, note all the layers of glass incorporated to define light. 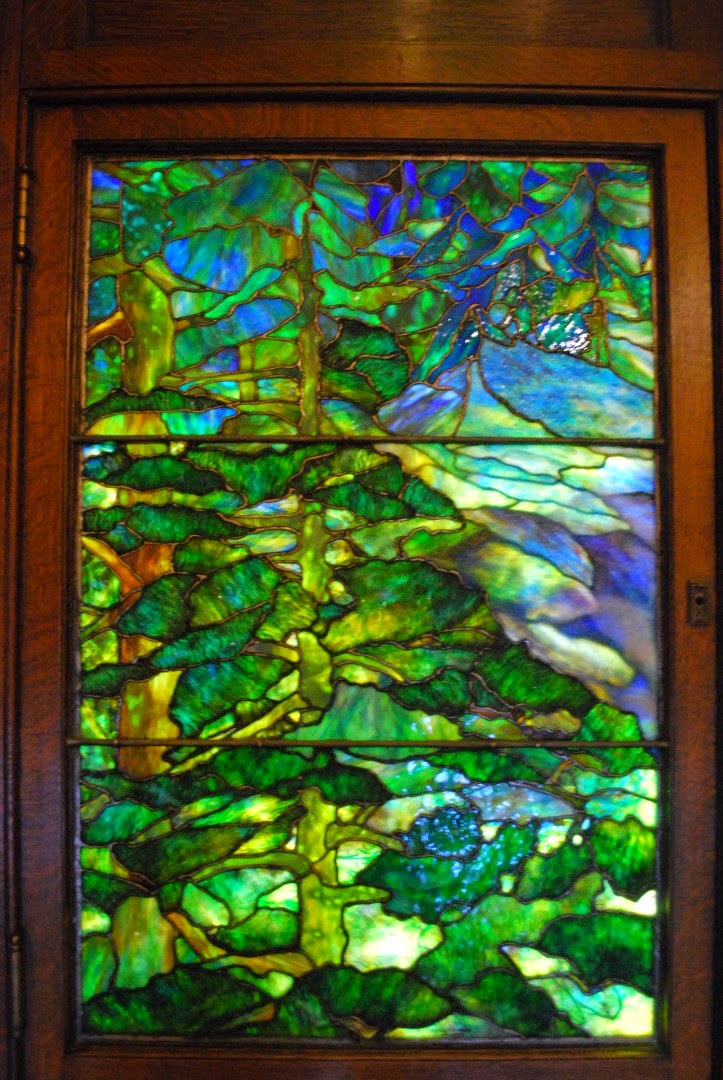 Another closeup of the trees, so many gorgeous shades of green in the pines. 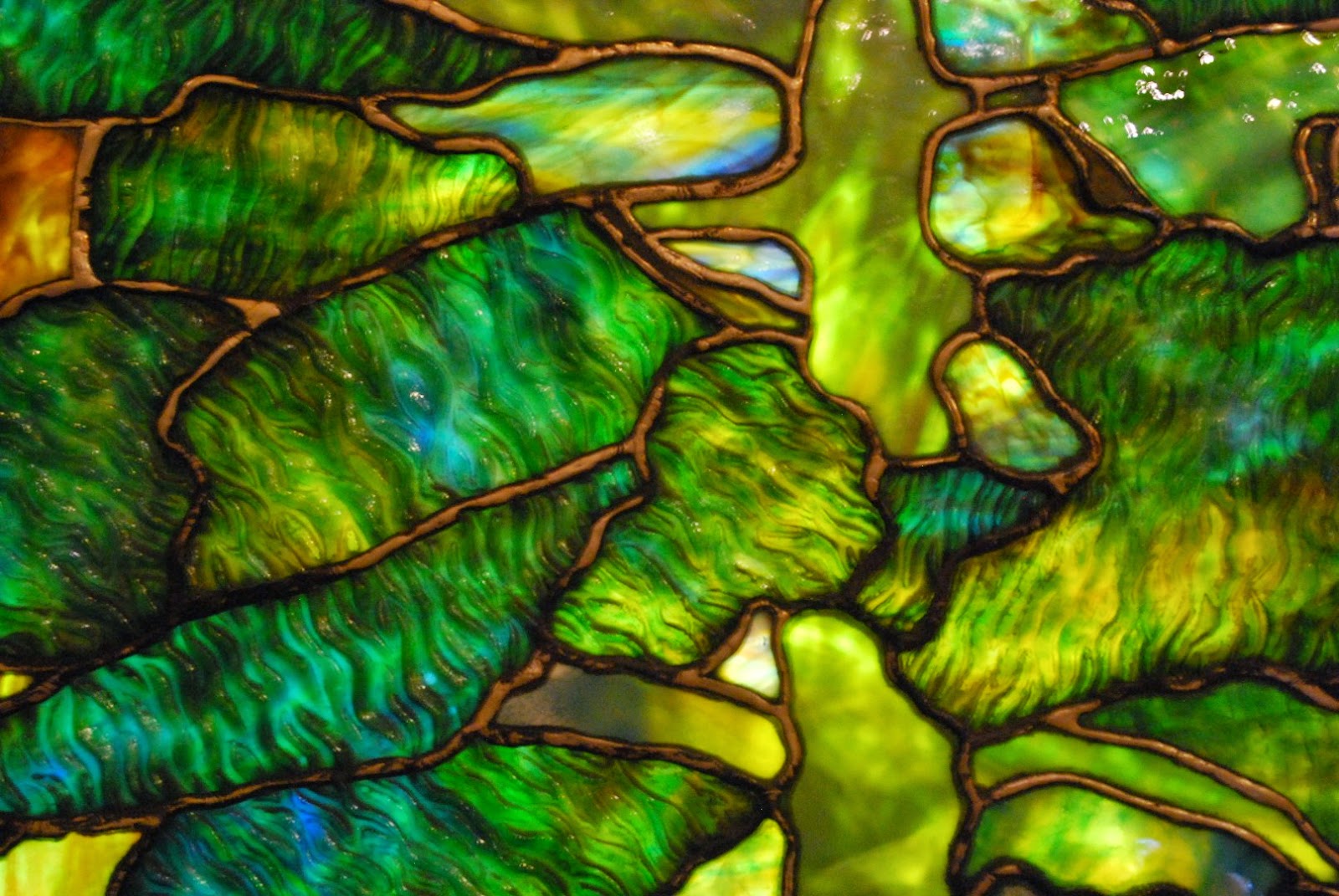 Ripple glass was used for texture along with plating. 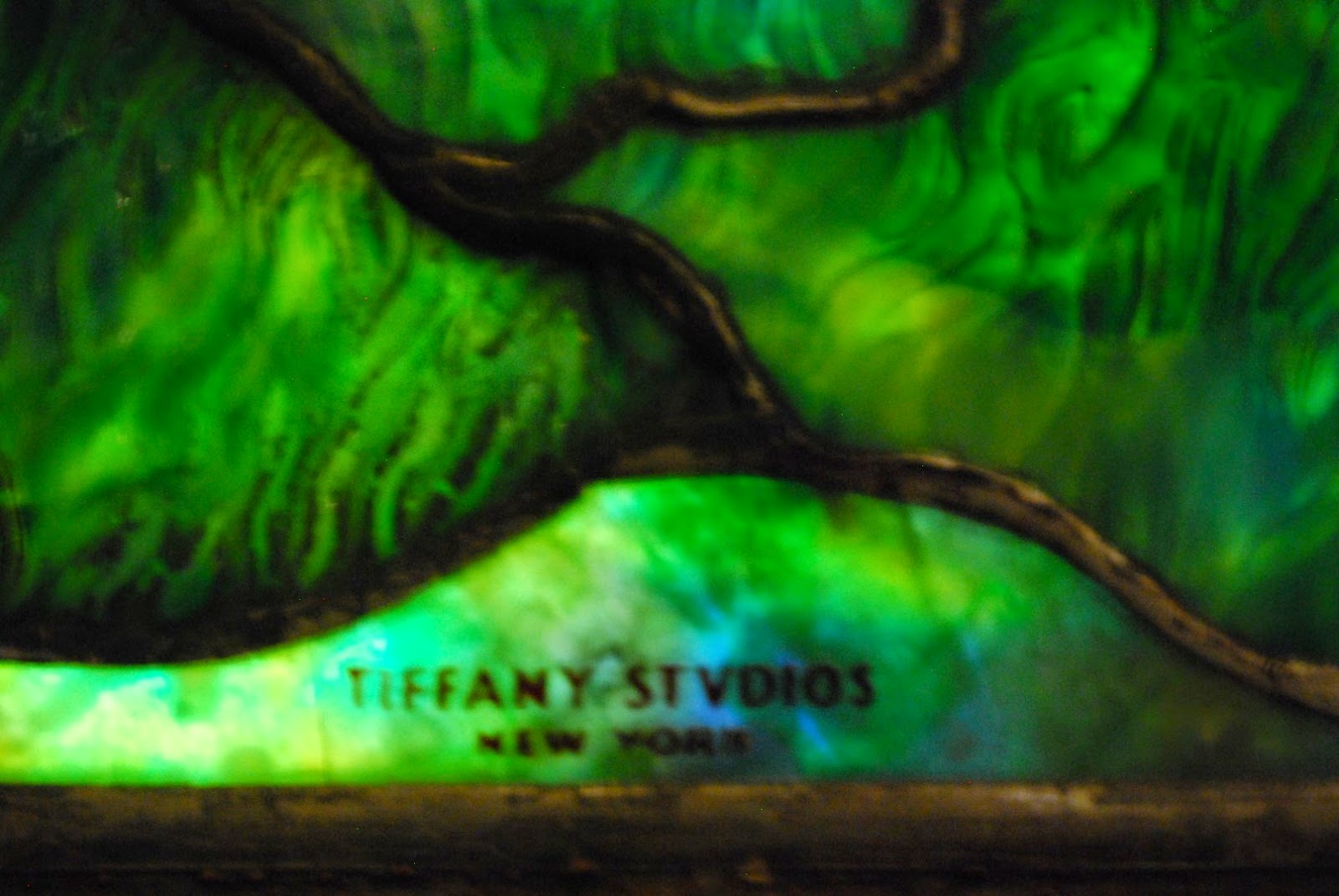 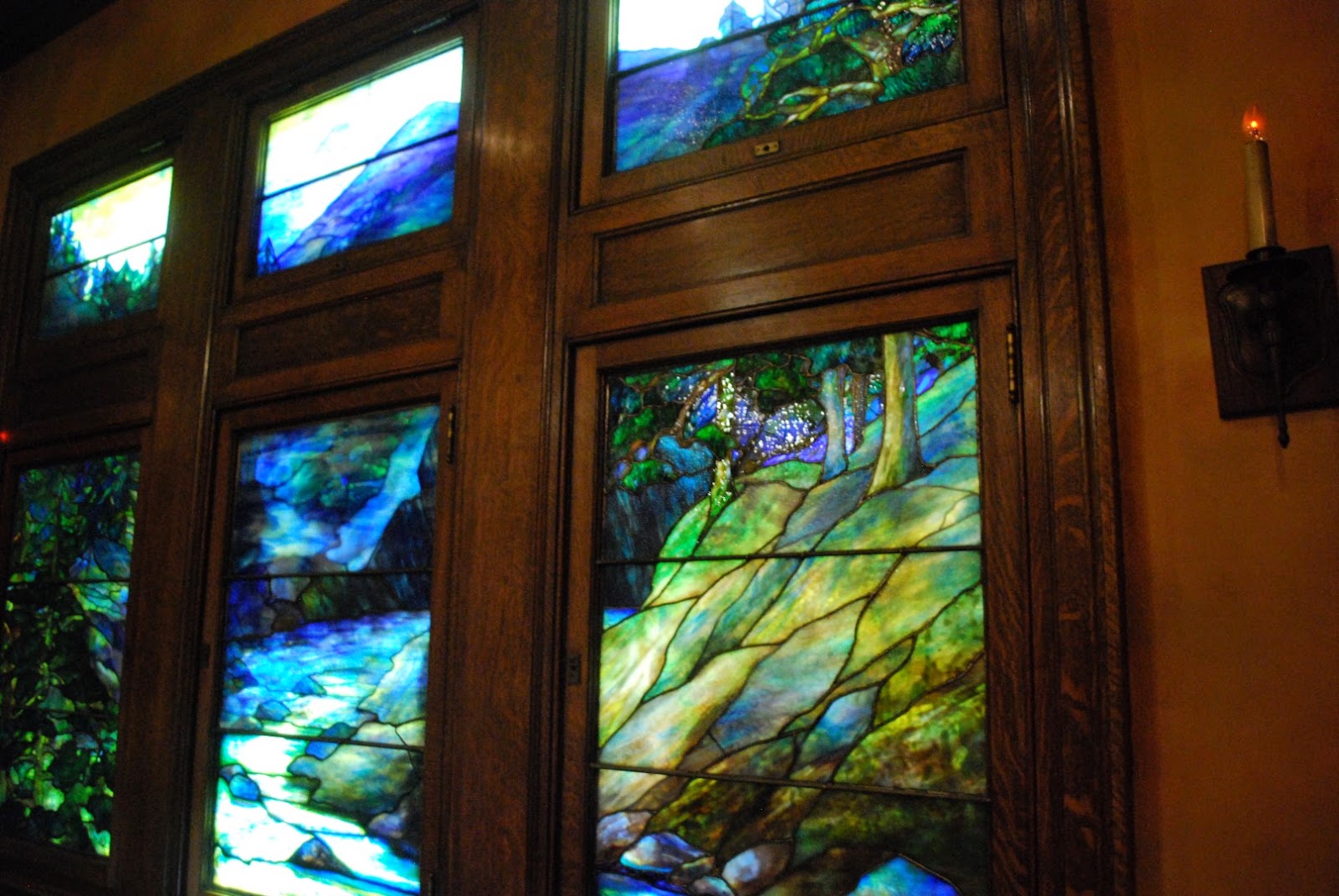 From any angle, the window is spectacular. 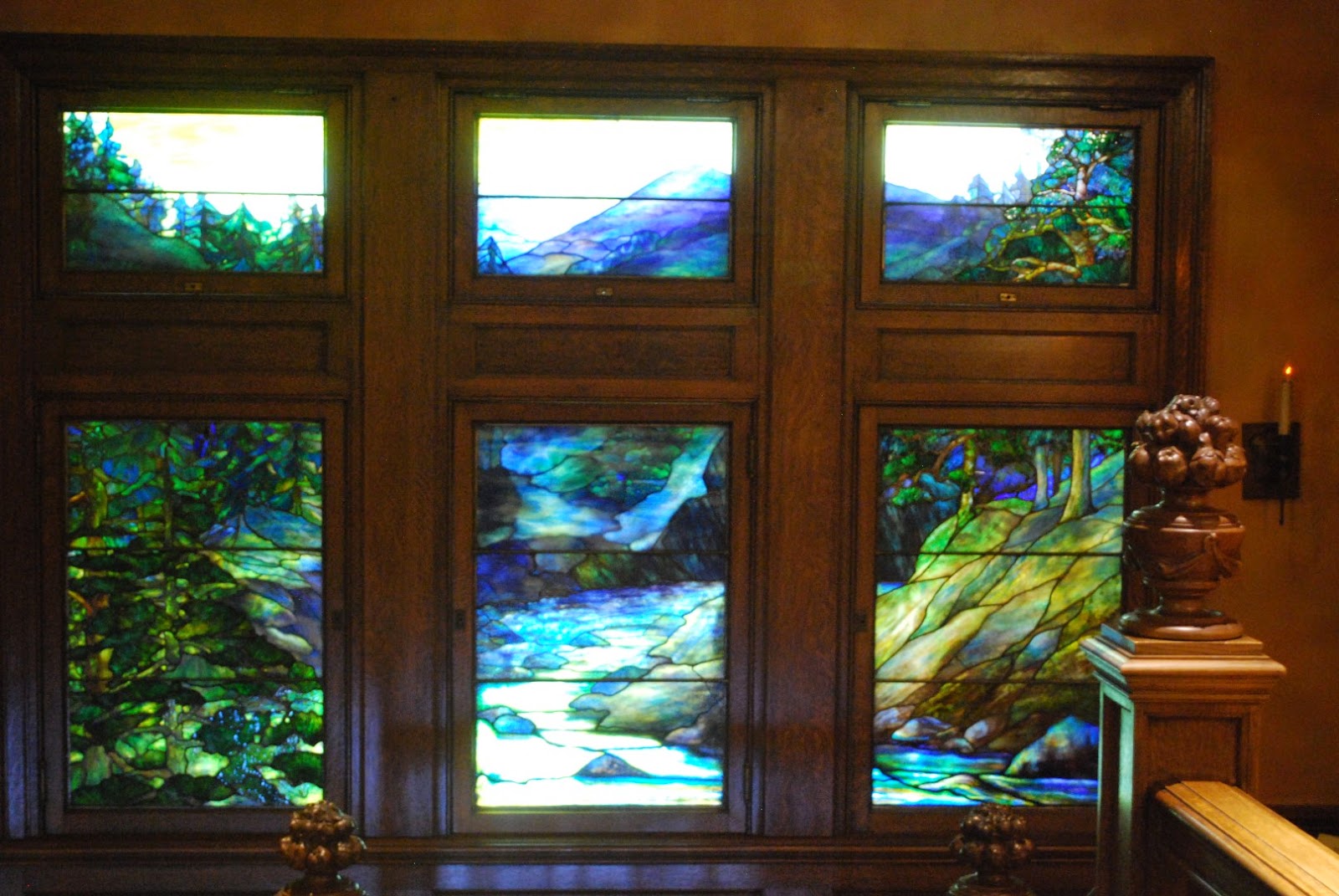 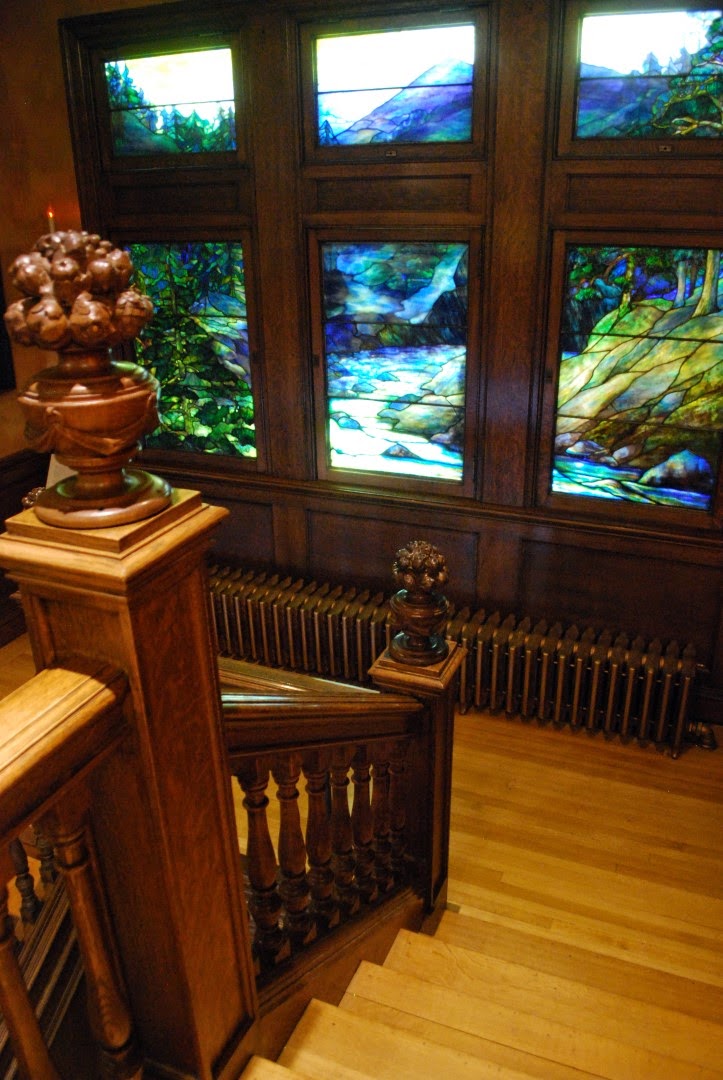 Coming down the steps from the second floor, I still cannot get over the thought of water cascading down these stairs. 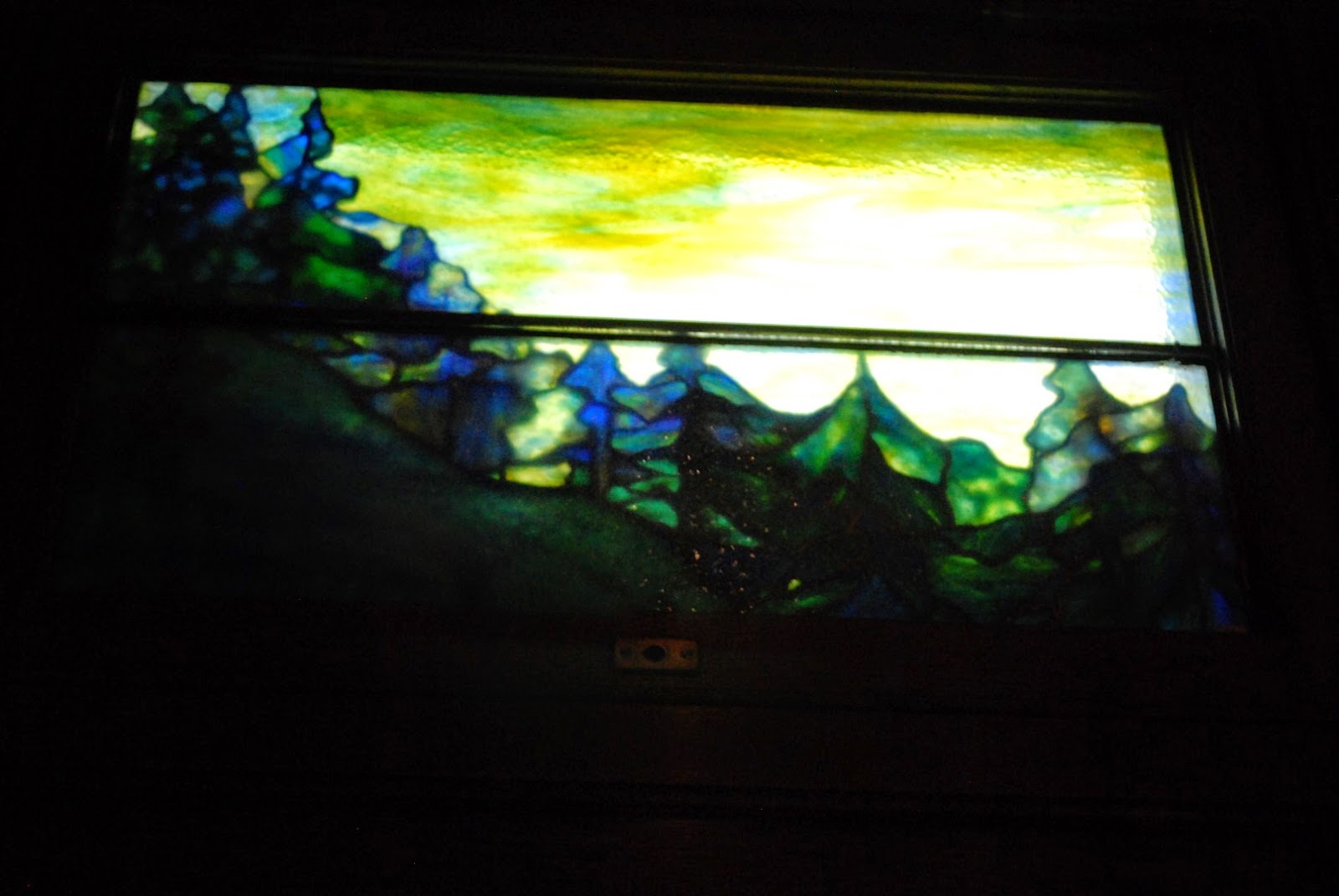 And also dear to our hearts, are Tiffany lamps.  This lamp is installed on the ceiling in the main entrance. 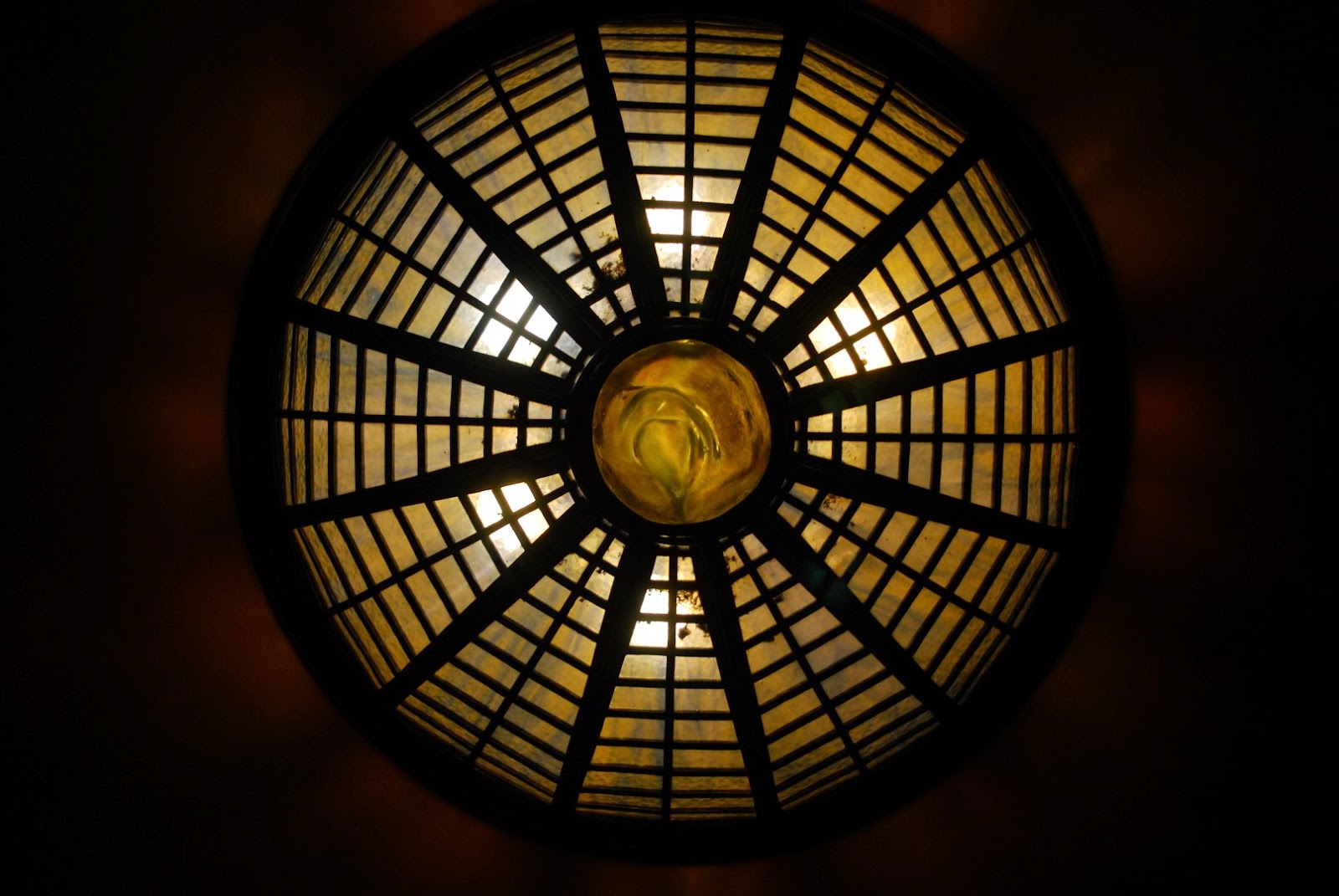 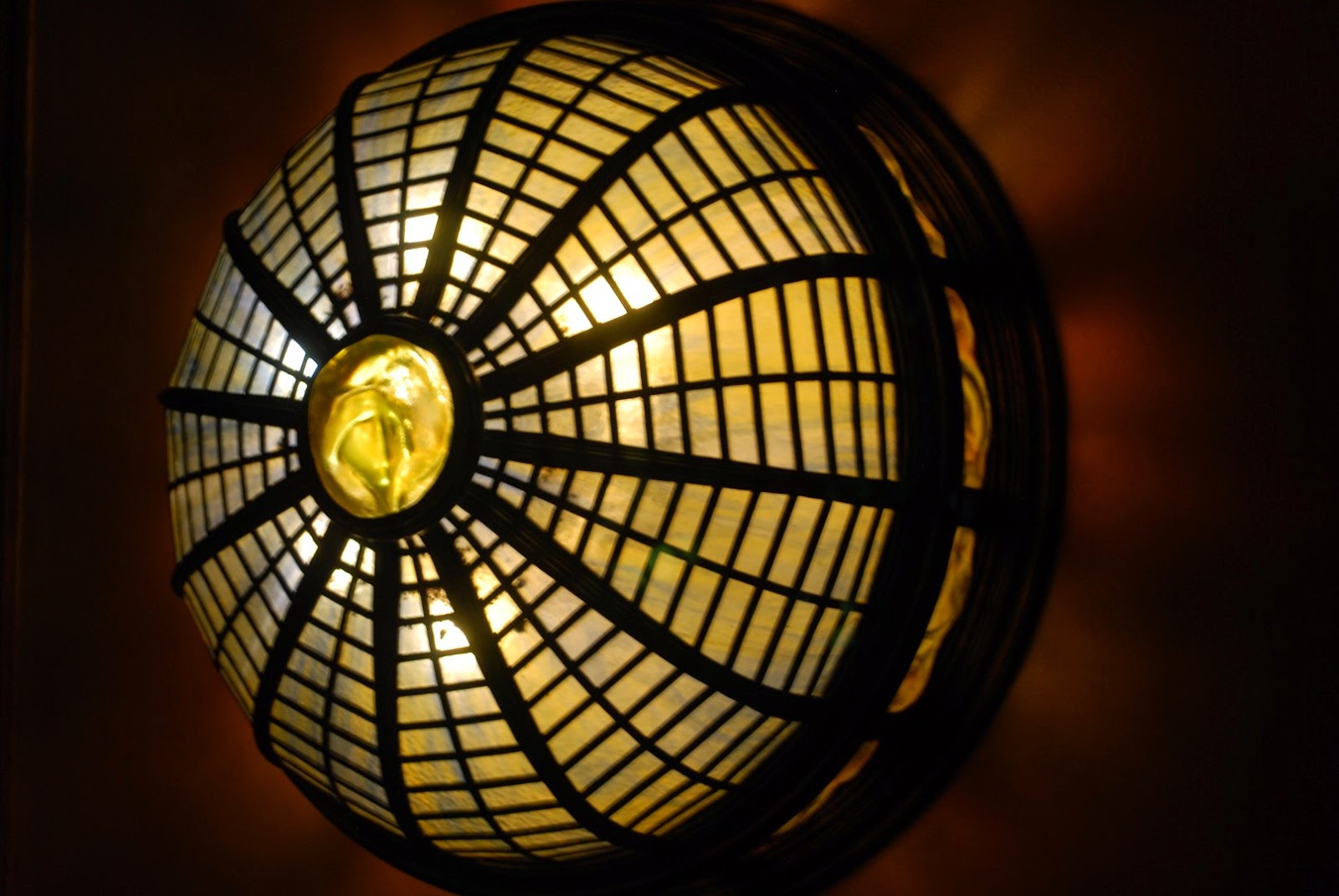 Touring this museum all those years ago was the inspiration for a lifelong passion in stained glass work.  I have to admit that back then, I never thought we'd be fortunate enough to dabble in the art.  Having the real Tiffany windows available for public viewing in the museum is such a privilege.  After seeing those masterpieces, we always come away inspired and humbled.

Time for us to get back to work on our own 'masterpieces', winter is short!