It Is What It Is

Six days into June already and things here are as hectic as ever.   We're in the midst of a rain shower right now, so I have a little time to write about the goings on here at the farm.

We finally got most of the pines pruned (or deformed, if you scrutinize my pom-pom pruning talents) last weekend.  Carl's sister Mary and her husband Tom stopped in for a visit on Memorial weekend and kindly helped us prune for a few hours on the two mugo pines by the formal garden entrance.

When that chore was finished, Carl and I moved on to ladders and the white pines down in the Quarry.  Mary and Tom visited with us while we worked.  Why did we let these trees get so tall?  Well, that was silly.  Our next gadget on the someday to buy list will be a three-legged tripod orchard ladder so we can reach the top of the pines.

The entire ordeal with the white pines was my bright idea; we just wanted to keep them smaller, more in scale with the garden.  Yes, buying a slower-growing tree would have been the intelligent thing to do, but we didn't know much about dwarf conifers back in 2001.  So, being broke and wanting trees to soften the stonework in the Quarry, we transplanted three pines from the Back Eight, plunked them in the garden and sentenced ourselves to a lifetime of pruning them every May.

Below is a crummy, out of focus, after sunset photo of one of the three trees we've been maiming for fourteen years. 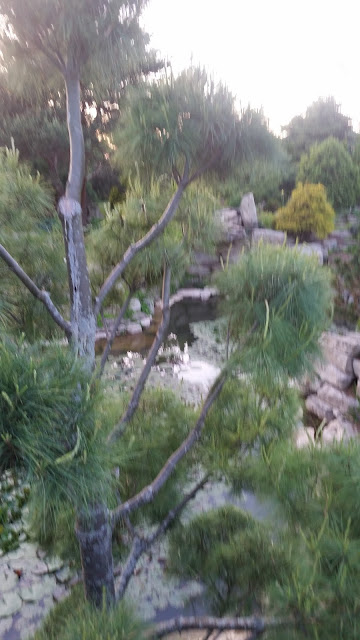 I don't know what I'm doing when it comes to pruning despite interwebs research on the subject.   A Niwaki pruning expert would run screaming from the garden at the sight of my ham-handedness.  I've read that Japanese gardeners usually serve seven year apprenticeships before they are deemed experienced enough to take over pruning in prominent gardens.

Seven years before they are allowed to touch a tree on their own.  Imagine the skill sets they must have by then.

We've been disfiguring the trees here for far longer, but still haven't learned much.  Carl has taken a much more studied approach to his tree; he has made cuts to guide the tree branches in the direction he wants them to go eventually.

We have had many disagreements over the best way to prune, and I'm sure in the end, Carl's tree will be far superior to my specimen.  I tend to go at the chore with a 'hmmmmmmm....let's see what we don't need' attitude and my end result is rather alarming, but at least it's not really noticeable unless someone points it out.  I've been adding stones tied to old washline and draping them over the branches I want to slowly bend over time.

In the famous words of (who said it first? I have no idea): 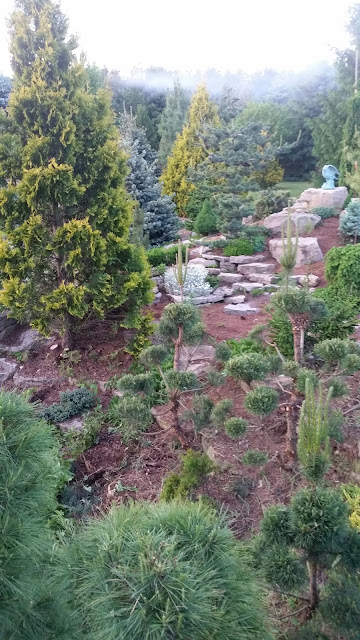 The view from the top, if you're good at Where's Waldo-esque searches, you may be able to spot the three Scotch pine victims of my Felco pruners turned into poodles.  I took this picture sitting on the top step of our 12' ladder at around 8:45 PM.   (Yes, I know you are not supposed to sit on the top step.)   The scotch pines are volunteer seedlings growing on the east side of the Quarry, so we're not out anything if they die from embarrassment of their haircuts. 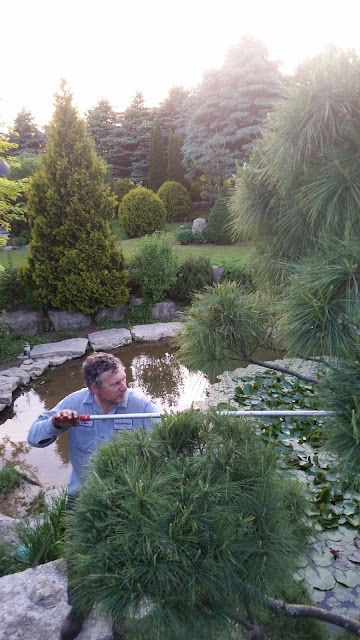 Carl and I took turns on and off the ladder and with various pole loppers and Felcos.  The trees still need more work, but the major candle push is over with for now.   Every year I'm amazed the trees survive our assault, especially the lowest pine in the Quarry which often sits in water for a few weeks in the spring.

The other onslaught this year on most Mugo and Scotch pines was the black headed pine sawfly.  I don't know how many of those gross worms we mushed this spring, ugh.  Far too many.  They're hard to see until you bump a branch and suddenly the 'needles' rear up their ugly heads.  What tipped me off was the dead foliage on some of the branches, on closer inspection there would be dozens of the caterpillars literally stripping the needles of last years' growth.  There's always something to spoil the fun. 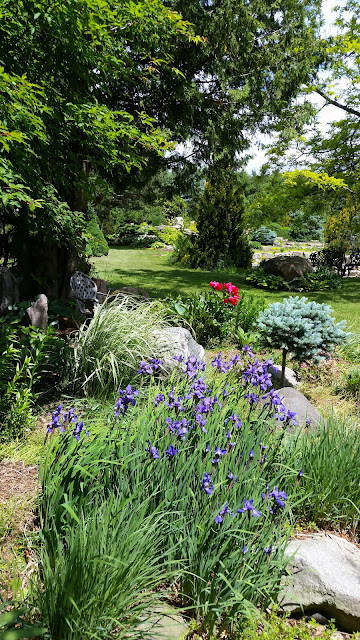 Well, the shower has passed over, so it's time to go back to work.  The annuals are calling my name.  Next week Wednesday is our first official garden walk of the year.   Grab a trowel, we've got work to do! 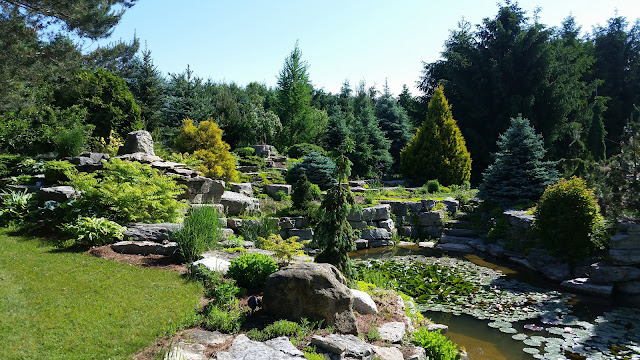 You work hard in the garden and it shows. that final photo is awesome. I love the pompom effect you have on those pines.

Thanks for the landscape shots to show an overview of the various areas. It's looking great! I chuckled all the way through this post. Be careful on that ladder!

I always enjoy your sense of humor and love seeing the different shots of your wonderful gardens.

Love and hugs to you and Carl ~ FlowerLady