On Saturday, October 5, Mother Nature doused us with more rain, so Carl had to abandon the porch pillars and work inside on the upstairs staircase.

When our house was originally built, the steps going upstairs weren't laid out right.  There was an awkward landing halfway up which shortened up the headroom on the ceiling.  I'm 5' 8" tall and had no problem with hitting my head going up or down the stairs, but anyone over six feet tall had to duck. 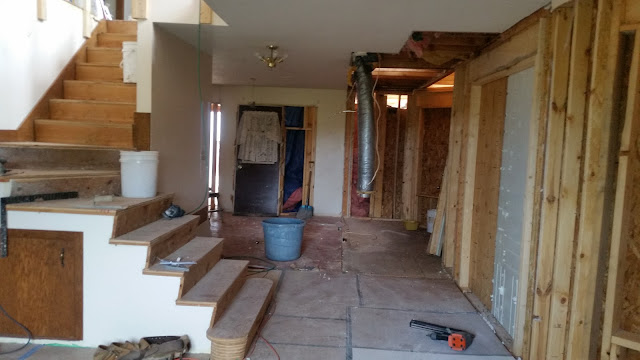 I remember seeing teenage Joel and Dave come thundering down the staircase and always ducking sideways on the fifth step from the bottom to avoid a collision.

Our builder said that the old staircase wouldn't meet code, so the solution he offered was to open up the ceiling so there would be more headroom.  Carl wasn't a fan of the idea; his suggestion was for the staircase to be rebuilt but the builder said it was more than he cared to take on.

So, since it was raining, Carl started the process of dismantling the upstairs staircase.  Of course he wasn't on his own with this big job, our granddaughter, Audrey, age three, stepped up to lend him a hand.

Carl had to carefully cut the staircase in two and resize the treads.  When he was done, the staircase ended up nine inches shorter than before eliminating one step. 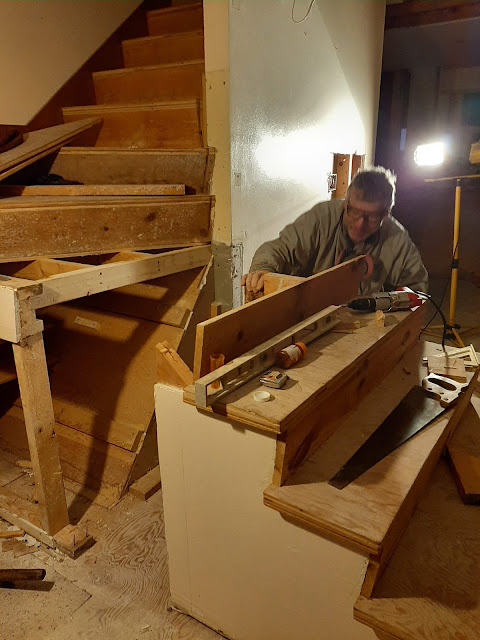 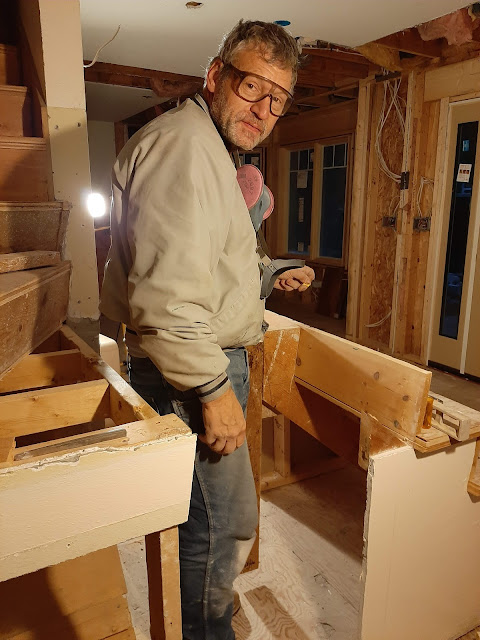 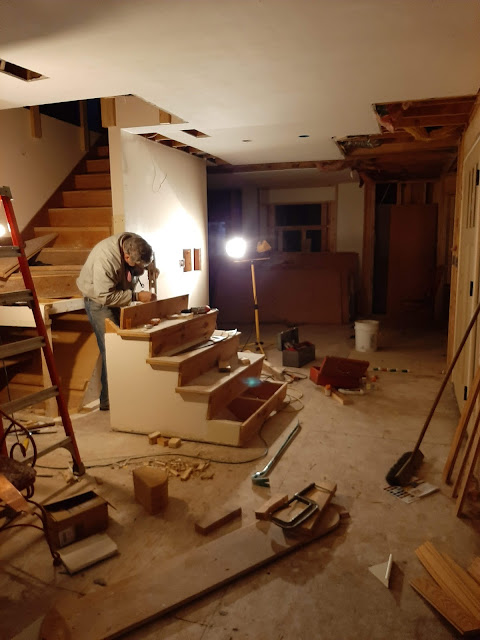 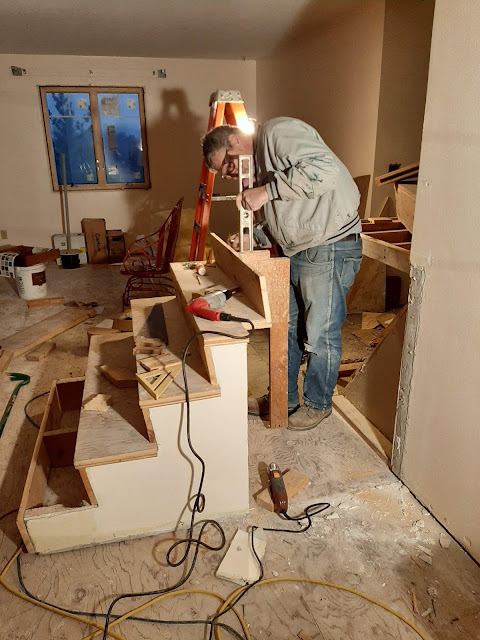 Twelve hours later, and we had a new staircase. 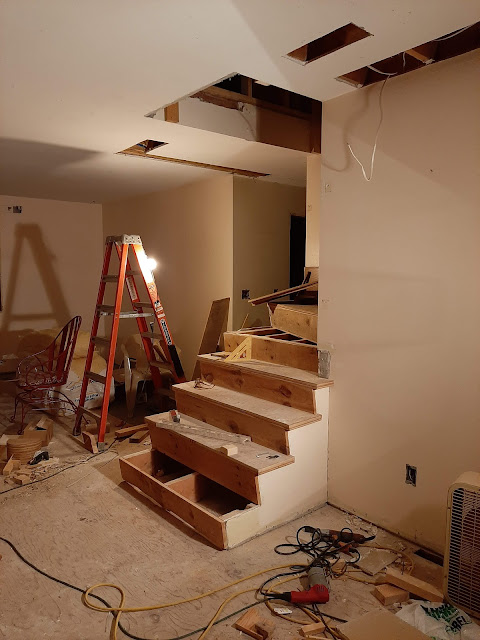 By removing the landing, we gained nine inches of space in the living room.  The only scary part was when Joel came to visit a few days later and lost his balance coming down the steps.  He was so used to the old stair arrangement that he forgot and when he reached up to grab for the ceiling (which was also moved) he almost fell forward.  Luckily, he's young and resilient and regained his equilibrium.

The next day, Sunday, October 6, finally saw clear skies.  On Tuesday, October 8, the insulation crew was coming to spray foam the hut so we had the weekend to remove the siding and old insulation from the west side of the house.  Sweat equity again, trying to keep costs lower. 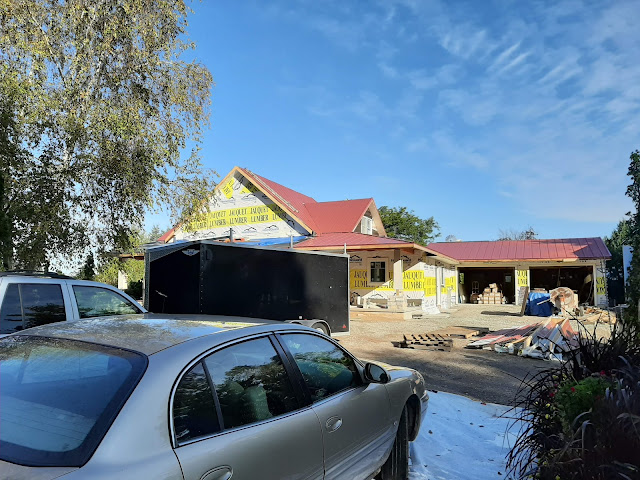 The electrician came out on Sunday morning (trying to catch up on his work) and Carl put up some blocks in the upstairs ceiling for him to install the future lights and ceiling fan. 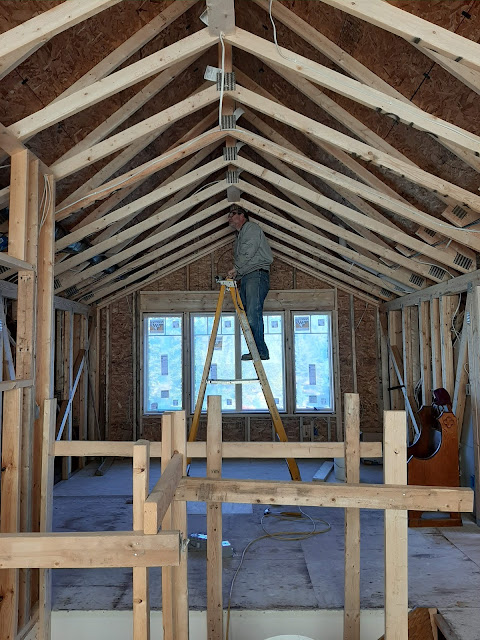 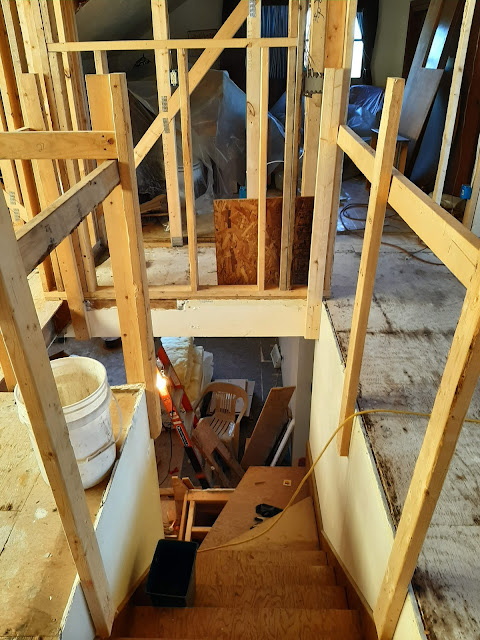 Just be careful on the missing step, ok?  (It's fixed now.) 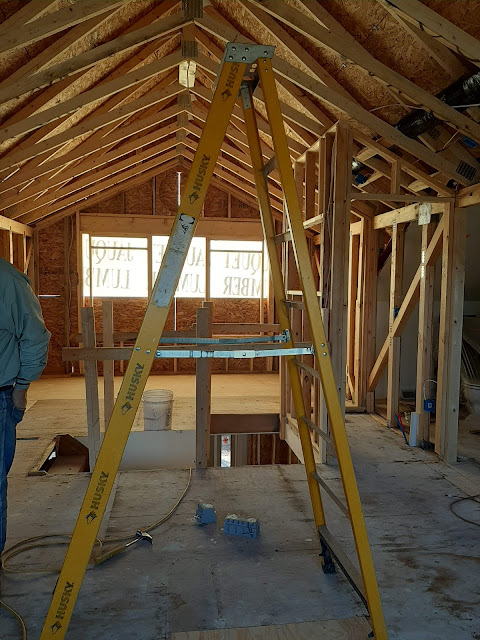 After the electrician left, Carl went back to work on the stone pillars.   Joel and I tackled the siding removal until noon.  Joel was tearing the siding off on the ladder and I was working on the lower siding beneath him.  Asian beetle carcasses from decades ago were raining down on me.  I wonder what the R-factor (insulation lingo) was with all the bugs?) 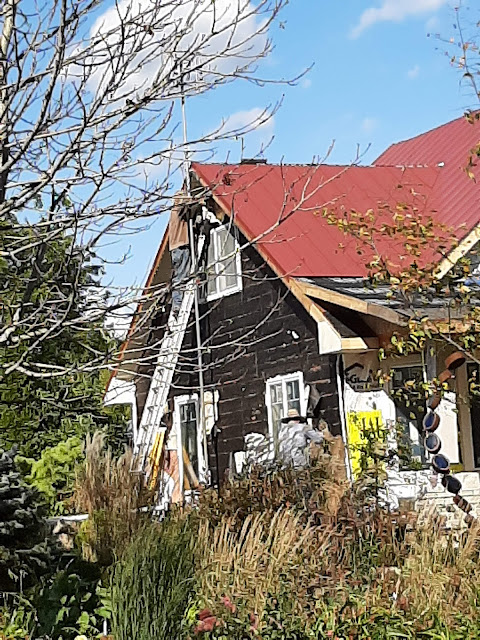 In the afternoon, Cody came to help Joel on the ladders, so I went to work picking up all the siding and insulation as they tore it off. 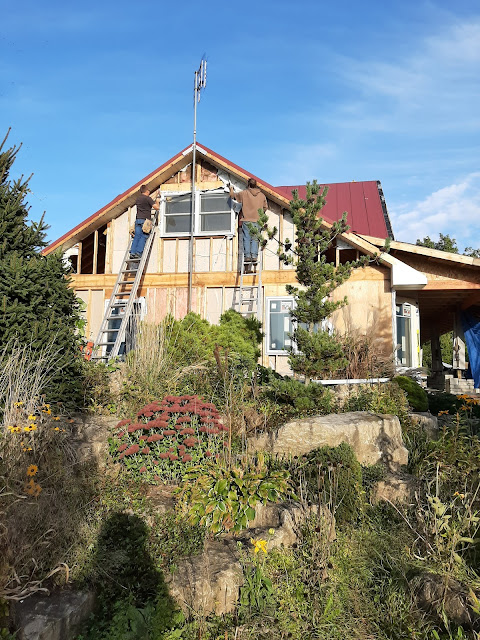 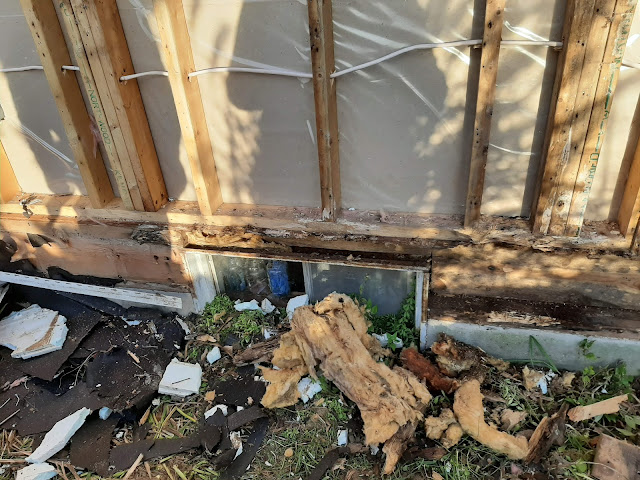 I lost track of my trips to the dumpster but I vividly recall the itchy and scratchy pink insulation.  That was one job I was very glad to be done with. 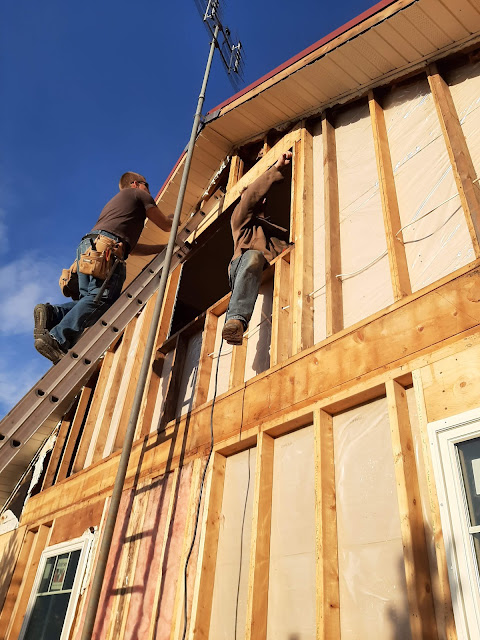 Ah, to be young and super-flexible again! 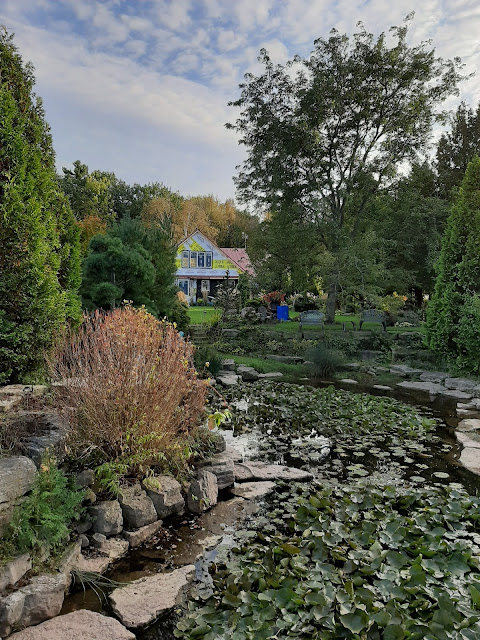 Another weekend over with, and little did we know the warm weather was getting over with too. 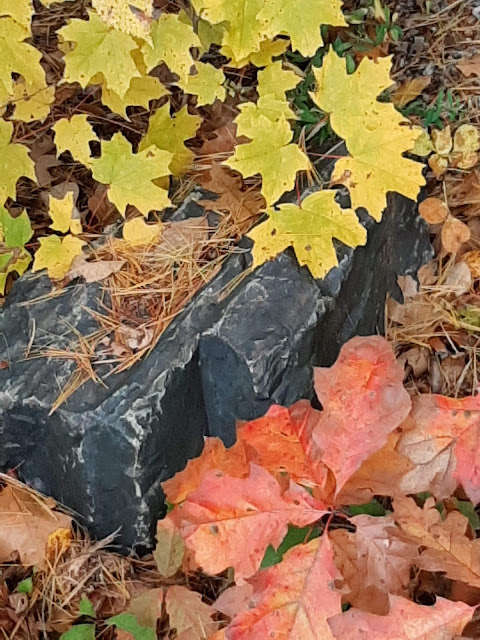 I love that long shot of the house, second to last photo. Even at this stage of the remodel, it shows what a good decision the roof color was. Carl is so handy, I'm impressed with the stairs job he did. I suppose you'll add railings eventually.

Thank you, Chavliness. Yes to the railings, and Carl has to build them. The red roof is definitely growing on me, ha. :-)