Another day, another adventure 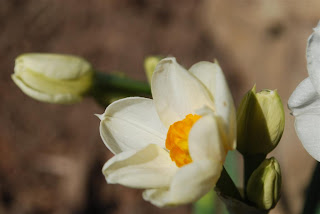 I have to report another GADS day, maybe not as severe as yesterday, but still pretty dysfunctional!  I'm feeling much better now, the swelling on my shin has gone down to a mere bump, but the bruises are pretty impressive.  Hey, I was lucky this time, no casts to deal with!  I broke my right wrist several years ago doing some acrobatics on the stone steps leading into a hosta bed when I slipped on the last patch of  ice left in Wisconsin that year.  It was a teeny, tiny, minuscule patch of ice, but I managed to fall quite theatrically, with much flailing of the appendages.    I tried to stick my landing by throwing out my arm to catch myself.  (Note: Not a Good Idea)  Despite my fantastic performance, the judges only awarded me a 4.  I was so disappointed...and I really, REALLY disliked wearing a cast for eight weeks.)  I vowed to be more cautious in the future, and I will be.  I promise. 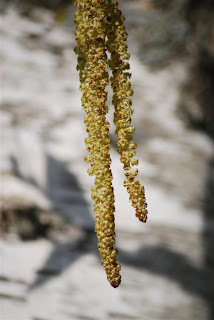 The birch trees are starting to bloom and leaf out.  I find the new leaves to be so pretty. 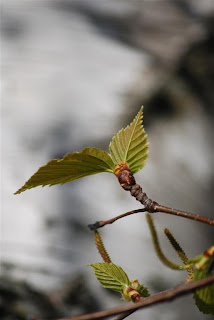 This morning I had to drive to Luxemburg to pick up a half of beef we ordered totalling 305 pounds.  I took Mom with me for the ride and also met Ben, the owner of the beef, who rode with us to the meat packing plant.  We had a very nice trip (about 40 miles one way) and after we dropped Ben off at home, Mom and I took a little ride down memory lane and drove by what used to be the home of my parents' best friends.  Bert and Bea are no longer with us, but their cute little home is still standing and I think Mom was happy to see the place.

After we got back to our little town, I stopped off at a lawn and garden store to get starter parts for the little Dixon mower.  I had the parts needing replacement in my possession, so there could be no question about what I needed.  I always dread buying parts uninformed, 'Yeah, I need the little spring-thing that sits next to the do-hickey.'   Go into any engine parts store with that line and they know you are a rookie, let me tell ya.  I thought I had all the serial numbers we needed, but alas, no.  (I even had the cover off the motor, oh, yeah, I was prepared.)

I walked up to the service desk, put the decrepit parts down and declared to the clerk, "I think I needs me a new pair of these."

Now why that well-put-together sentence, delivered in a bizarre accent came out of my head is beyond me...must be the GADS. I swear, I sounded like a dusty cowpoke coming into a saloon after a hard day's work poking cows.   Despite my attempt at 'humor', he wasn't greatly amused, though he agreed I needed new parts, all right.  (And probably, a psychiatrist.)


"When he took this part off, what was above it?" the clerk asked me.   "Was there a c-clip or was there a pin he had to knock out?  Was the gear aluminum or nylon?  I have to know which type he had, or I can't order the right part."

I stood at the parts desk trying to look intelligent, which was pretty difficult after my opening speech.  I dutifully scanned the schematic breakdown he showed me on his computer.

He shook his head and informed me I was looking at a totally different motor.  Ooops.   "I think I'll call Carl; he's on his lunch hour now."

Carl does not keep his cellphone on when he's working and can only be reached at 12:20PM, which is a mystery to all of us, but one of Carl's Rules.  I went back out to the car and waited with Mom for ten minutes and when I finally spoke with Carl, I could then march back into the store and declare with conviction, "He had to remove a C-clip."

We headed for home.  Mom helped me pack the frozen beef into the freezer and I spent the rest of the afternoon moving the last of the Albomarginata hostas from in front of the house to the wall north of the barn to the area we moved the George Peabody cedars to on Sunday.  When Carl came home, we worked together at digging the big plants, which was much easier.  It took us about 2 1/2 hours to dig and transplant around 30 hostas, and it will remain to be seen if the hostas will keep their own weeds down. 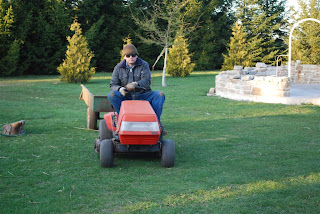 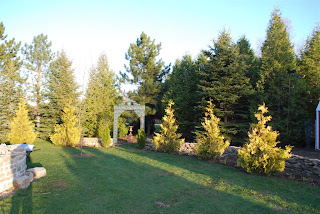 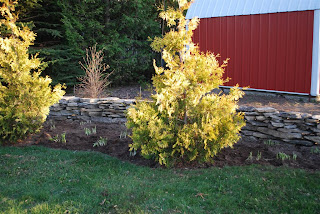 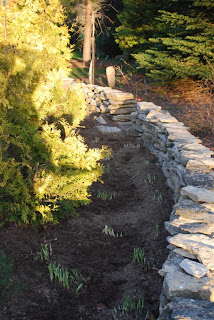 After supper (steak on the grill) Carl went up to get the trailer from Mom's because he has to take it into town tomorrow to pick up our living room floor lumber.  The red oak came in earlier than we thought it would.  We'll let it sit a week or two to acclimate to the house before installation.

The trailer still had the lawnmower on it since I didn't get the parts today to fix it.  When Carl stopped to back in to our driveway, the lawnmower slipped it's strap and came forward on the trailer, rolling completely off and straddling the pole.  It sounded awful, but luckily, there was no damage done.  Joel ran out and helped Carl roll it into the driveway.

Enough excitement for one night.