All righty then, here I am, back with what's been going on around here since April.  Well, scratch that, since November 2016 or thereabouts when our old septic tank was replaced with a brand-spanking new system.

Reviewing what happened a few short months ago: 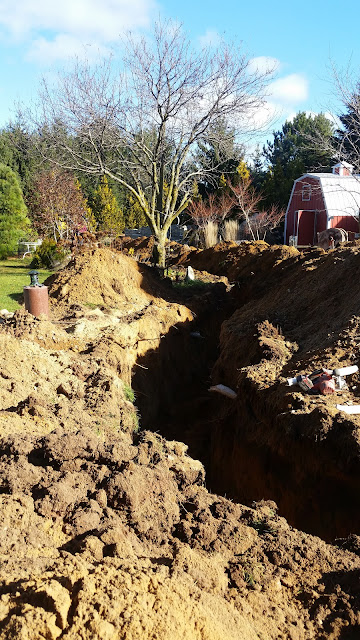 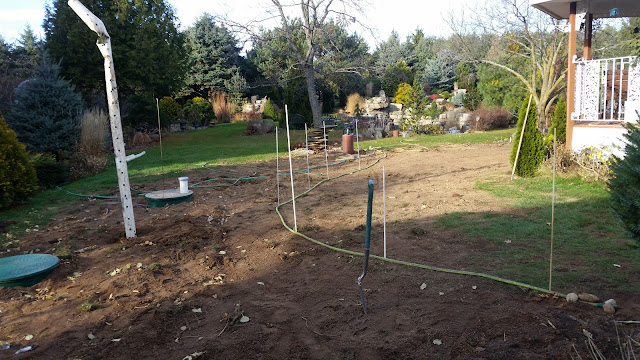 After a remarkably short time, the tanks were in place, the lines were buried and except for a missing lawn, things looked fairly normal again all in one day.

By that afternoon in November, we were already kicking the dirt around, trying to figure out how we were going to camouflage the new septic tank covers, whether or not we were going to reinstall the old River Bed and what about the gazebo?

The support posts buried in the ground for the last thirty-something years were rotting, should we rebuild it?  Should we move it? Could we move it?  I had an idea of where I'd like the gazebo's new home to be, in the area where the Tardig stood. 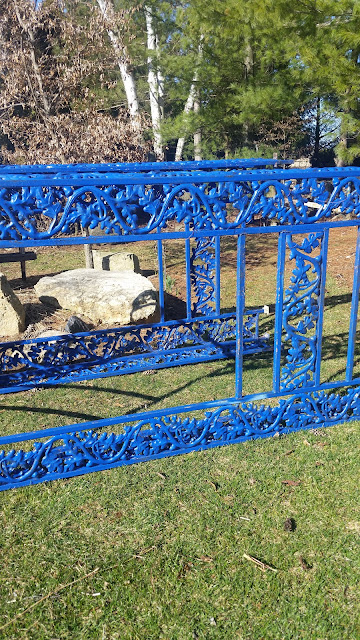 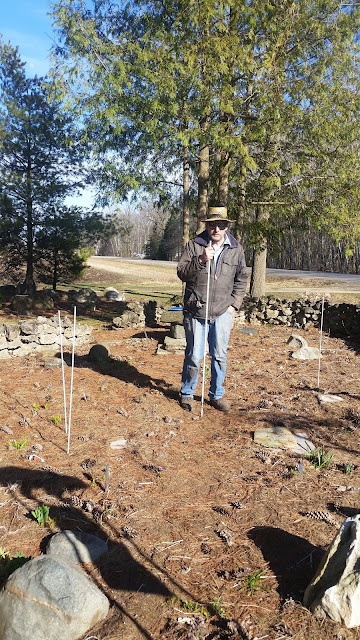 Back in late March, Carl obliged me by helping me move the Tardig out of the area and placed some fence posts where the gazebo would fit.   Happily, Carl was on board with my idea to move the gazebo, so now 'all' he had to do was figure out how to carry out the mission.

I polled our sons on the idea by text message; Joel thought it was a semi-doable plan; Dave's terse reply was, "Tear it down."  At this time in late March, Mom was living here with us and her vote was to try to move it.  Ok, the majority won.


I checked with our wonderful neighbors who own a large lifting machine about the possibility of them simply driving in the backyard and lifting the gazebo off the ground.  Warren came over and took a look and thought it shouldn't be a problem.   He would need to drive in our east driveway and go all the way around the garden, coming in on the lane to the northeast side of the Quarry.  Then he'd have to retrace his route with the gazebo dangling from a chain back to the road and into our driveway in front of the house.

We'd been having a lot of rain at the time, but since Warren is a busy farmer, we didn't want to bother him when it was time to be in the fields for spring planting.  The timing had to be just right; dry enough to move the gazebo, but not so dry that we were taking him away from farm work. We told Warren we'd give him a few days notice and set to work on getting ready for the move.

Carl is loathe to ask people for help and equally leery of borrowing equipment.  I don't blame him; usually when we borrow something from someone Murphy's Law graces us with a breakdown that possibly had nothing to do with us, but happened when we were in possession of the item.  Then you feel bad and end up replacing/fixing/buying what you borrowed anyway.   I reassured him with the thought that the worst thing that might happen would be if the gazebo fell apart when we tried to move it. (I'm great at reassuring people, am I not?)

Sadly, in the midst of moving preparations, Mom passed away.  After her funeral, I was rethinking the entire idea; maybe we should just tear the gazebo down, or maybe we should simply wait for it to fall down and just leave well enough alone.  But then Carl took me for a walk one afternoon at a park in Green Bay and we came across an area set aside for weddings, complete with a gazebo.

The park's gazebo looked so nice down on the ground instead of up on stilts as we had built ours.  Right then and there we decided it would be worth the effort to move our old gazebo.   The plan was back on. 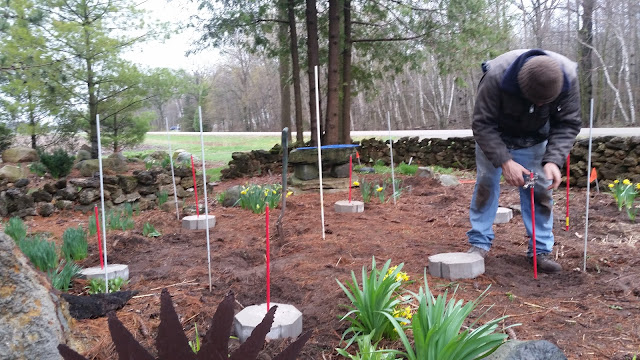 Carl worked on laying out the footings for the move just as the daffodils were coming up.  I was scurrying around digging up lilies as they emerged and replanting them. 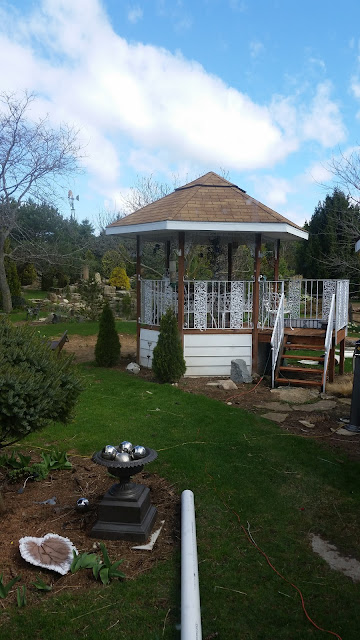 Every time I went in the back yard, I'd look at the gazebo and try to imagine it moved (and not a pile of parts on the ground if we failed.) 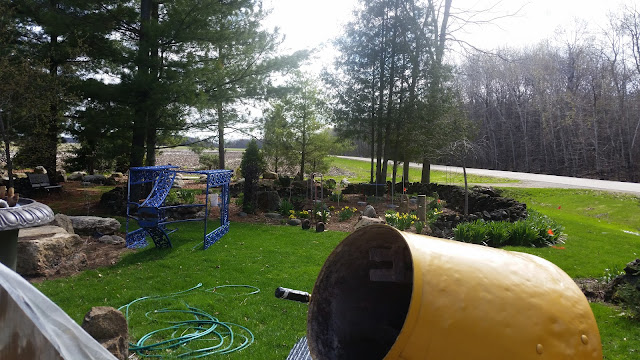 Construction on the new site continued, slowly but surely. 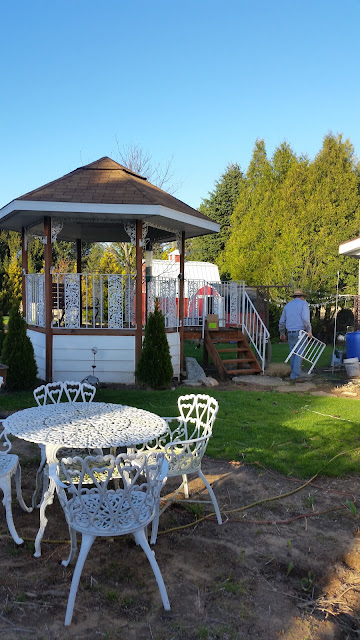 Carl began removing the attached deck and the railings he'd so carefully constructed decades ago. 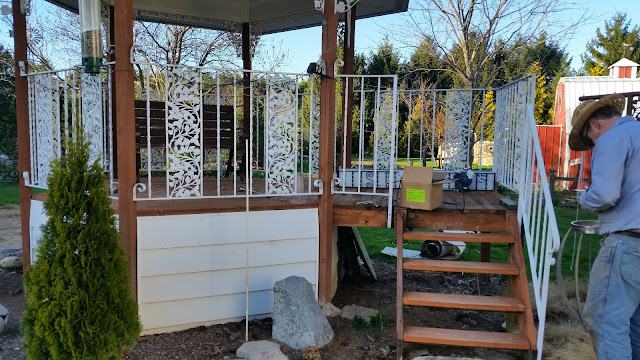 This was a bittersweet part of the move; I hope we can find somewhere else to use the railings..... 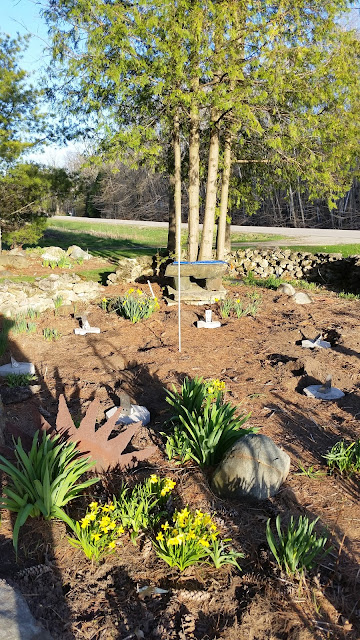 Carl had to do the math to figure out where the posts would end up after the move and bury the footings in the right places with the stainless steel post brackets in place. 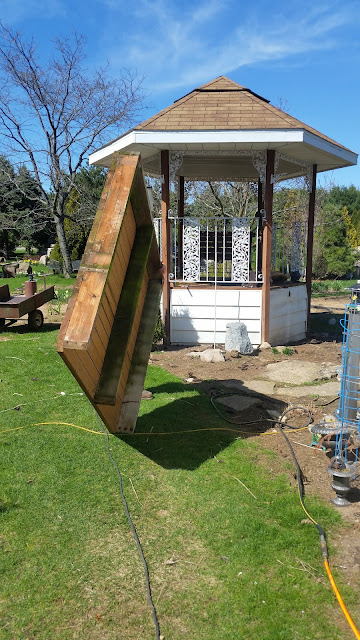 His next step was to remove the attached deck. 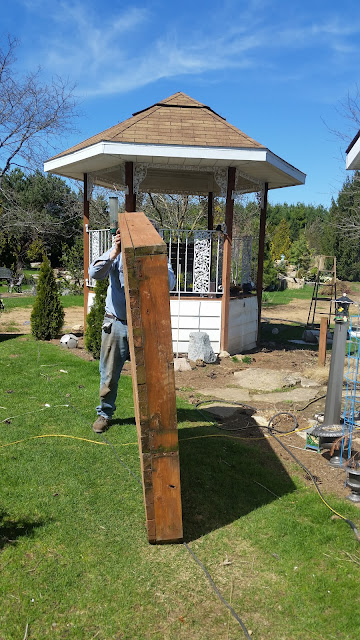 We used the old deck in the greenhouse for a plant shelf, so at least we had a use for it.  The park bench Grandpa Don built for us was carefully taken off the deck, too. 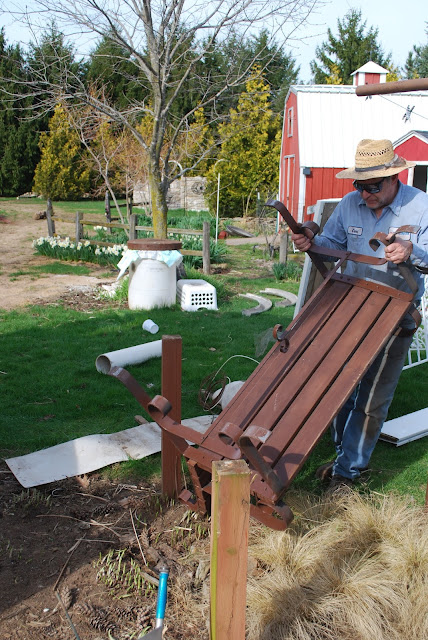 Finally after a few weeks, on April 24th to be exact, we were ready for the move.  I called Warren to set up a time.  He called back and said he'd be over in a half hour with his machine, also known as a telescoping handler.  I put a frenzied call out to David who came straight from work to help with the move.

Carl, David and I were scrambling around making last minute adjustments; the last thing Carl needed to do was saw off the old posts after the machine was attached to the gazebo's roof.  He couldn't saw them off until they were ready to lift the entire structure.

While Warren was driving around on our east driveway with his machine, I noticed I hadn't taken the solar lights off the railings, so as I was hurriedly unhooking them, I had my back to the incoming machine.  When I finally did look up to see how close Warren was to the gazebo, I was shocked; oh no, something awful happened!  Carl was up on a ladder, looking at me in consternation, "See what happens when we borrow other people's equipment?" 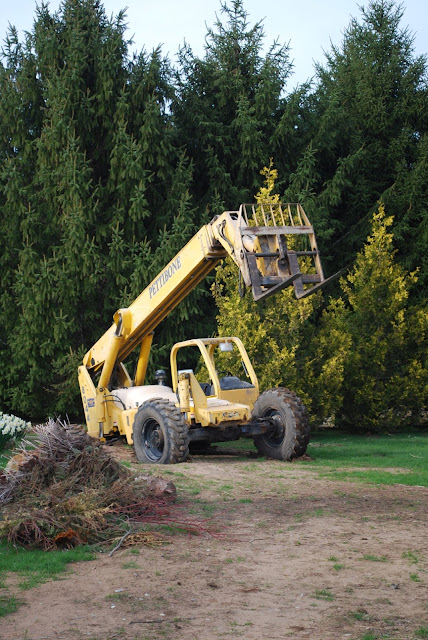 Did a wheel break off the machine? 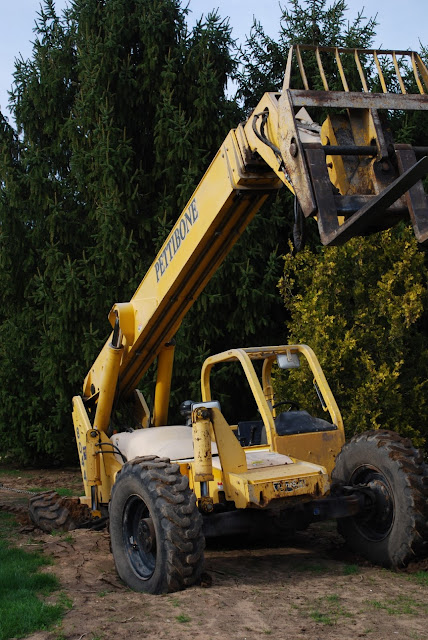 No, thank goodness, all the wheels were still intact, but he was definitely stuck. 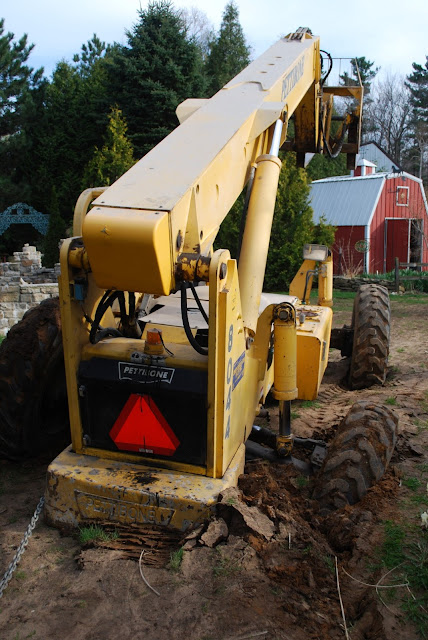 When the 30,000 pound machine drove over the septic tank lines buried in the back yard last fall, it sank to the counterweight on the back.  So close, and yet so far from our mission.  Thankfully, Carl had not yet cut the posts off the gazebo. 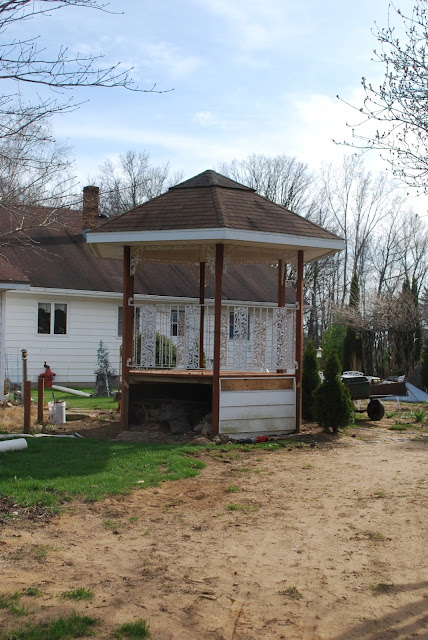 We had bigger problems now; how do we get the machine unstuck?  David went up to Mom's and retrieved the 574 to try to pull the machine out, but I knew my tractor wasn't going to be powerful enough.  Warren went home to get one of his big tractors instead. 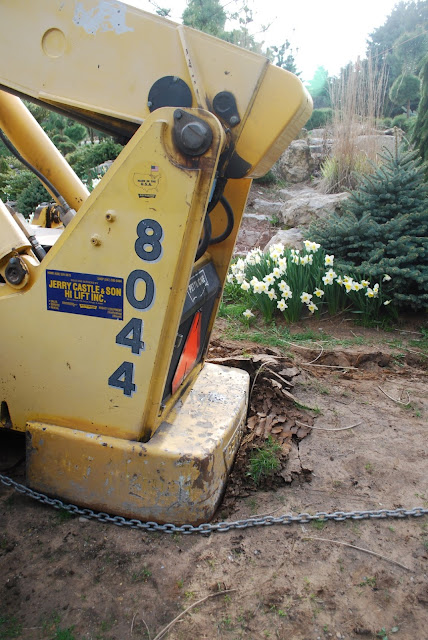 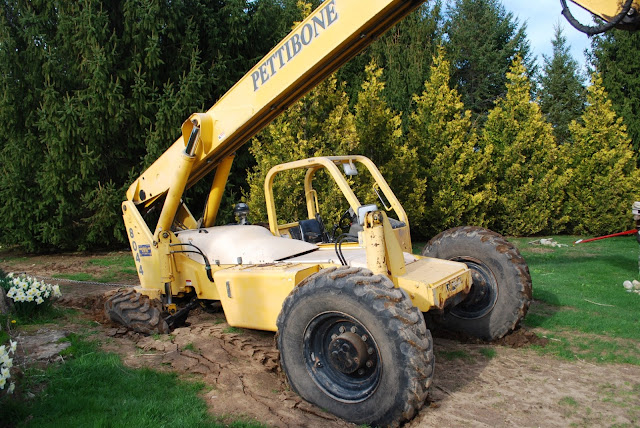 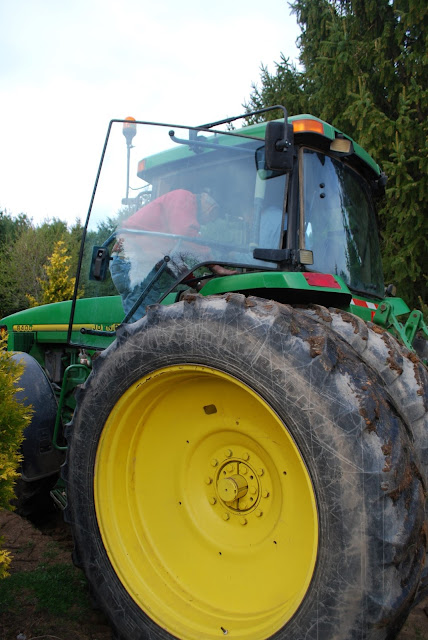 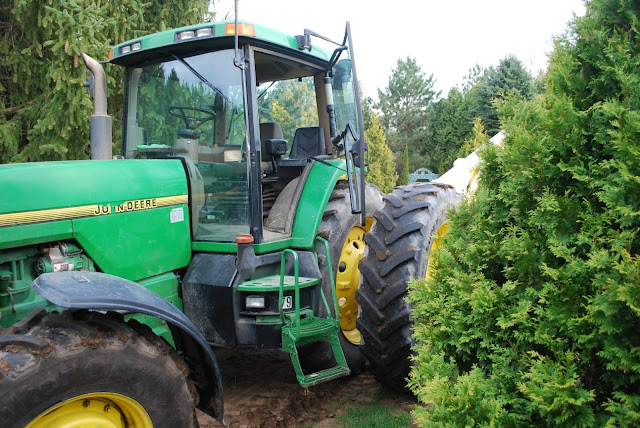 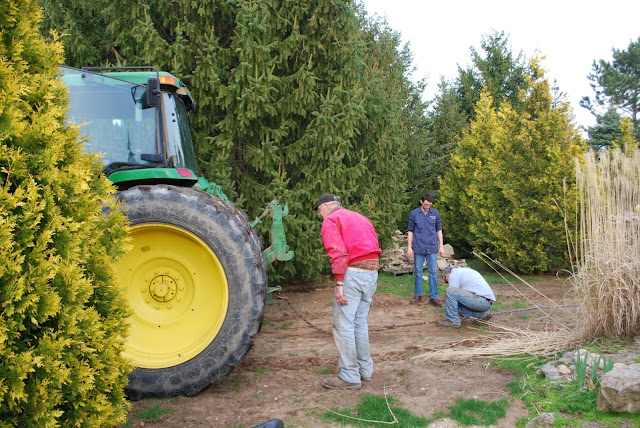 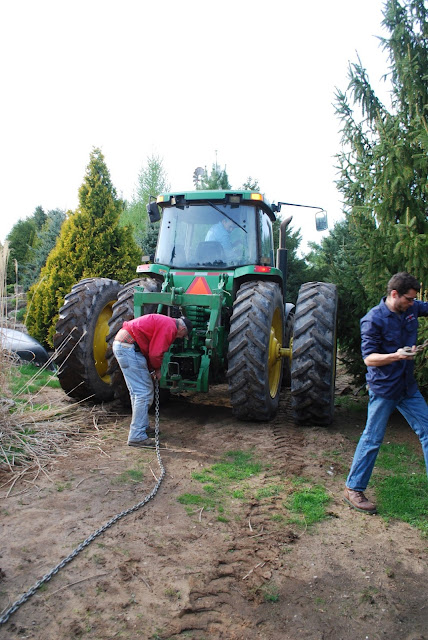 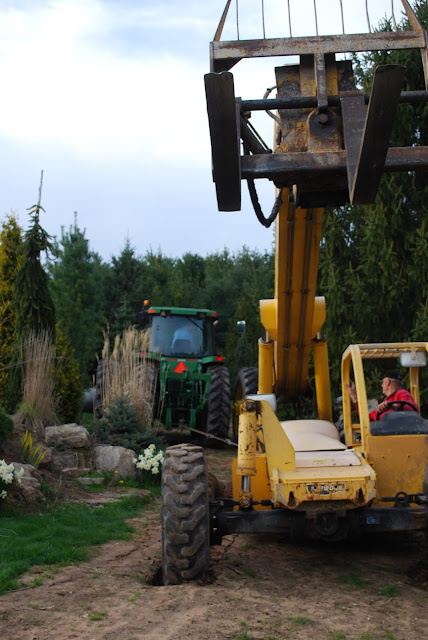 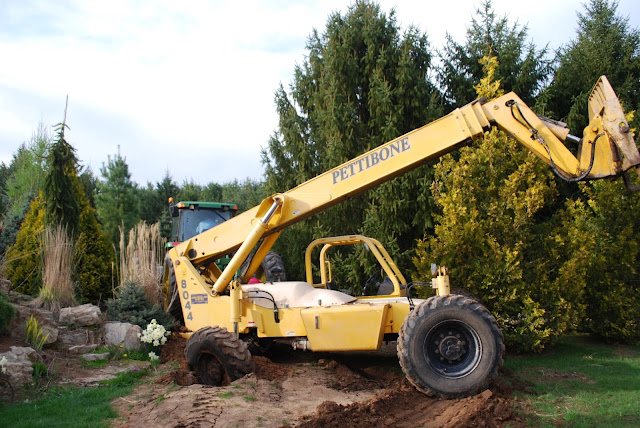 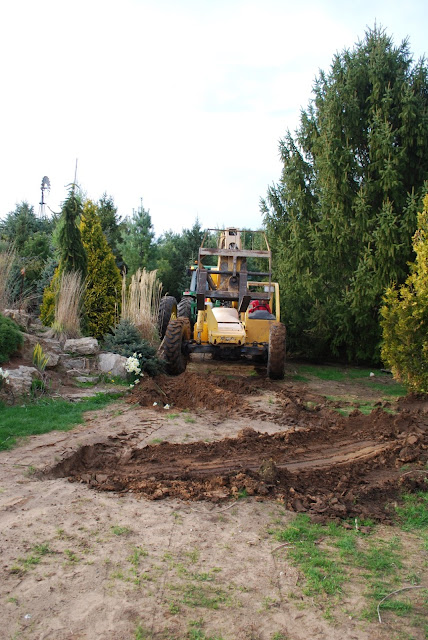 After another hour, we had the telescoping handler unstuck.  Luckily, nothing was broken, thank goodness.  Warren said we'd have to try again in a few weeks when the ground dried up some more.   He bid us a good night after he took the handler and his tractor back home.

Up next:  Take Two

Oh my gosh. I'm glad nothing was broken and I hope the move, when it does happen, will be uneventful.

I enjoy your posts immensely.

Whew! Thank goodness nothing was broken. Hearing about all of your rain recently, I'm now worried that the ground didn't yet dry enough to support the lifter. Waiting with bated breath to see what happens next.

Thank you, Rainey. Yes, we were very lucky we didn't break anything, I can't imagine buying or even repairing a new telescoping handler, ha! Our neighbors are wonderful.

Peter, no worries, things worked out (skipping ahead a bit!) I'm notorious for long-winded stories.

Huge project! You guys have been super busy. Good for you taking pictures of the whole project! I always seem to forget/avoid doing that. Can't wait to see the finished project.

Beth, the pictures are the problem for me posting about this, too! Getting them all in the post where I want them and uploading them with my slow internet connection is like molasses in January. :-)