So when we last left the saga, I was diagnosed with breast cancer and had made my decision to go flat.  (Which is a big change for this big girl; flat is not something I have ever been since I was a teenager.)

Carl and I left the 'team' meeting and headed back home once again.  I was told scheduling would be calling me with a surgery date, and the call came a few days later.

Ok, I had almost a month before the big, flat, surgery.

But first we had another big day coming up in a few weeks, the wedding of Alan and Leslie and a lot of work to get done.   Since we've never been responsible for an entire outdoor wedding before, the one thing no one can control is the weather.  The weekend before the wedding, it rained incessantly, 4" worth and we had standing puddles. 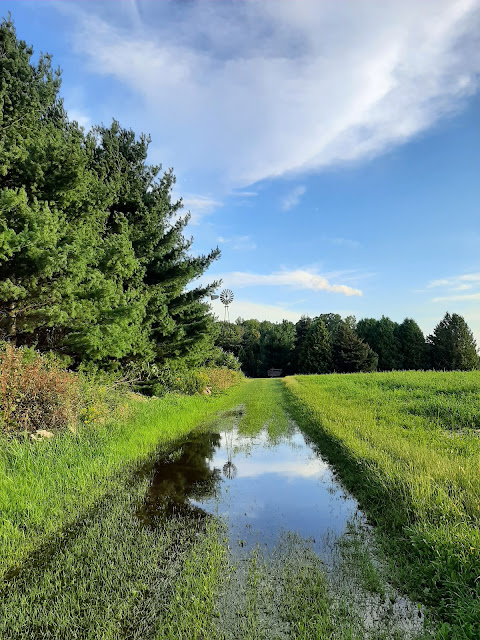 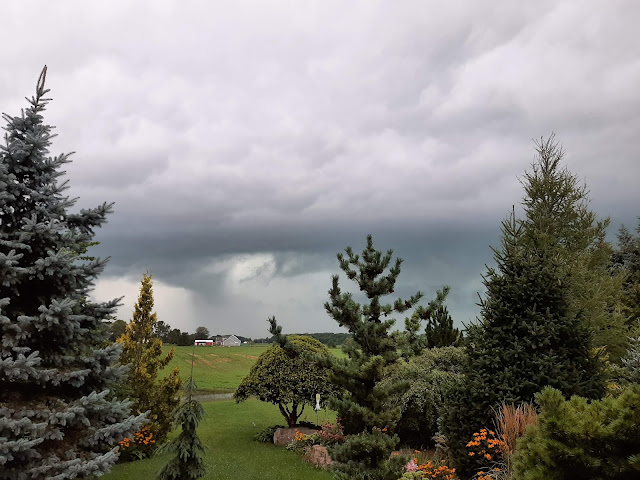 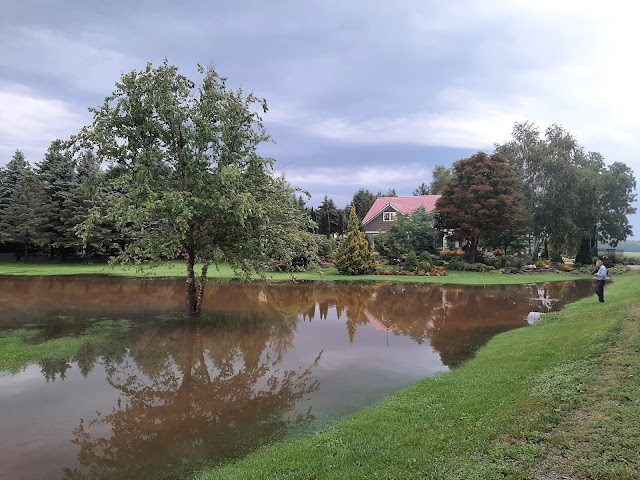 What would we do if the wedding weekend was a washout as well?  The couple had hired a caterer for the meal, and the tents and chairs were to be delivered, along with a dance floor, but we hoped for dry weather.  A soggy bridal couple and wedding guests would be no fun.

We had cut down seven large declining spruce trees to make room for the wedding tent three weeks before the wedding.  Since I've been absent from writing, I need to mention we acquired a used excavator for use on the farm this past spring.  It has come in so useful already and we will be using it to remodel some of the gardens around here, too, as well as take down my mother's house.  (If we had owned one of these machines back in 2001, it would have been a lot easier to toss the big rocks around in the quarry garden, that's for sure.) 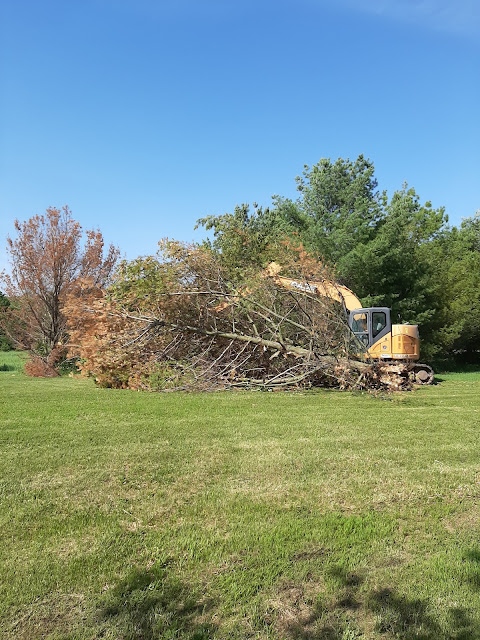 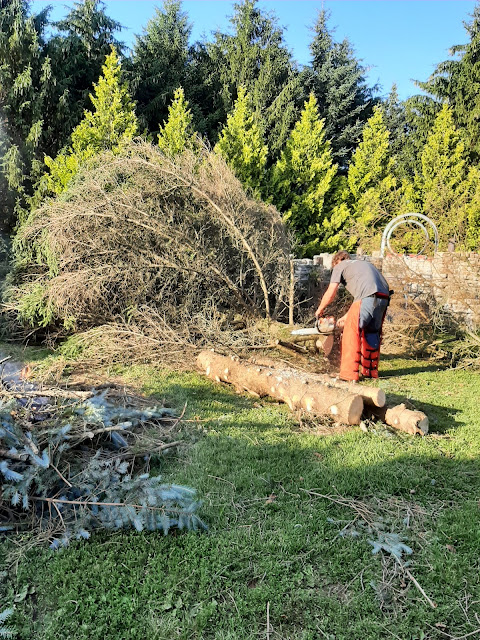 As usual, Joel hard at work helping his parental units with the garden.

I really wasn't on my game with the surgery pending in less than a month, so I didn't take as many photos as I normally would have.  We had Joel dig up the stumps from the old spruce trees and then replanted a new lawn which came up quite well, until the monsoon rains arrived and made the entire 'dance floor' area into a shallow 3" deep pond.

Carl and Joel rigged up sump pumps and pumped the water day in and day out.  Luckily, just a day or two before the wedding, the sun finally came out and the standing water was gone.  It was still soggy, though.

The groom, Alan, came out the day before the wedding and with Joel, supervised setting up the chairs for the ceremony, the tables and the signs.  He and Leslie did a wonderful job.

I wish I'd taken more pictures, but my mind was all in a tizzy.

Thankfully, Alan and Leslie's wedding day was picture perfect, no rain, pleasant temperatures and, thanks to Alan for having our yard sprayed for mosquitoes, no bugs during the ceremony. 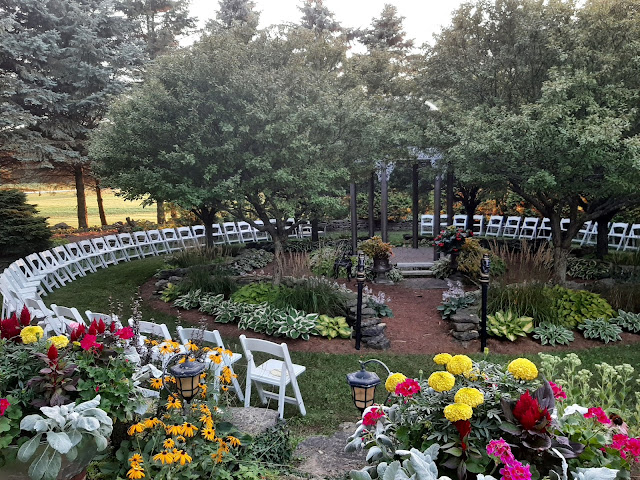 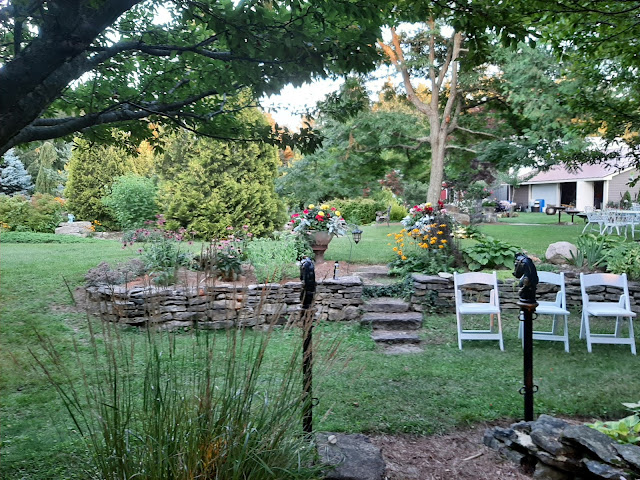 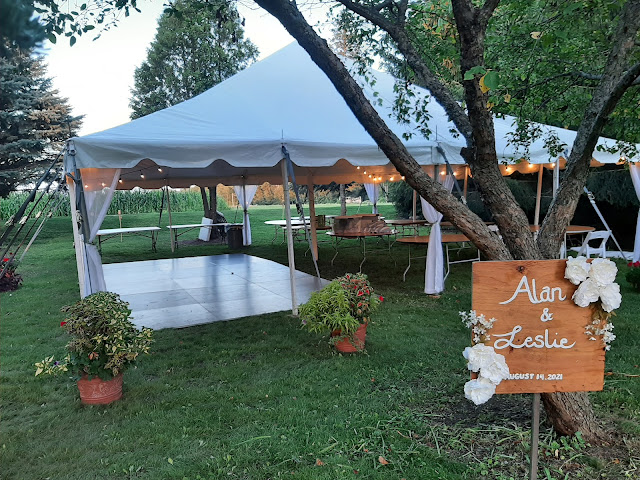 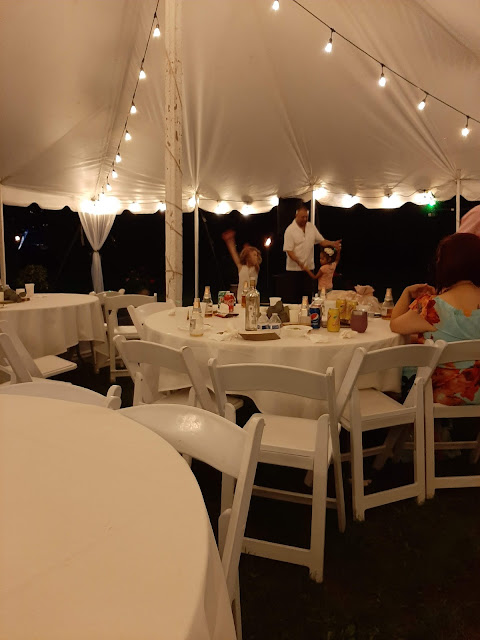 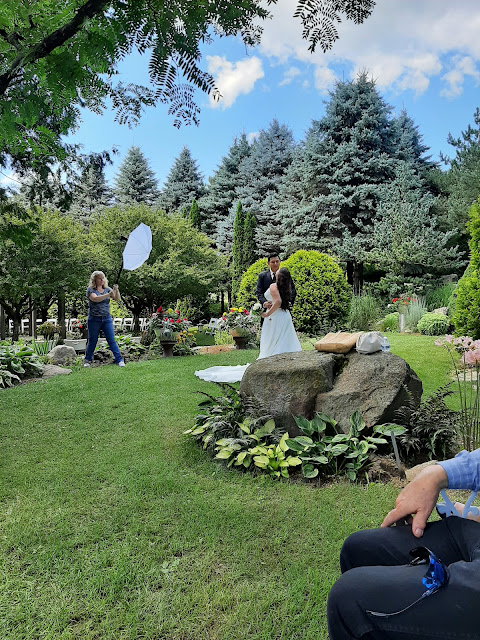 We were so happy for them!  They hired a Mariachi band to play for their wedding which was wonderful.  (I will have to see if I can do a post on their wedding using photos from the photographer.)

The wedding supper went beautifully, and the dance went on until around 10PM when the mosquitoes set in again.  The lights from the tent must have attracted them, but even though the evening was cut a little short, it was a beautiful wedding.

The next day was our annual booyah party and Joel was here bright and early with his friend Paul to start cooking for the crowd.  I didn't spend a great deal of time outside with the company as most of them were in the house surveying the remodel.  Once again, my hat is off to Joel for handling the outdoor activities.  Carl and I spent the day giving house tours.

Once the weekend was over, it was time to start cooking in preparation for my upcoming surgery.  I made large batches of lasagna, chili, soups, stews, and cookies and froze them.  I knew I wouldn't be cooking for quite some time.  Carl can cook, but this was going to be a hard time for both of us and besides, the cooking took my mind off of the surgery to come.

I also went around and took pictures of the garden as I knew I wouldn't be able to do much with the flowers after the surgery for some time. 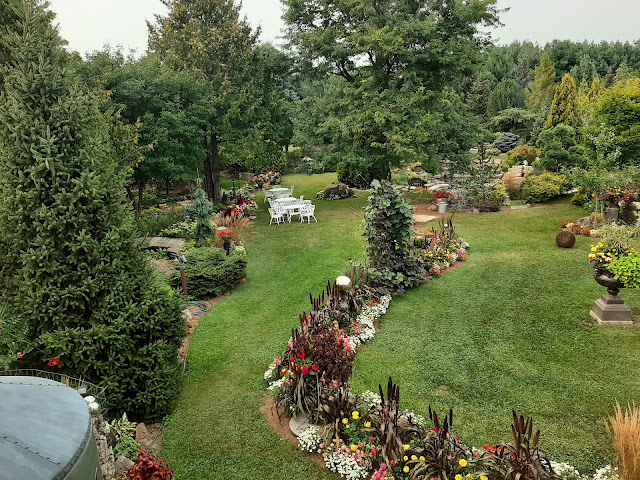 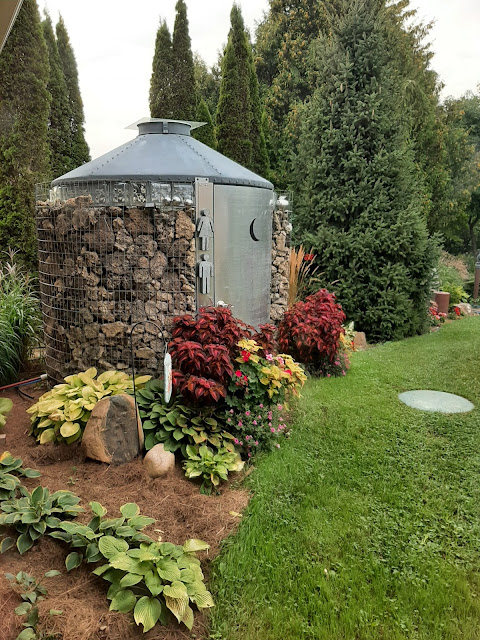 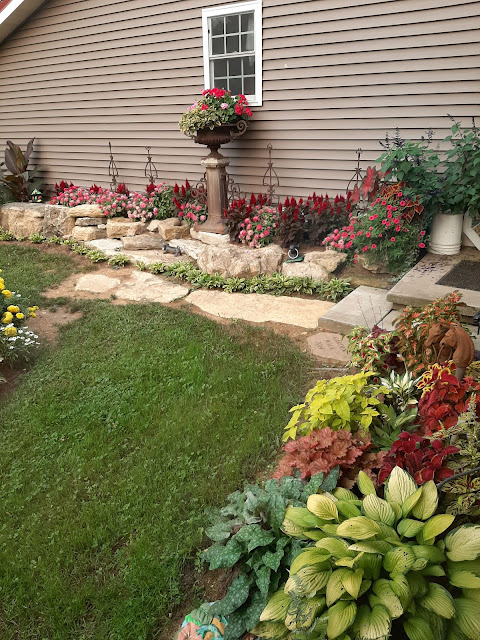 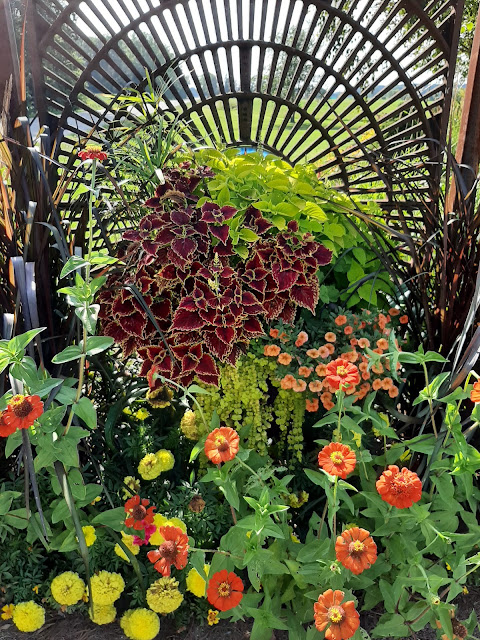 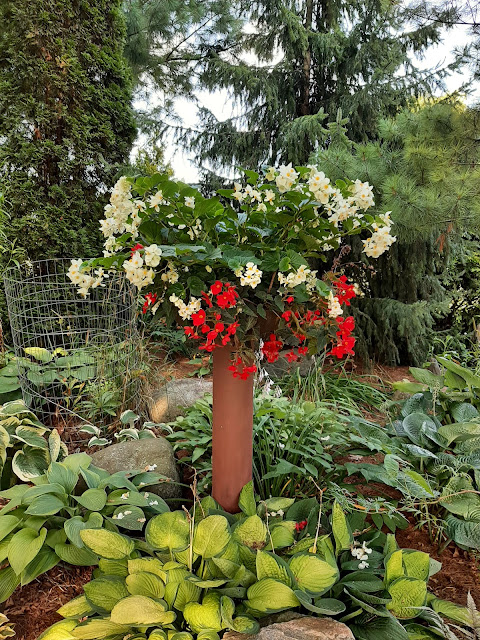 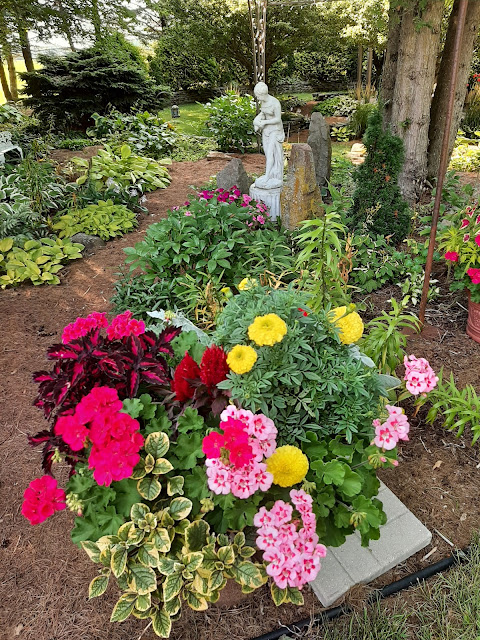 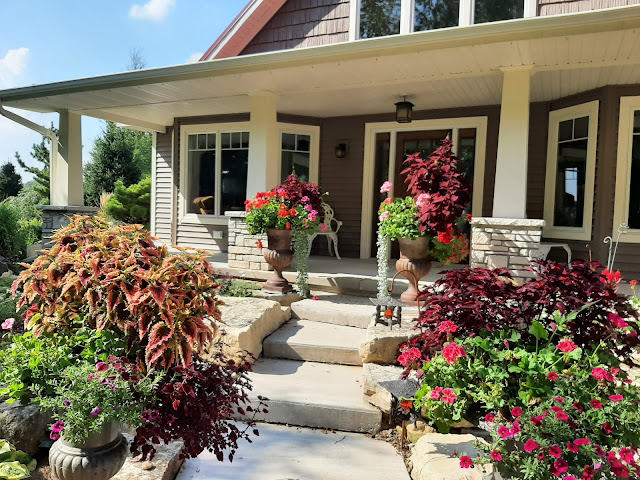 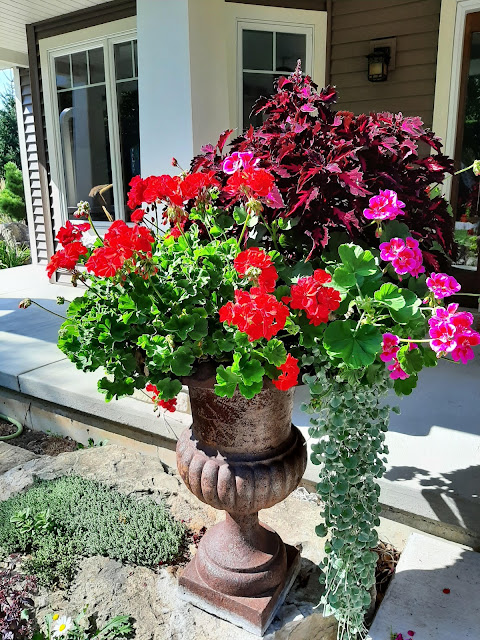 There were a lot of doctor appointments leading up to the surgery date.  Blood tests, covid test, heart monitoring, just to name a few.

Sunday night before my September 13 surgery, I was a bundle of nerves.  I was supposed to take a shower the night before with some special soap and again the morning of.  As I entered the shower Sunday night, I had a panic attack.  I'd never had one before, so I guess I can't say if it's exactly what happened, but I was a wreck.  I cried so hard standing under the water, letting it run over my head and down my body, knowing this would be the last time I'd be whole again.  I was scared.  Terrified.

After the crying jag passed, I felt a bit more calm.  I couldn't breathe, but I wasn't hysterical any longer.  We crawled into bed and I fought to sleep.  I had to be up again by 4AM to take another shower and report for surgery by 5AM.

We were in the car for the bleak drive into the hospital by 4:15 AM.  Neither of us said much; we both had heavy hearts.

The contrast between your beautiful garden pictures and the terrifying medical saga is so striking - so sorry you had to experience all the medical episodes. I hope writing about it is a comfort in some way.

Oh, so sorry you've had to go through this. It sounds like you made the right decision. And, oh my goodness, your garden and the wedding set-up are so beautiful!

Oh my Goodness, Karen. I've been periodically checking in on your blog for the past year, hoping to read more of your house remodel. As the months went by, I became concerned. I'm glad you shared your experience on the blog, your writing has always been spellbinding. I have experienced 'dense' mammograms too; they fill one with dread. You are very brave and strong, and surrounded by a loving family. I wish you worry free health from now on. God Bless.