Life as a Fat Flattie

Well, I've been gone a long time once again.  There's a lot to catch up on, so here goes.
I'm still recovering from my double mastectomy back in September of 2021.  I'd probably be further along with the healing process had I not needed a second, revision surgery to correct the mess the breast surgeon left behind.  I'm not a vain woman, but I cannot believe the surgeon was serious when she said she 'did the best she could'.  What I was left with was a travesty.  I have shown pictures of my scars to friends and their gasps of shock and disbelief say it all.

All I can say after going through the experience is this: Make sure the surgeon shows you pictures of their work. If I had seen what this doctor's results looked like, I'd have literally run from her.  There is a thing called 'Flat Denial' when it comes to doctors, and it's not right.

I was able to find a plastic surgeon who took on the challenge of correcting what she could on March 3, 2022.  Another surgery, twenty inches of incisions, drains, and compression garments.  Though the end result is not perfect, it is at least easier to look at myself in a mirror.  Sort of.

I've had so many doctor appointments; up to three times a week, and it's hard to get much done when we're constantly heading to one clinic or another.  Physical therapy has been a godsend for me, though.  I've had around fifteen sessions since last September and with work and luck, I've been able to regain a good part of my range of motion.  I still need to keep at the stretching for life now.

Since the tumor was removed entirely with surgery and I had no lymph node involvement, the next step was endocrine therapy with aromatase inhibitors for five to ten years.  I did try them for six and a half weeks, but the side effects made me miserable.  The oncologist wasn't thrilled with my decision to not take the drugs any longer, but he understood.  I have a ten percent chance of recurrence if I do not take them, which would be lowered to six percent if I did.  For as awful as I felt, four percent didn't seem to be enough of a benefit, and sad to say, there are no guarantees for any of us.

What many women don't realize (well, ok, perhaps this isn't a problem for thin women) but after a mastectomy, hiding in plain sight from me under what used to be bosoms, is a belly.  Many women in support groups refer to it as the 'Buddah Belly' which is pretty self-explanatory.  Once my ample chest was gone I look like Winnie the Pooh's long-lost cousin, Karen Pooh.  Ugh, it's not pretty.

I did not opt for reconstruction since, knowing me, I'd probably puncture an implant with a tree branch or tractor steering wheel.  Plus, the additional surgeries needed and more pain just doesn't seem worth it to me.  I decided to stay flat, which, with the exception of the botched surgery, I still do not regret.  Except, when I see my profile from the side.  As Piglet from the aforementioned Winnie the Pooh would say, "Oh, d.d.d.d.d.ear........!"  Oh dear, indeed.

Yes, I can be fitted for custom made prostheses, but I haven't taken that step yet.  From what I've heard, they are heavy, hot and annoying and I'd have to wear a bra again.  One perk of all of this is no more of those torture devices.  Still, I did invest in some relatively affordable, lightweight foam breast forms that I do like.  In addition, a kind organization made me some Knitted Knockers, which are also very nice.  I especially like having something to protect my scars and tender chest wall, and also a diversion from the stares I sometimes receive.

The biggest problem with the prosthetics during the summer is sweat.  In no time at all, the foam forms soak up the moisture and it's like wearing a wet sponge on your chest wall.  No fun!  So, pride out the window, I go flat and often forget about how I look.  That is, until a neighbor stopped in the other day.

I haven't seen this neighbor in over a year and in his defense, he didn't know about my surgery.  After a long look at me, he asked how I'd been.    I told him about the mastectomies and he said, "Yeah, I noticed."

Now, why this would bother me a bit, I don't know.  Of course it's obvious, it's just that I forget from time to time.  Then I get paranoid and think I should always make sure to have a prosthesis on so people aren't uncomfortable around me.  Then the sane part of me thinks why?  No matter what I do, people who know what happened look at me either way, if I'm flat or if I'm stuffing my shirt.

It's a strange turn of events to be self conscious at sixty-four years old about my chest, or lack thereof.  Before the breast cancer, when I was still well-endowed, I was always self conscious about whether my shirts were gapping or how I looked in certain garments, and had done my share of slouching in order to not 'put myself out there'.  I tried to hide the best I could.  Turn about is fair play, they say, so here I am, flat, and trying to do the opposite?  How silly.  Life is far too short.

When I do go out in public, I wear my fake boobs, or foobs, as many  of us in this 'club no one wants to be in' refer to prosthetics.  Women's clothes are cut for breasts, so it just looks better and balances out the ol' belly, too.

Carl and I are getting ready for a garden bus tour this coming Sunday and have been weeding like mad.  It was a very hot, humid day today and of course, I wasn't wearing the foobs at all, but wouldn't you know, I walked into the handle of the lawn seeder this afternoon, right in the scar line.  Ouch.  I'll survive, but it would have been better had I been sporting the foam rubber for protection.

So, anyway, enough about this topic.  Nothing like getting everything off my chest. 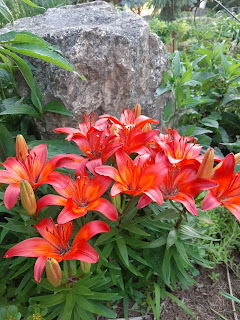 Oh dear, you've been through so much, Karen! So sorry to hear the surgeon made a mess of things. I hope your healing process will now continue to go well, and that you'll have a lovely summer. :)

I am so glad you are doing o.k. After your last post and the long inbetween I was worried. So glad to know you are getting along well. I hope you have a wonderful time this weekend! Please post again soon!

What an interesting perspective - Buddha Belly sounds like it would lead to serenity and contentment, doesn't it? I'm so sorry that your surgical recovery has been so complicated and LONG!

Hope the garden tour goes well - its amazing all that you manage to get done under the circumstances!

Oh my, I was so glad to find this post. I'd given up ever hearing how you are doing. I've read your blog for a while, often feeling the twinges of jealousy about your beautiful garden, but I have never commented. I was so horrified to read of your experience and I'm so glad you are back to gardening.
My sister introduced me to your blog and then I lost her to cancer, in 2017. She did stained glass.
Well. I am so happy you are back.

So happy to see this update and so sorry that you're having to go through this additional trauma. One day at a time and all those other time worn platitudes, but I truly wish rapid healing for you.

It's good to read a new post from you Karen.
What you've been through is an incredibly challenging ordeal, so I'm glad to see you haven't lost your sense of humor: your fantastic writing skills made me smile.
No matter our age, we are alway a little vain about our bodies, self conscious about how we look and what people think of us. I hope that as time passes, you'll get use to your new body and so will folks around you.
Best of health from now going forward!
I hope you can post about the garden tour next.

Oh my dear Karen ~ I've just caught up with your saga and my heart aches as to what you have been through, but my heart is also happy to see your wonderful sense of humor!! I love you dear friend. You are in my thoughts and prayers. ~ Give Carl a hug for me. ~ Love & hugs ~ FlowerLady