In late May, we made the decision to remove ten ailing blue spruce trees from the southwest side of the Formal Garden.  The trees were planted in 1992 and they had served their purpose.  Colorado blue spruce really don't last long in our high Wisconsin humidity and fall subject to needle cast in their twenties, leaving them with bare branches and looking very sad.  Time for a change.

We had a rock wall to move that was in the midst of the trees.  Joel came when he had time at night to lend us a hand. 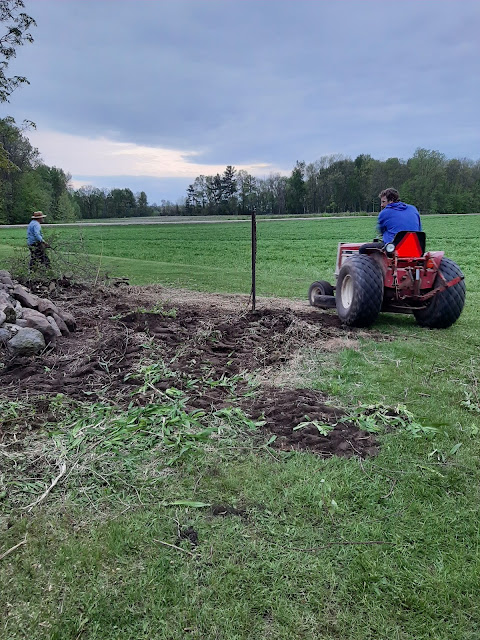 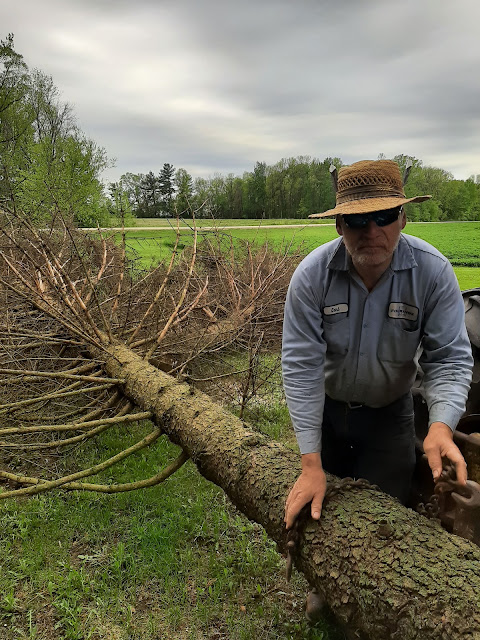 The spruce trees were really on their last legs.  In 2019, the year we remodeled (and the roof was off) we had water standing on the lawn (and in five gallon pails in the house) for months which took a toll on the trees. 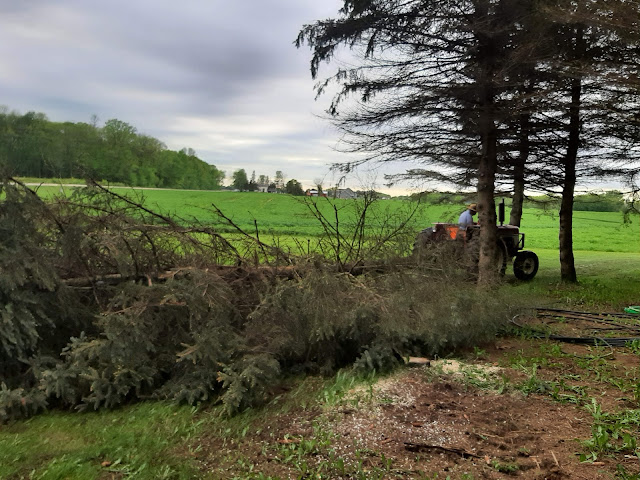 Carl and Joel cut the trees down and we limbed them up and made piles of the logs.  Luckily our neighbor was willing to take them for firewood. 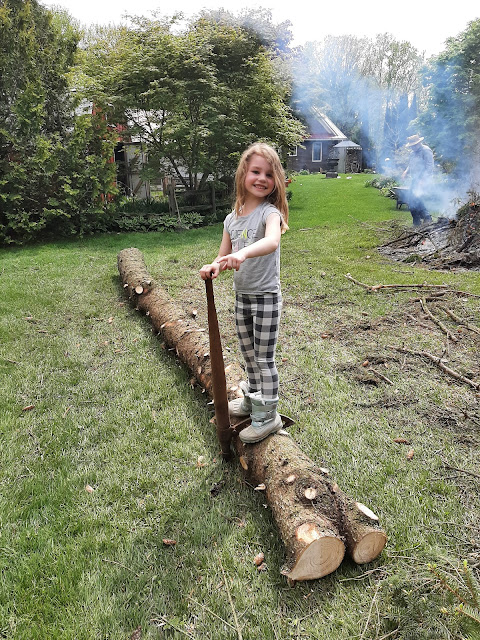 Our granddaughter, Audrey, just turned six and is a great help around the garden.  Here she is doing her best to use the cant hook to turn the log over. 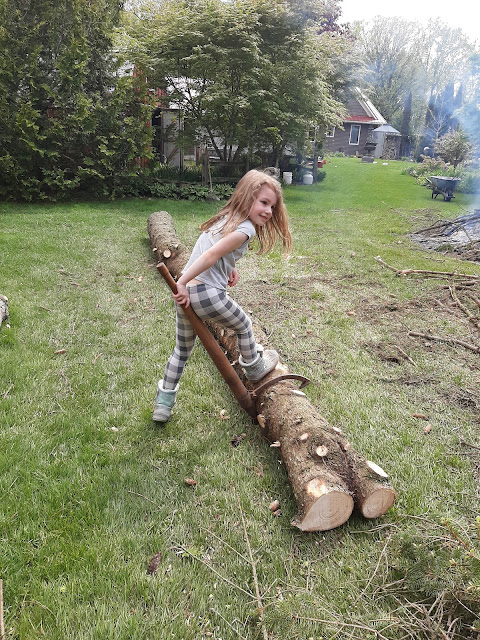 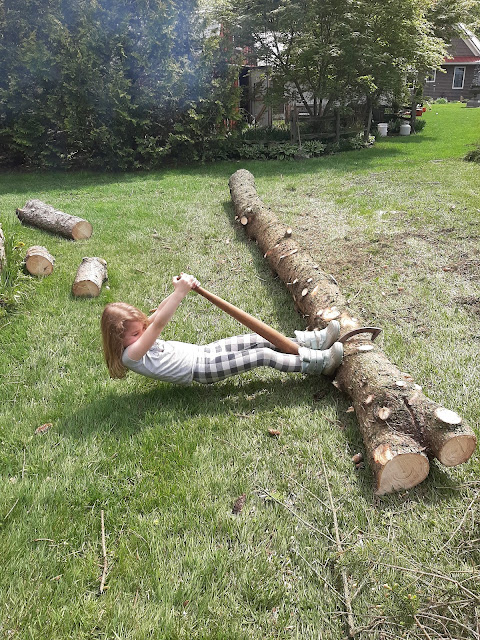 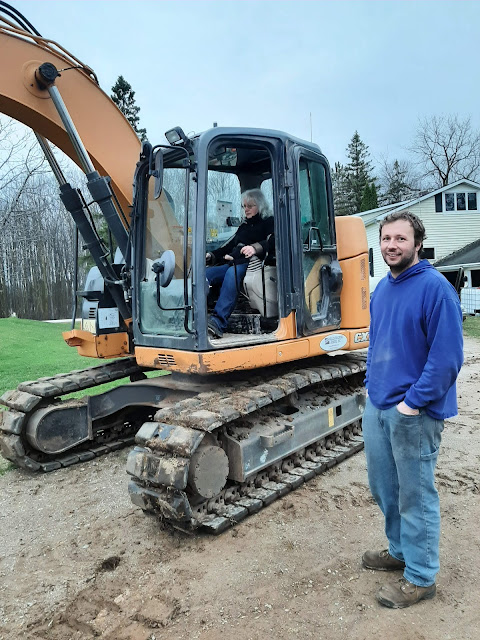 After the trees were cut down over the course of two weeks, the next step was removing the stumps.  Joel has been encouraging me to learn to drive the excavator, and with his tutelage, I was able to pick up some branches and rocks.  Digging stumps, however, I left up to him.

After the stumps were removed we decided to transplant some young cedars into the place the old spruce trees stood.  We'd bought just over a dozen two foot tall 'North Pole' arborvitae several years ago when they were on clearance at a big box store and planted them out back in a holding area in case we needed them someday.

Below, the start of the twelve trees being planted. 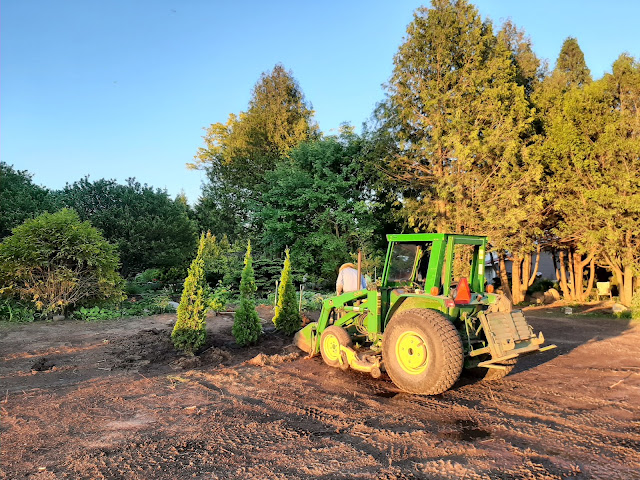 The 'North Pole' trees had grown to around five feet over the last few years and though they are definitely a lot smaller than the spruce they replaced, we're getting used to the view.  At first, there's always the panic of wondering if we've done the right thing after tree removal.  As fate would have it, the very next week the severe storm went through, so we probably would have lost the mature trees anyway.  As it was, all the young cedars were tipped out of the ground by the high winds, but after standing them back up, they are fine.

The tiny cedars in the foreground look pretty silly in comparison to the still-standing spruce in the background, but in time we hope it looks less goofy.  In the rest of the now sunny spot we've now got, we planted a small vegetable garden.  I bought some onion seeds this spring and was pleased when all 120 of them germinated, along with 50 green peppers, a dozen tomatoes and over 100 ground cherry plants.  I'm not sure what we'll do with all of the ground cherries, but the plants are already producing.

Further down in the lower part of the lawn, near to the creek bottom, we planted four River Birch as they can tolerate wetter soil conditions.  The trees are very small, but we got them for under $30 a piece and with a little luck, may see them grow a bit yet. 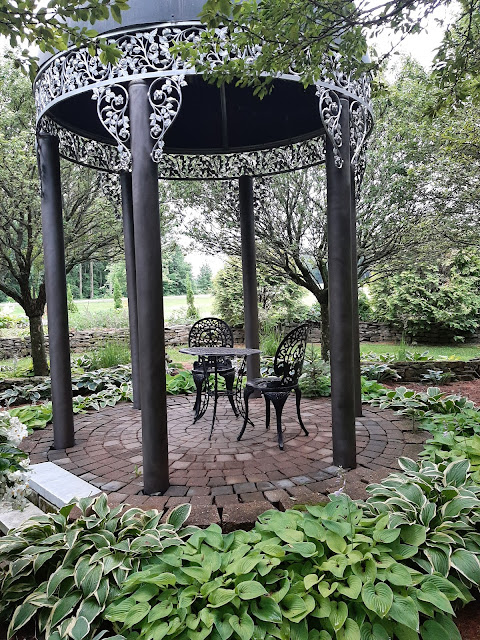 The old spruce trees had cast a lot of shade on the Formal Garden, but now that they're gone, the hostas don't seem to be suffering very much.  In fact, they seem to be enjoying the additional light.  The garden is less gloomy. 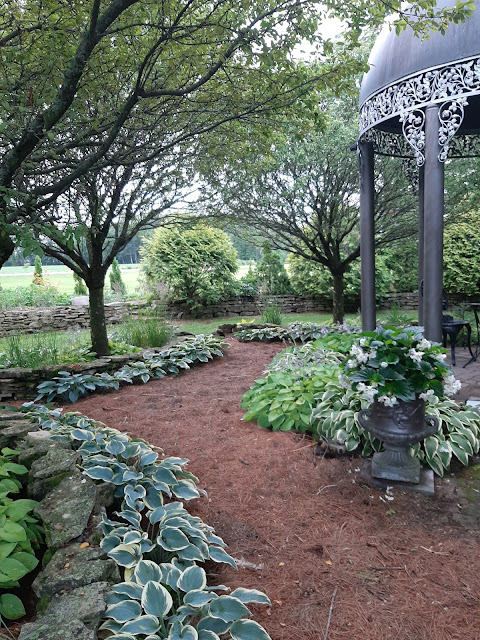 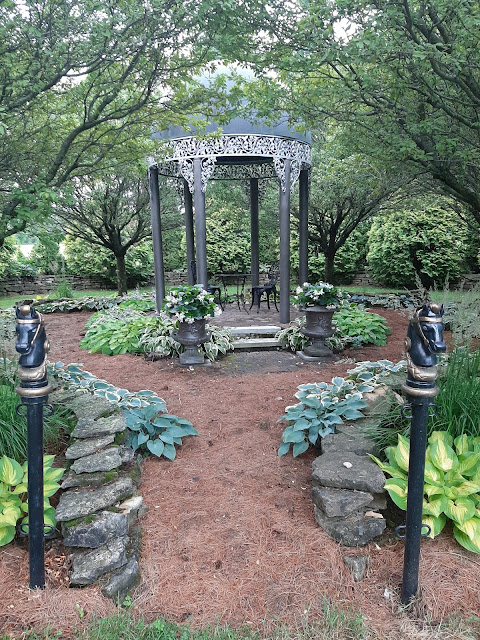 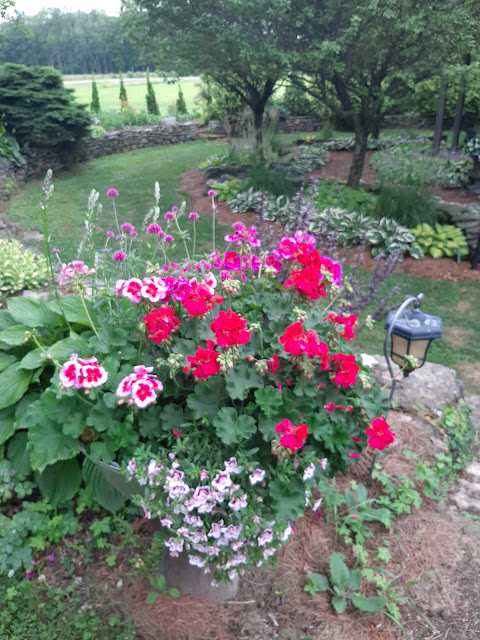 After the cedars were planted, we also removed two smaller raised beds that I'd given up on, 'Thing One and Thing Two'.  We are trying to downsize every year for the sake of maintenance.  My cancer diagnosis last year was the push we needed to make more sweeping changes faster, as the garden is too big for one person alone to handle.  We have to accept the fact we're not getting any younger and put more back into lawn and less into planting spaces. 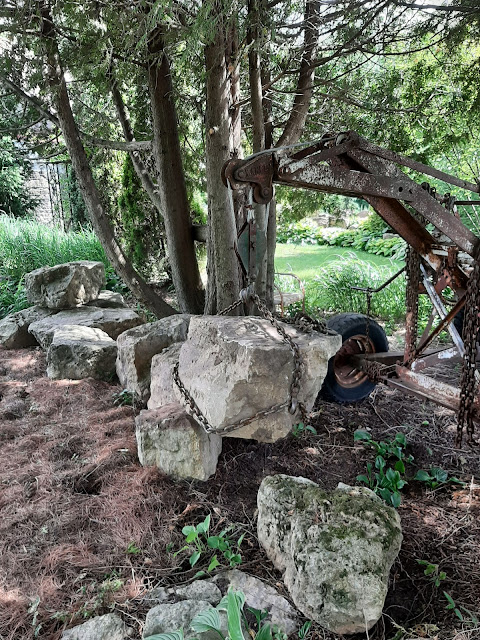 We took the big rocks from the two abandoned beds and made another small wall in the shady area by the old footbridge.  Rocks don't need weeding and it looks pretty good for now.  Thank goodness for the old wrecker.

Carl had another rock he wanted to bring over from his dad's place so he took our tractor and the wrecker to fetch it a few weeks ago.  I followed with the car as he had to go down the busy highway and two sideroads with the rock swinging to and fro. 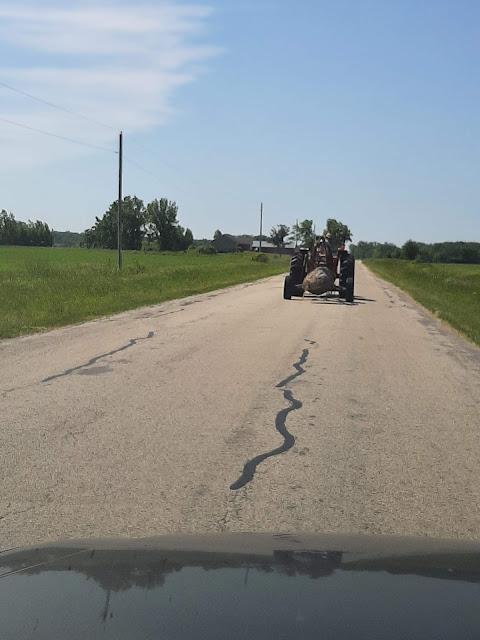 I kept my distance, but no worries, the rock stayed in the chains until we got home. 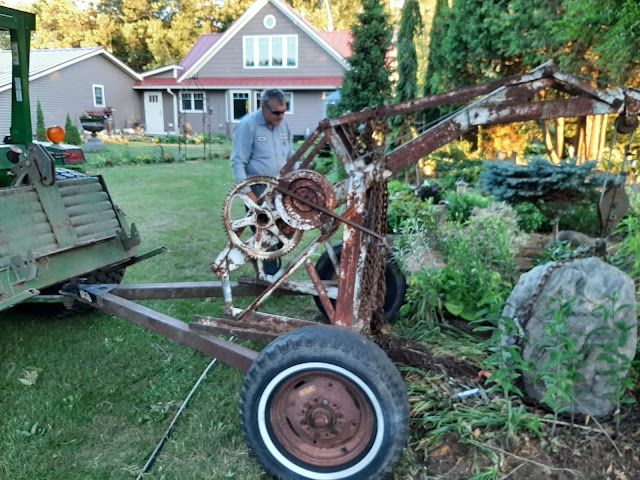 We placed it in the hosta bed in the backyard.  More rocks, less weeding.  (More headaches for whoever takes this place over after we're gone.)

I think this will be the only big garden project this year.  Weeding was the next thing to accomplish and we barely finished going through all the beds last week Saturday, just in time for the garden walk on Sunday, July 10.

In February a garden club called and asked if we would join five other gardens for a garden walk scheduled for July 23.  We agreed, but a few weeks ago, I received another call and the organizers decided the walk was canceled.  I did plant a lot more flowers this year in anticipation, but, well, stuff happens.  The July 10 group seemed to think the yard was ok.

The worst part of getting ready for garden walks, is getting ready for garden walks, if you know what I mean.  Weeding, primping, pruning, tidying up, putting hoses, wheelbarrows, stuff away, sweep the porch, wash the windows, rake the driveway, deadhead everything, it all takes a vast amount of time and energy.  It's almost like taking a final exam in school and being timed on the test.  When the bus pulls in, it's time to put down your shovels.  Time's up.

Anyway, the July 10 tour group was very kind and made all the work worth it.  It would have been nice to have two in a row since, as Carl says, 'The garden's all dressed up and has nowhere to go.'  If all goes well, we'll still have our annual booyah party in August, so at least a few more people will hopefully enjoy the views. 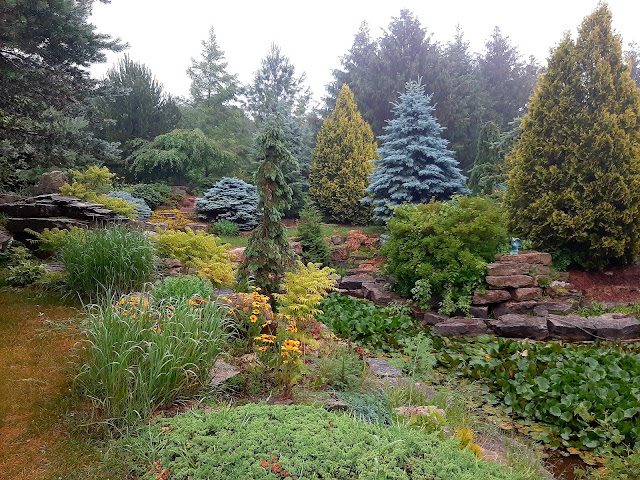 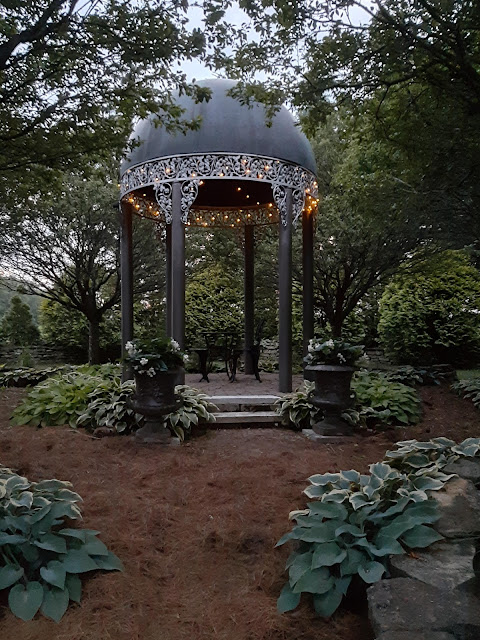 Our next step is to start at the beginning of the gardens and go through them one more time, weeding and deadheading, which shouldn't be as bad as the first time through, since we were able to mulch fairly heavily.  My back has been giving me a lot of trouble lately, even before gardening season (gardening actually makes it feel better, it's getting out of a chair and sleeping that's been a problem) so I was sent off to a pain management doctor for an MRI and found I have degenerative disc disease.  I went through two experimental injection sessions to the medial branch nerves which worked for a few hours, so the next step is to try a medial branch ablation procedure which may (or may not) provide relief for six months to a year or more.  The first procedure is the end of the month.  I'm not looking forward to it, but we'll see how it goes. 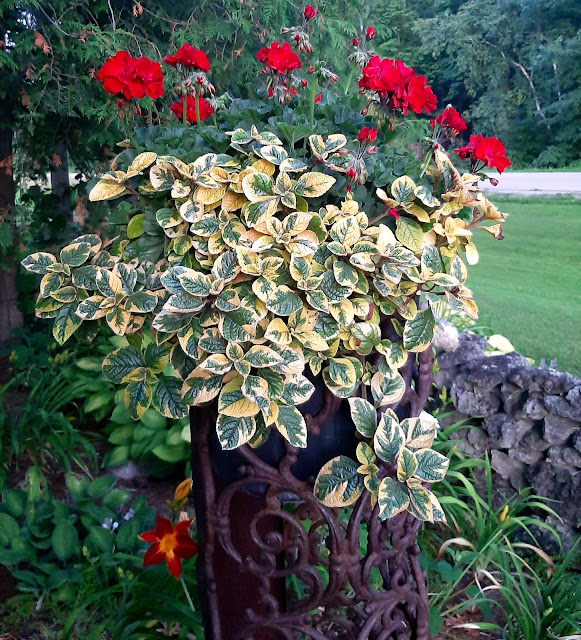 Maybe we'll have to switch to gardening in raised beds.

Lovely as always - I envy the visiting groups who get to see your gardens in person! Your grandchild gets cuter and cuter too - she seems like a happy child, so important.

It's amazing how grown Audrey is! A beautiful child, you must be a very proud.
Your garden looks fantastic; it is probably a good thing that a tour was coming through, to spur you on a massive undertaking. I know what you mean about trying to reduce garden maintenance: its an astonishing amount of work and no one's getting any younger :-D
Your conifers are a gorgeous sight, and I love seeing the hosta tapestry in the formal garden.
Chavli

Your garden is so beautiful.